The United Nations’ body for assessing climate change has just released the first component of its latest Assessment Report, eight years after the previous publication. It details the contribution of Working Group One of the Intergovernmental Panel on Climate Change (IPCC) to the Sixth Assessment, and is based on the physical science of climate change. The other two components are scheduled for release in 2022.

The IPCC prepares reports on the state of scientific knowledge on climate change and its impacts, and creates mitigation and adaptation scenarios. There have been six major Assessment Reports published since 1990, which are split into three sections based on the three Working Groups of the organisation.

The report documents the stark changes to glaciers that have been observed near-universally in recent decades. Key declarations state that global retreat of glaciers since the 1990s is very likely driven by human influence, whilst the synchronous nature of retreat of almost all glaciers worldwide is unprecedented in the last 2000 years. 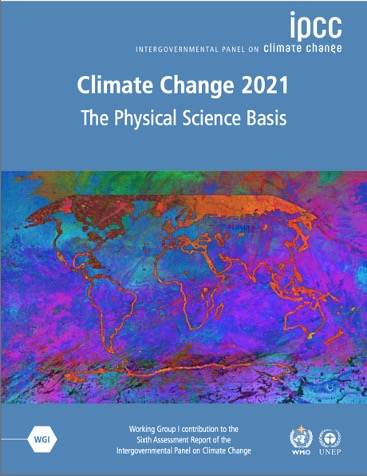 Cover page of the IPCC’s first report of the Sixth Assessment. Credit: IPCC

Glaciers feature predominantly in four of the twelve chapters. “Changes in glacier mass balance contribute to changes in sea level, but also have substantial implications for water supply for a substantial proportion of the population,” as introduced in Chapter Two, Changing State of the Climate System. This statement underscores the importance of glaciers within the physical science of climate change.

Since the IPCC’s 2019 Special Report on the Oceans and Cryosphere (SROCC), new regional estimates alongside two new global estimates of glacier observations have been published. The evidence suggests that from 2010 to 2019 glaciers lost more mass than in any other decade since the beginning of observational records, which is stated to be very high confidence. The availability of highly accurate data from individual glaciers as well as large-scale observations of entire mountain regions have contributed to this major advance since the Fifth Assessment (AR5) and the SROCC. Since then, a new study estimates that glaciers will lose 18 percent of their mass under RCP2.6 (low emissions) scenario and 36 percent under RCP8.5 (high emissions) scenario.

In Chapter Nine, Ocean, Cryosphere and Sea Level Change, detailed documentation of regional glacier observations is reported. The highest regional glacier mass losses were noted in the Southern Andes, Central Europe, Alaska, and Iceland. New reconstructions of the Patagonian Ice Sheet suggest glacial recession occurred faster during the last century than at any time in the Holocene. Glaciers in the European Alps are now smaller than they were in the 16th century, glaciers in Norway are now smaller than any time since the 9th century, and glaciers in Arctic Canada and Svalbard are smaller than they were in the last 4000 years. 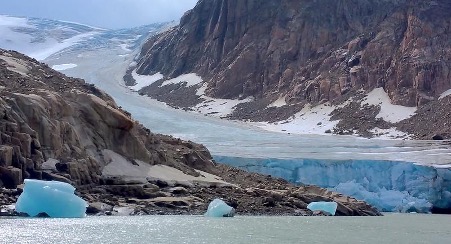 Grinnell Glacier on Baffin Island, Arctic Canada, which is now smaller than at any point in the last 40,000 years. Credit Gregory Smith/Flickr.

The changing contribution of glaciers to water supply is discussed in Chapter Eight, Water Cycle Changes. In general, AR6 compiles numerous pieces of evidence that in glacier fed basins runoff may increase in the near term, but then decrease from thereon as mass is completely lost from glaciers. Under a mid-range emissions scenario, glaciers in the Himalaya and Central Asia are projected to reach peak runoff somewhere between now and 2040, whilst peak runoff for low-latitude Andean glacier-fed rivers has already passed. Both of these regions sustain very large populations that rely on glacial water supplies.

Another important topic was glacier contribution to sea level rise. New modelling evidence estimates that ice loss from glaciers contributed to 22 percent of sea level rise from 1971 to 2018. There is now high confidence that ice sheet and glacier melt were the dominant contributors to global mean sea level rise from 2006 to 2018. Nonetheless, it is still stated that current generation climate models do not fully account for many of the key components of the sea level budget, such as glaciers and ice sheets. The contribution from glaciers excluded that from the peripheral glaciers of the Greenland and Antarctic Ice Sheets. Growing scientific concern has been linked to the large outlet glaciers that currently hold back large sections of the West Antarctic Ice Sheet, as they account for Antarctica’s greatest contribution to sea level. AR6 reported with very high confidence that Antarctic ice loss is dominated by the acceleration, retreat and rapid thinning of these outlet glaciers, which is very likely driven by the warming ocean waters that underlie and adjoin the ice shelves.

Although both AR5 and SROCC attributed atmospheric warming as the (very) likely primary driver of glacier retreat, a new study that modelled 37 glaciers worldwide concluded that observed length changes would not have occurred without anthropogenic climate change. The same model was used to estimate that 85 percent of cumulative glacier mass loss since 1850 is attributable to human influence. 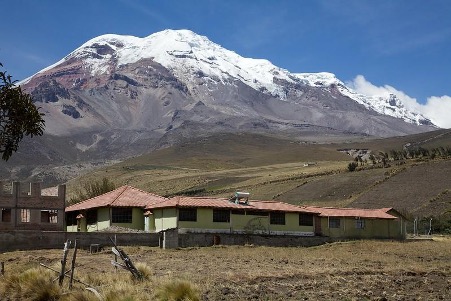 Chimborazo Volcano in Ecuador, the highest peak in the country. The summit is covered entirely by glaciers, but new evidence has found that peak run-off of rivers fed by these glaciers has now passed, threatening water resources in the region. Credit: David Brossard/Flickr

Miriam Jackson, a glaciologist at ICIMOD and a lead author on SROCC, spoke with GlacierHub about the significance of Assessment Report Six (AR6) in comparison to previous IPCC publications. She explained “things are being said with greater confidence, we know so much more now and know it much better.” Since AR5 and the SROCC, the pace at which scientific studies have been conducted and research published has picked up, explained Jackson. Despite the planning of AR6 being disrupted by the pandemic, Jackson remarked that its publication demonstrates “we can make big changes and survive them.” Although the report demonstrates we are irreversibly committed to changes in the world’s climate system, there is still an opportunity to cut emissions and keep within the 1.5℃ warming as set forth in the Paris Agreement, which would have significant consequences for glacial retreat.

Jackson went on to explain that this latest release of information will be very useful for the upcoming COP26 in Glasgow this November. Talks held at the event can fall back on this document for evidence and explanation. “This is what you need to know and this is what is happening, it’s very accessible information,” Jackson remarked.

Next year, reports on Climate Change Impacts, Adaptation and Vulnerability, as well as Mitigation of Climate Change are due to be published as part of the Sixth Assessment by the IPCC.

Among the many details in AR6, lies a salient point: glaciers offer a powerful demonstration on the importance of imminently reducing emissions. There will be enormous consequences cascading from the decisions made when countries gather together at COP26 in a few short months.

These are places that belong to time and not to any individual. That we are all collectively responsible is shocking. Why is it so impossible to unite globally and heal our beautiful blue home? Why do we care so little?

It’s so crazy and such a seeming obvious alarm bell. I remember glaciers in Alaska that were huge when I was a kid… That are just a shadow of their former selves.