Narrating Landscapes: How Indigenous Storytelling Can Unlock Our Environment’s Past

The Blackfoot Tribe has historically inhabited the northwestern plains of North America, where their territory spanned from the North Saskatchewan River to the Yellowstone River. Imposing peaks, expansive valleys, fast-flowing rivers— this landscape’s features are central to the Blackfoot’s rich oral history, which contains hundreds of living stories that have been passed down for generations. Although the stories hold a wealth of knowledge about the land, long-standing divisions between Western scientific standards and Indigenous traditions have isolated these stories from academia. However, a new study bridging glaciological research in the Rocky Mountains with Blackfoot creation stories has shown that Indigenous traditions can greatly enrich our understanding of the North American paleolandscapes. 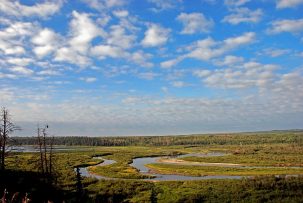 The Blackfoot, like many other Indigenous Peoples, possess an oral tradition that has been passed down for centuries. At its center are creation stories, which focus on the Creator Old Man, or Napi. Exploring these creation stories, anthropologists María Nieves Zedeño, Evelyn Pickering, and François Lanoë at the University of Arizona found striking parallels to our current scientific understanding of the Rocky Mountains’ glacial history and the settling of North America during the Last Glacial Maximum, when much of the planet was still covered in ice. In the face of anthropological and geological uncertainties, Native American creation stories, like Blackfoot Napi stories, can provide narrative evidence of migration and illuminate certain details of people’s journey into North America.

Analysis of fossils and land composition has shown that at the end of the last Ice Age, groups of people were able to migrate into North America through the Beringia land bridge, a stretch of land that emerged as sea levels fell due to water becoming trapped in glaciers. These were the direct ancestors of contemporary Native American and East Asian populations, suggesting that the stories told today may carry evidence of these first migrations.

One such story tells of the tribe’s passage across an icy expanse. Led by Napi, a young boy sees a horn sticking out of the ice. When his mother attempts to cut the horn out of the ice for him, the ice splits in two and divides the people. Only half of the tribe is able to continue onwards and reach the land that they had come to settle. This story appears to refer to a stretch of land similar to the ice-free corridor, a hypothesized migration route that was identified by analyzing and dating bison fossils from the region. Not only does the story give us insight into a possible migration path, but it also allows us to imagine this migration through a human perspective, reminding us of the challenges these early people may have faced as they crossed into new land.

Other stories from tribes around North America bear similar connections to our understanding of the Pleistocene. Several tales from the Arikara Nation in North Dakota depict expansive bodies of water that correspond to proglacial lakes formed by retreating ice sheets around 15,000 years ago, while some Pawnee stories describe floods that could have occurred during the formation of several glacial lakes in Western Montana.

The connection between Indigenous knowledge—stories, traditions, rituals—and Western science is a useful nexus for understanding the distant past, as exemplified by the relationship between Blackfoot creation stories and paleoclimatological research on the Pleistocene. But finding the parallels, let alone confirming them, can be challenging. As Zedeño, Pickering, and Lanoë point out, Indigenous knowledge has been considered invalid, treated as superstition, and suppressed by Western colonizers who sought to erase Indigenous communities for centuries. Additionally, efforts to make Indigenous knowledge conform to scientific convention tended to strip away the respect that a story demands within Indigenous communities. A story, told by a revered elder who has devoted his or her life to carrying the community’s narrative identity, is not just a story as a Western audience might think of it, but an “object” that carries history, physical rituals, names, and language.

This method of storytelling doesn’t always conform to scientific approaches that seek to dissect and isolate information; instead, it is an integrated wealth of information that draws from years of coexisting with the landscape a tribe inhabits. Western data-gathering rendered this knowledge static, contradicting the essential living quality of storytelling. In an interview with GlacierHub, Rhiannon Stephens, a professor of history at Columbia University, said that “studying oral tradition means being open to not making everything commensurate. Even if you don’t get every last detail from the oral tradition, it’s just amazing.” 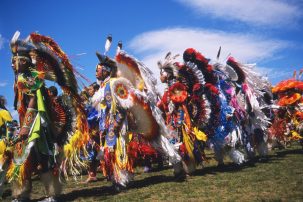 A Powwow on the Blackfeet Reservation.
Source: Rick and Susie Graetz/ University of Montana

To fully understand and blend Indigenous knowledge with Western science, it is vital for Western researchers to rethink their approach to collaborating with Native American communities. In recent years, several Indigenous scholars have advocated for the validity of Indigenous knowledge within science. Robin Wall Kimmerer, an enrolled member of the Citizen Potawatomi Nation, brought together the two lenses in relation to the study of botany in her widely-recognized work, Braiding Sweetgrass, arguing for Western academics to holistically approach environmental studies and inform their practice with Indigenous knowledge. Leroy Little Bear, a preeminent Blackfoot researcher, compared Native observations of the universe’s behavior and quantum physics in order to illustrate the synchronicity of the two frameworks in a 2015 lecture at the Banff Centre for Arts and Creativity.

While efforts towards collaboration are growing from both sides, there are still many questions surrounding best practices for combining Indigenous knowledge and scientific study. What should the temporal limits of such research be? Can long-term shifts in landscape truly be observed from the perspective of a human lifespan? Finding direct connections between Indigenous stories and geological history requires bridging vast cultural and linguistic differences, and Western scientists searching for analogs between their own practices and those of Indigenous storytelling often fall short and create misplaced or incorrect implications.

In an interview with GlacierHub, Kristin Ruppel, a professor of Native American Studies at Montana State University, explained how comparisons between Western research practices, such as peer review—a fundamental part of the academic process—and storytelling perpetuate misconceptions of Indigenous traditions. “It’s an organic thing where you have elders and younger people looking to each other for corrections, speaking the language, telling a story.” Continuing, Ruppel noted that “Peer review trivializes it— these are analogous, maybe, to one another, to get non-natives some kind of understanding that these are not just folk stories… [they] are a much deeper thing that has consequences for the individuals that are involved and the community.”

To compare the stories to the peer review process strips away just how meaningful the storytelling tradition is within Indigenous communities and reinforces a tradition that’s been present in Indigenous-Western relations for centuries: reducing an Indigenous practice to a Western vocabulary and incorrectly trying to transpose it into an alien framework.

Despite the challenges posed by a collaborative investigation of Native American oral tradition and scientific data, efforts to develop a practice of unifying these different knowledge systems continue. Many researchers have proposed holistic comparisons of stories with archaeological findings, outlining the parallels between certain repeated images and the topography of early North America. But flawed methods of collaboration, if left unaddressed, could lead to great losses of knowledge. Indigenous languages are at an extreme risk of extinction; as these languages fade, so do the stories they carry, which means that the development of best practices for collaboration is in a perilous race against time.

Julie Cruikshank, a professor of anthropology at the University of British Columbia who has led extensive research collaborations with Indigenous people in the Yukon, told GlacierHub that “the main thing I learned in my work is that scientists and social scientists working in Indigenous communities really need to treat Indigenous colleagues as colleagues, rather than as ‘informants.’” Reimagining the process of working with Indigenous communities could take years, but the power of complementing science with oral tradition has great potential.

The memories held in stories can lend a history of movement to a river’s path and remind us of all the details a landscape can hold. Combining stories with research data allows our perspective of our world’s past to come alive at a more human level, revealing to us portraits of the land we otherwise may never have been able to envision.

This is a thoughtfully written piece on how important it is to respect indigenous knowledge in its own tradition, not just as a way to ‘validate’ western scientific work.

Thanks for pointing out the exploitative tendency in academia regarding indigenous knowledge..