pharmaceuticals Archives - State of the Planet 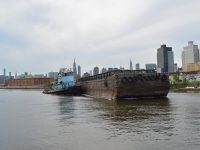 Researchers Map High Levels of Drugs in the Hudson River

In a new study, researchers have mapped out a large variety of discarded pharmaceuticals dissolved throughout the Hudson River. They say that in some places, levels may be high enough to potentially affect aquatic life.

Pharmaceuticals in the Water Supply: Is this a threat?

According to the GAO, a “study focused on untreated source water used by public drinking water systems” found that 53 of 74 sites tested had at least one pharmaceutical present, and in 2010 the EPA showed that 54 active pharmaceutical ingredients and 10 metabolites, the product of biological changes to a chemical, had been found in treated drinking water.

The outlook for global water is bleak, but Alex Prud’Homme still believes in the power of human ingenuity.

Drugs in Our Drinking Water: An Update

The 2008 Associated Press report that drugs had been found in the drinking water supplies of 41 million Americans was alarming. What is the state of pharmaceuticals in our water today?