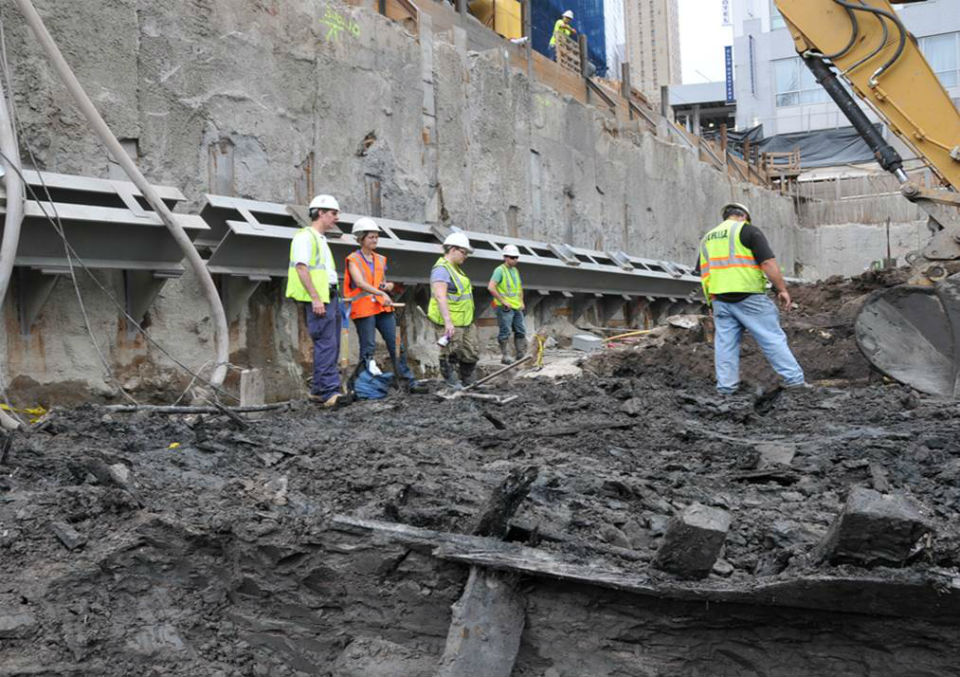 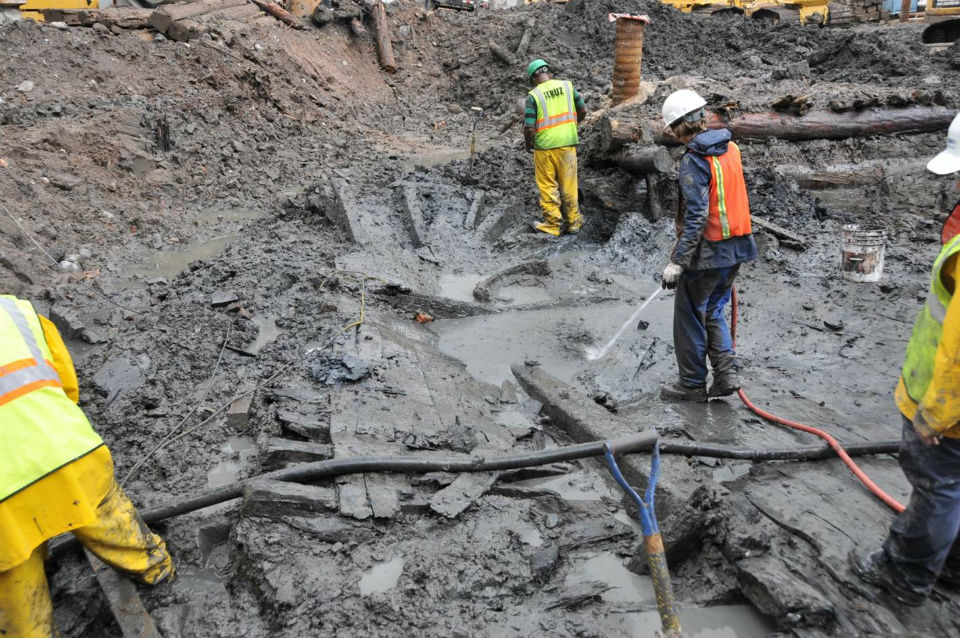 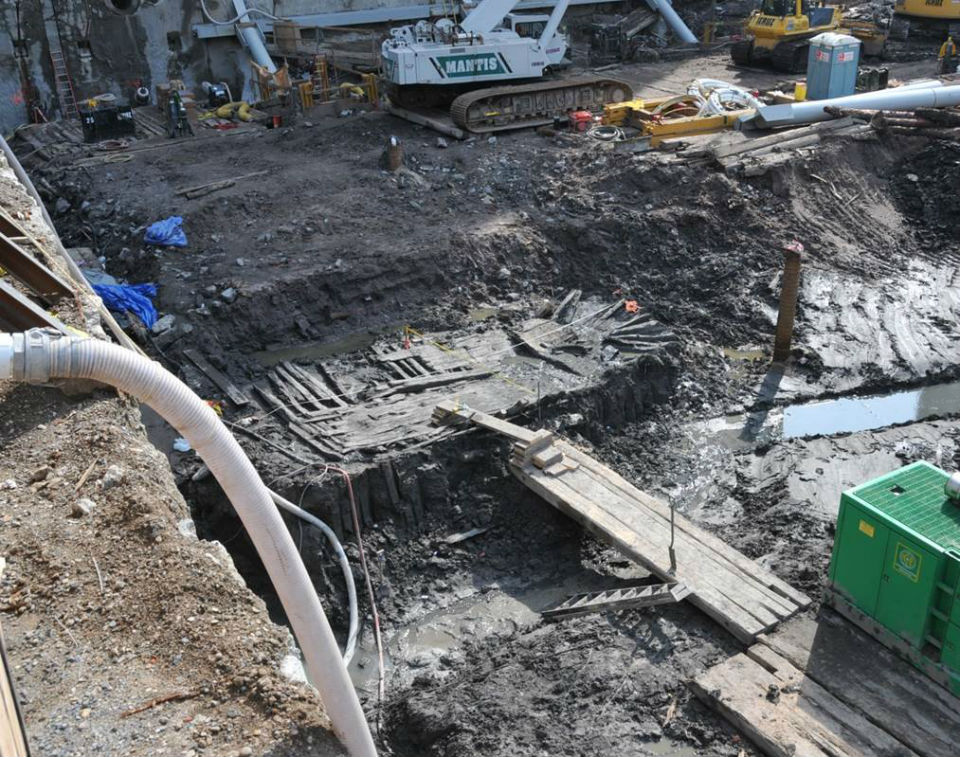 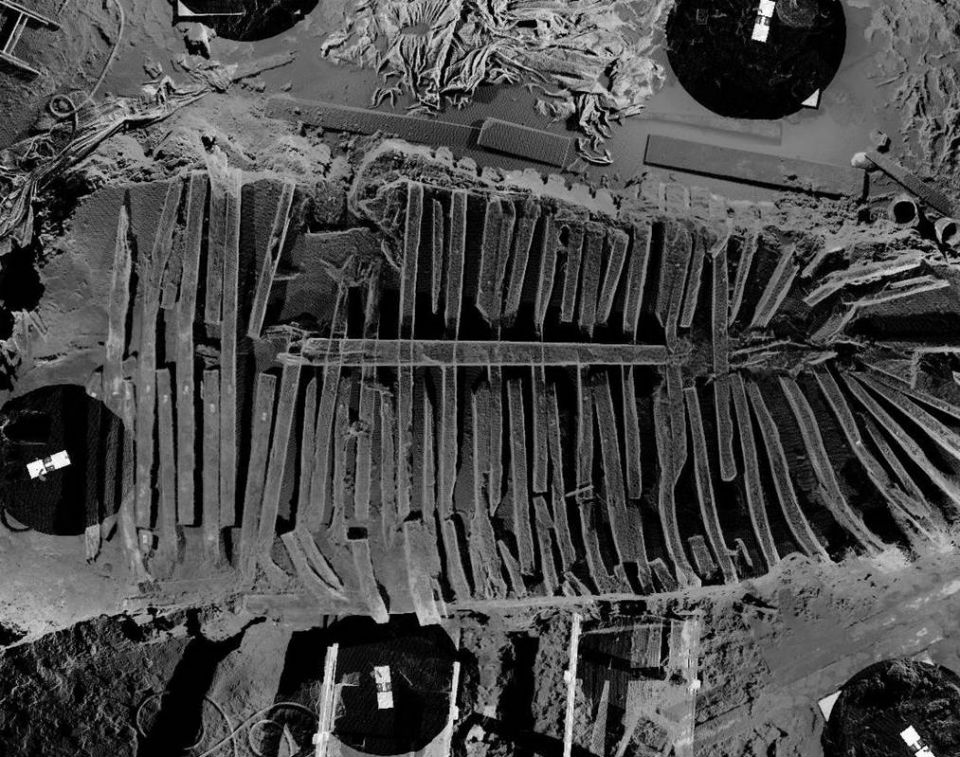 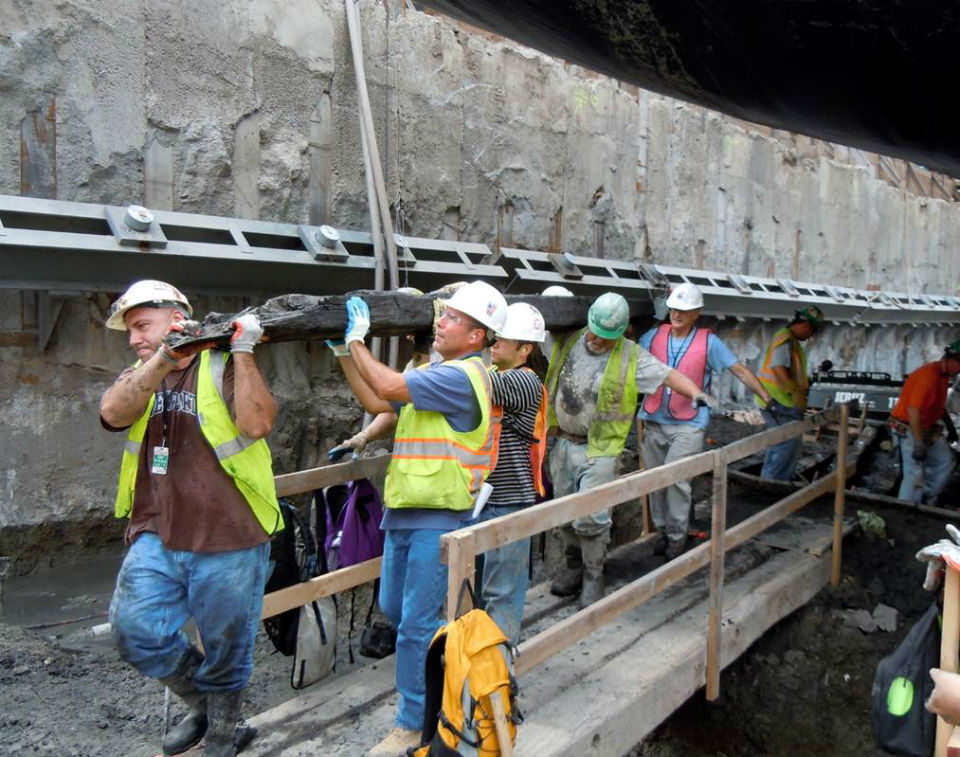 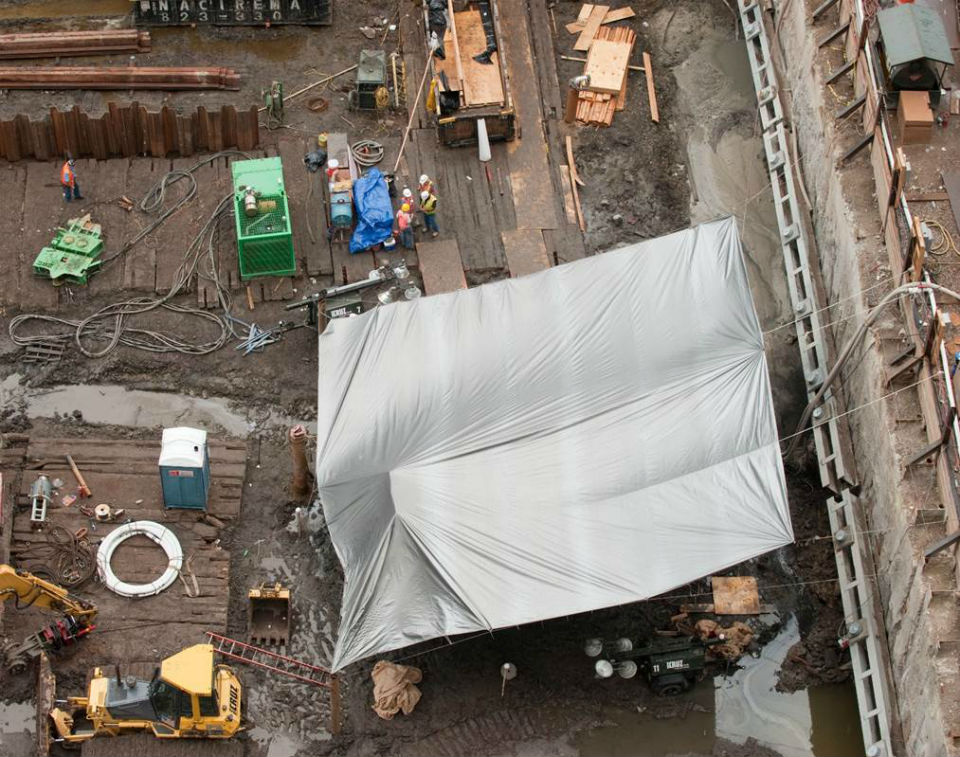 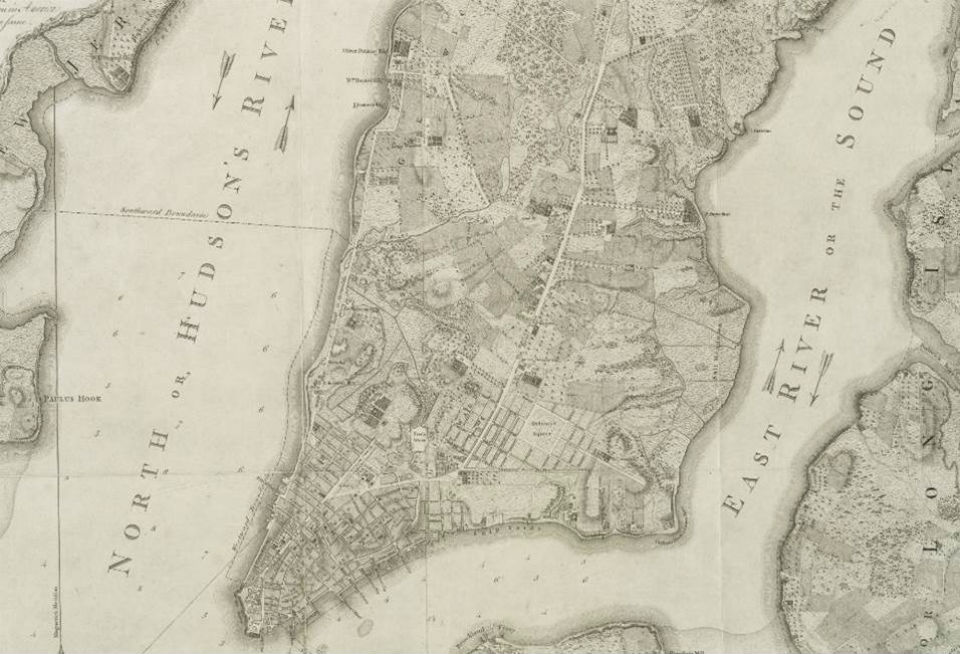 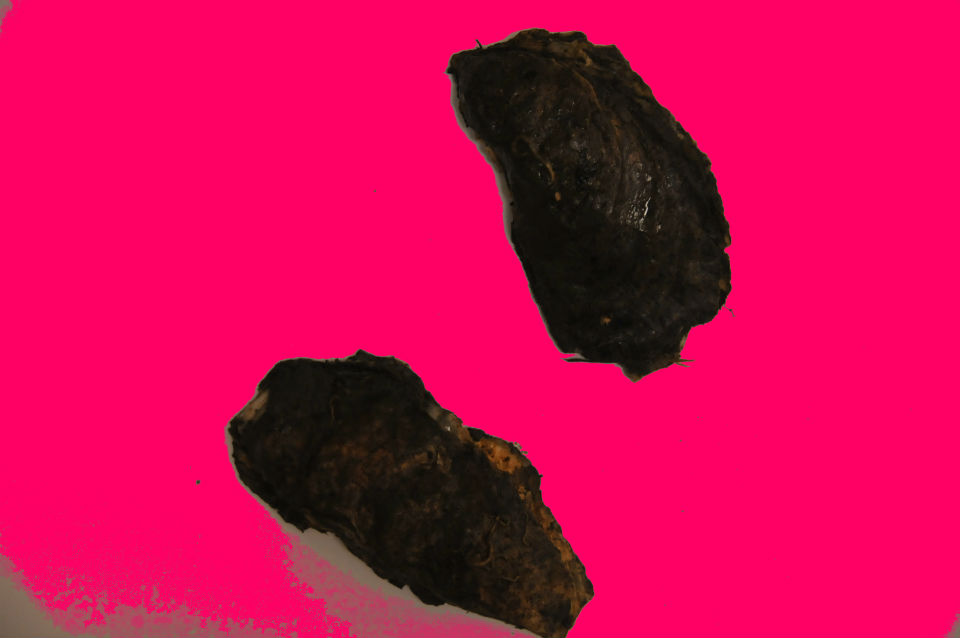 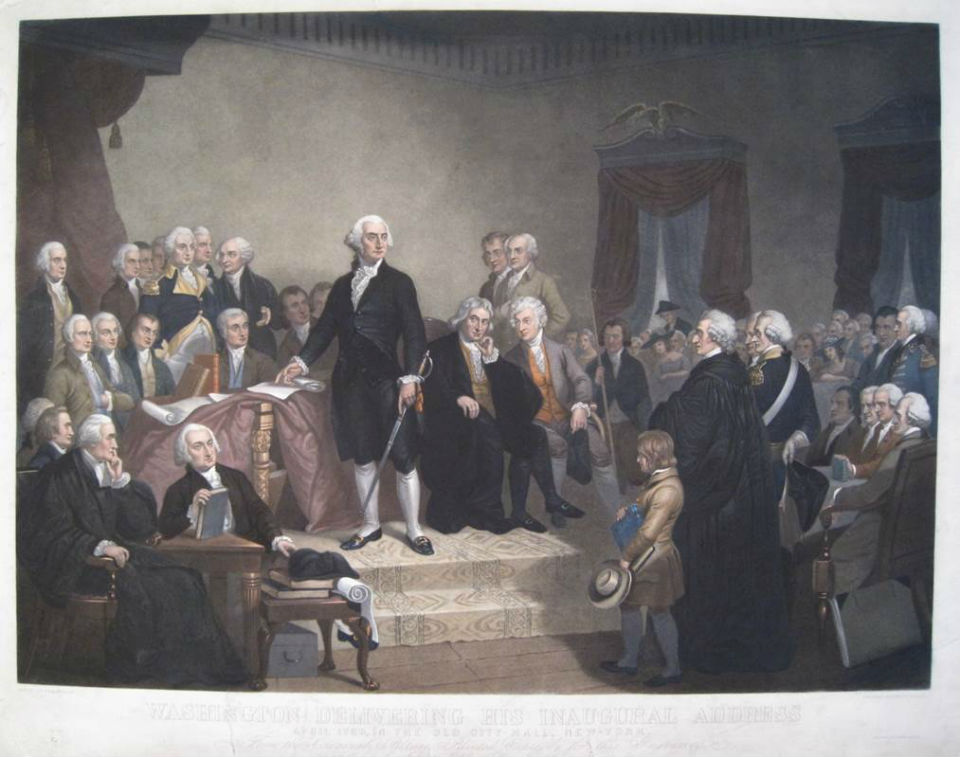 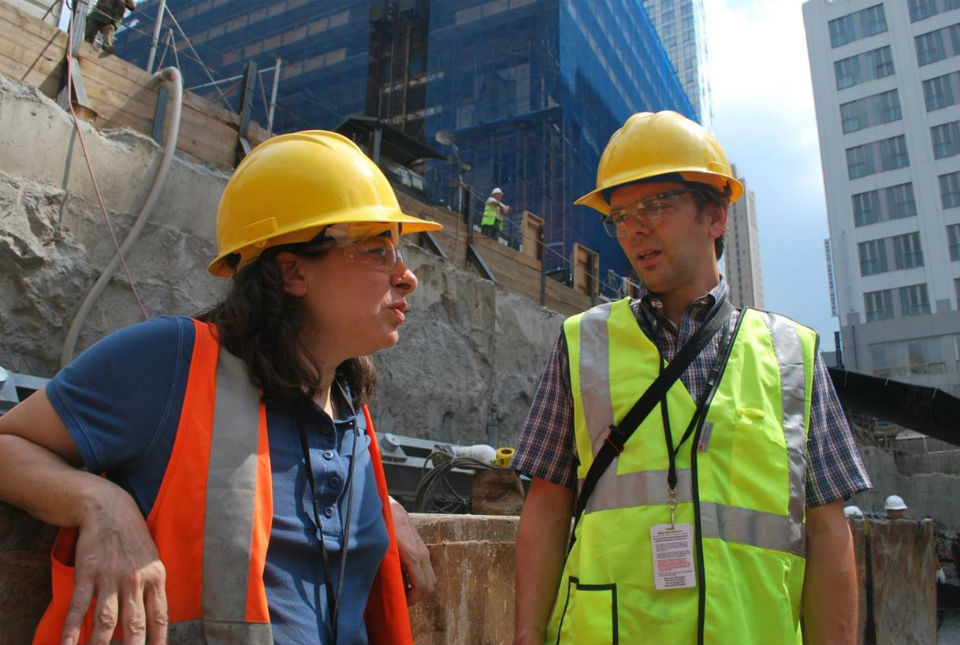 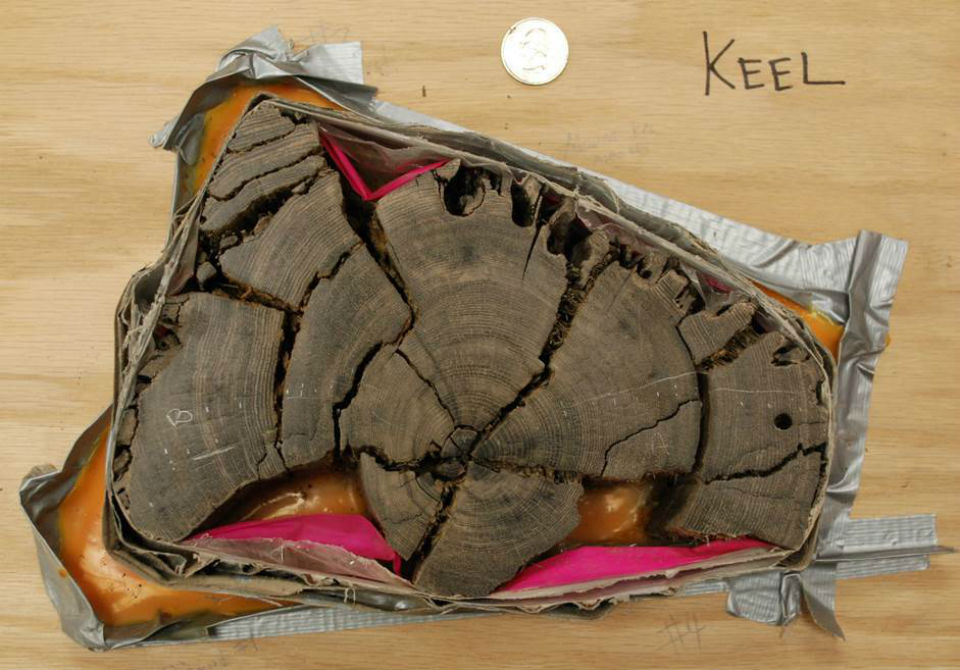 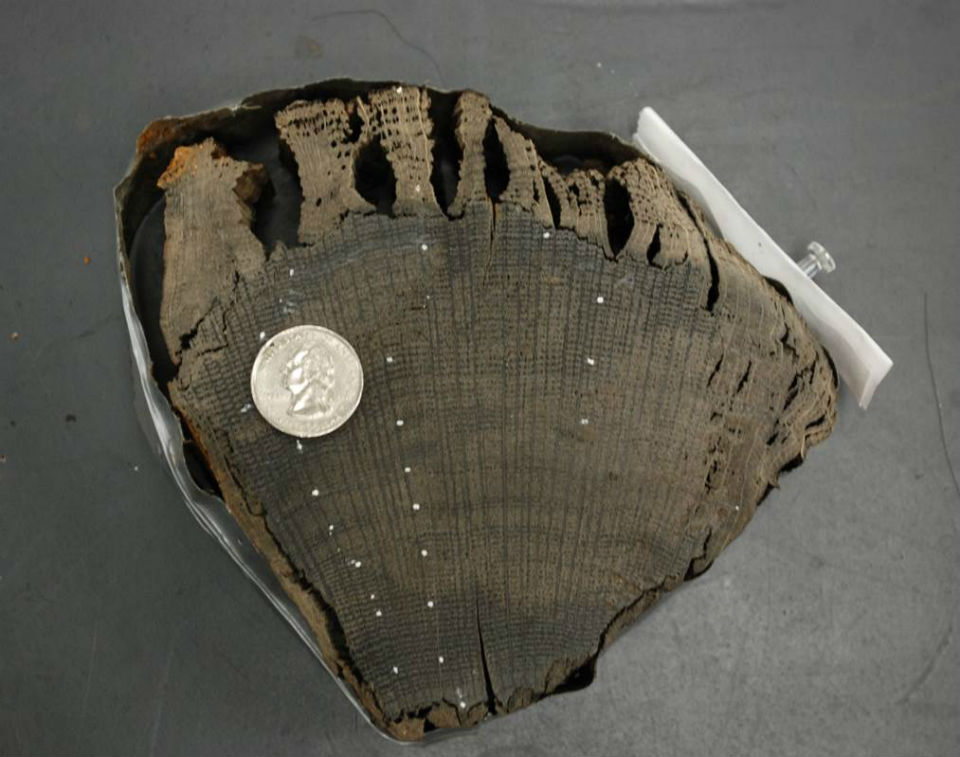 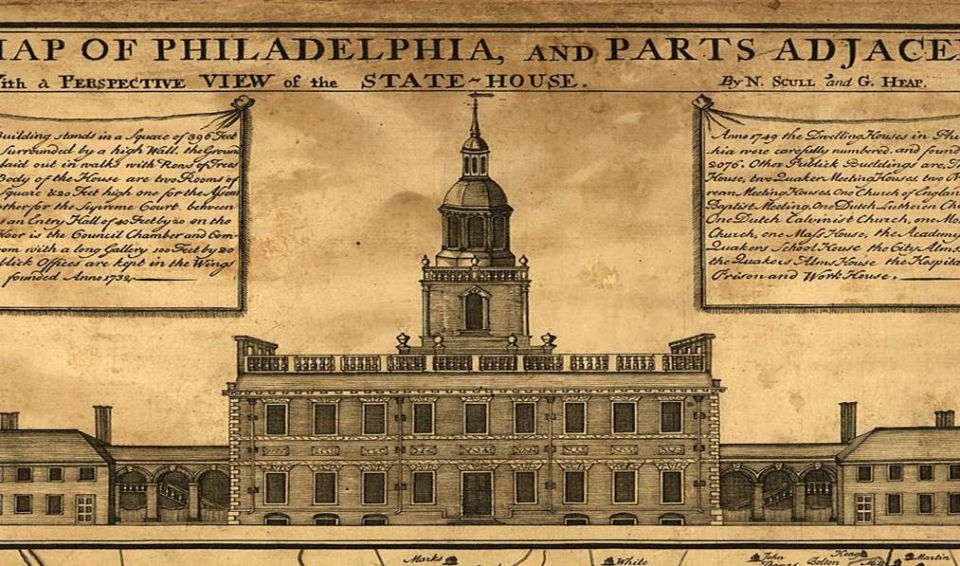 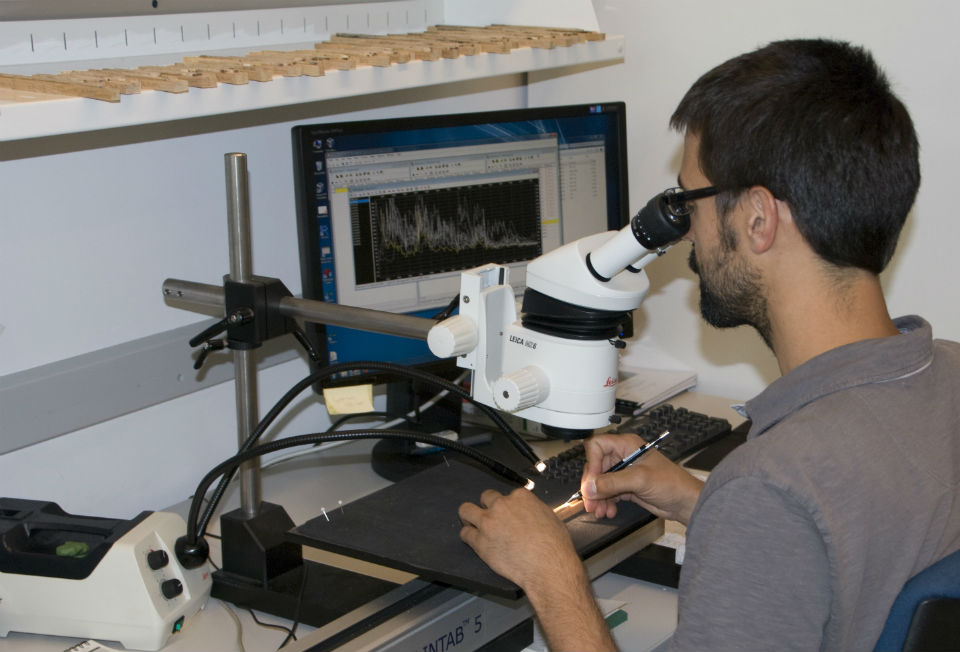 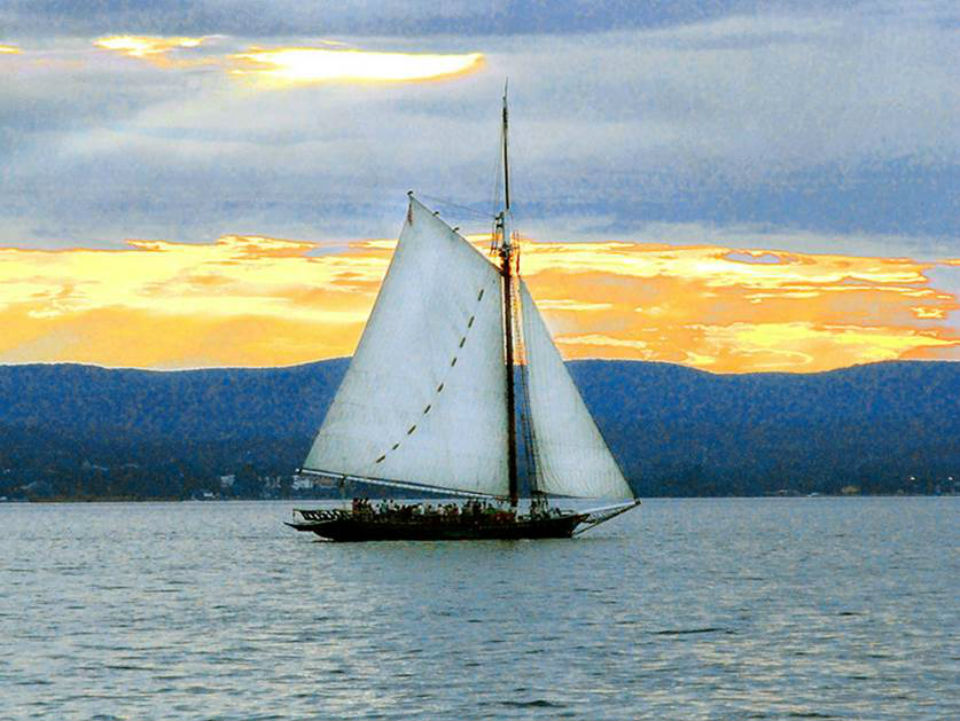 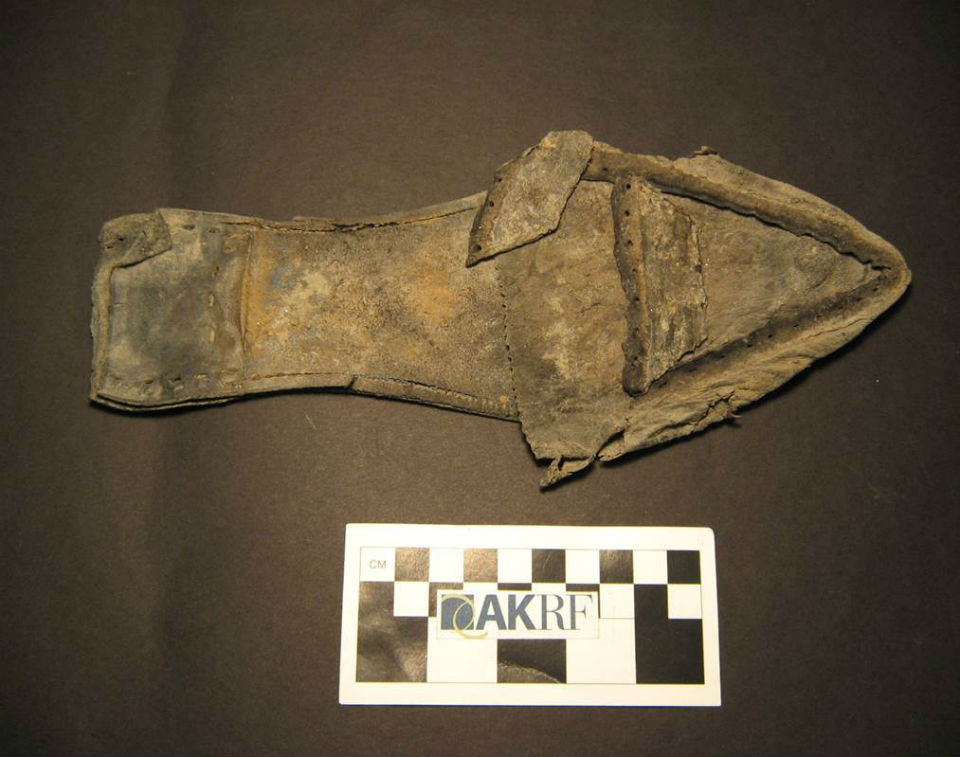 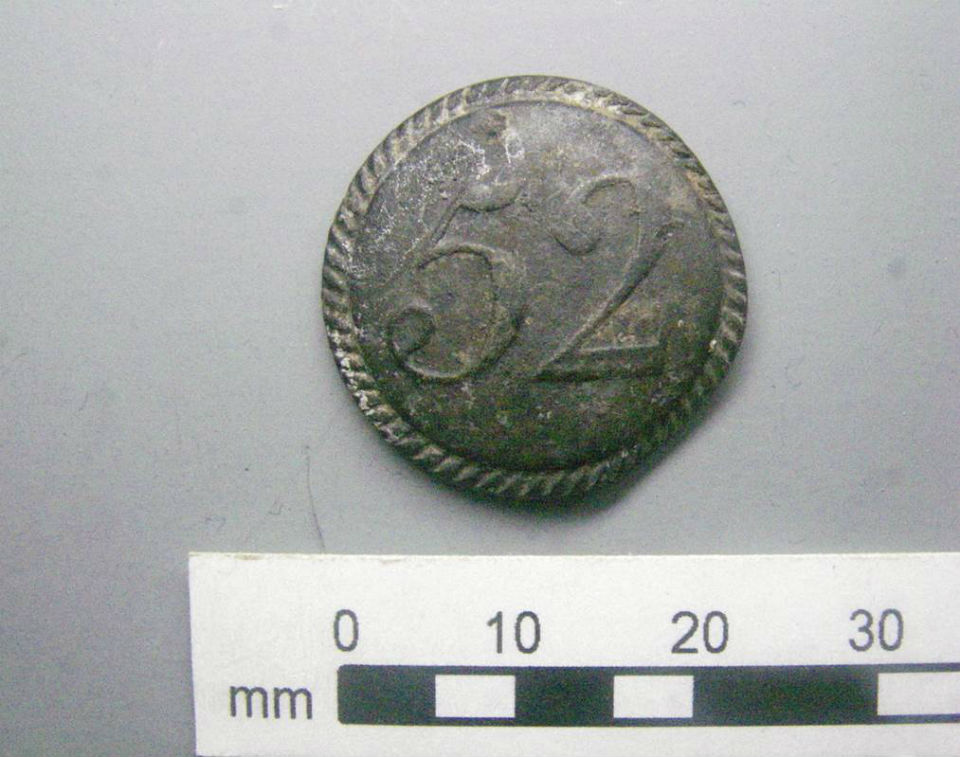 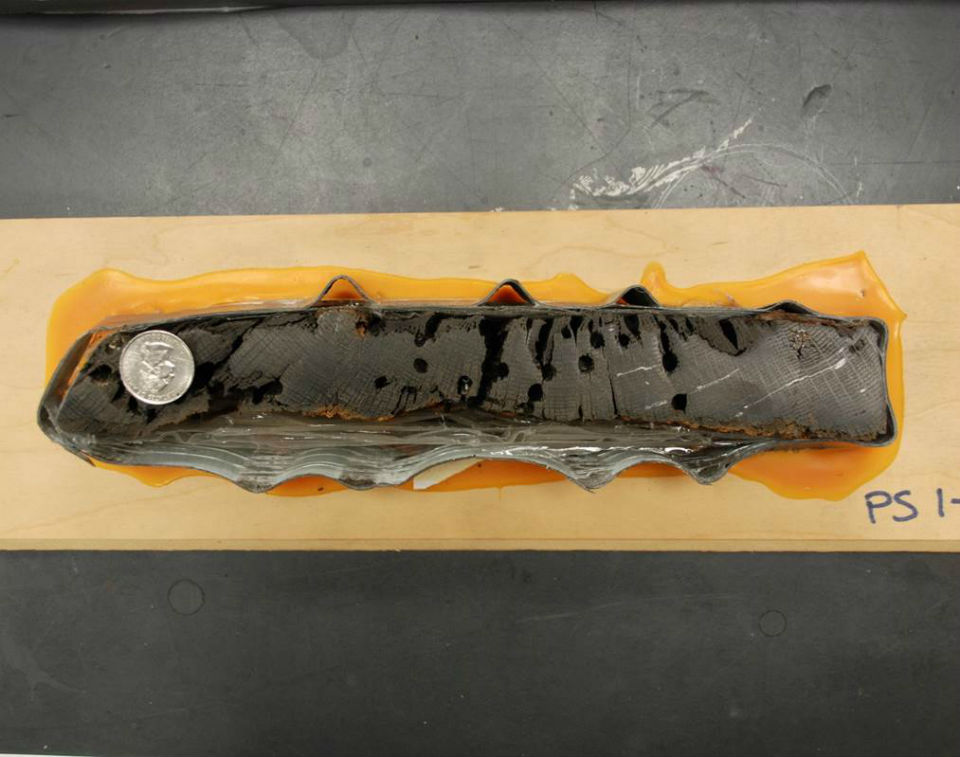 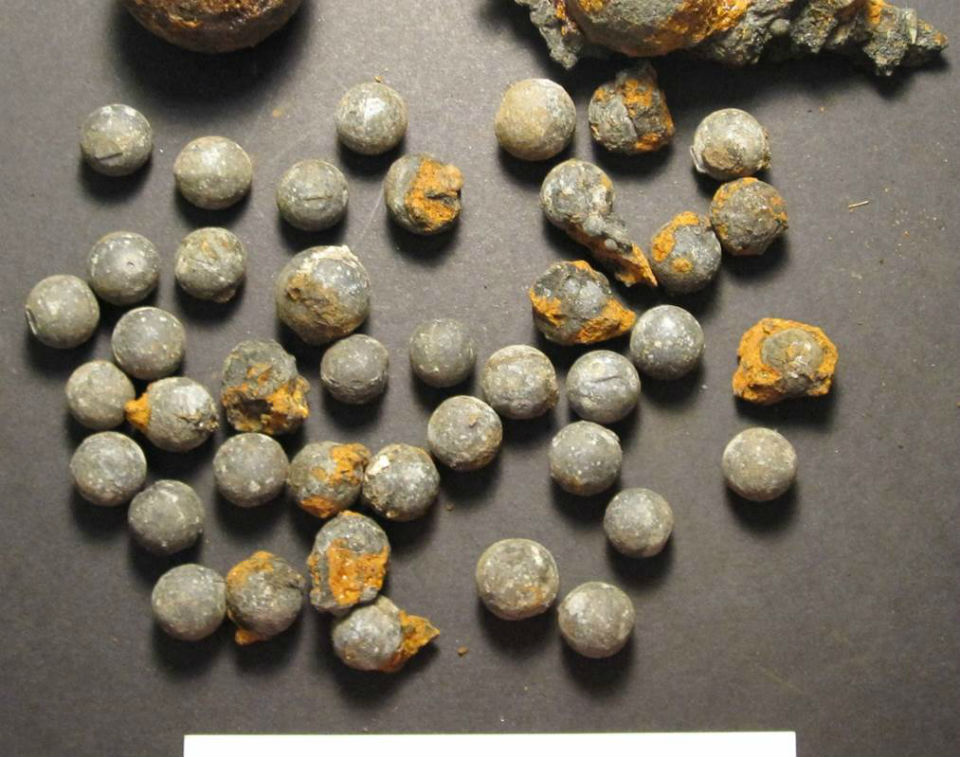 <
►
>
Archeologists think the ship sailed to its final resting spot a block west of Greenwich Street in the 1790s. At the time this 1776 map was drawn, Manhattan’s western shore stopped at Greenwich Street. As New York prospered following the Revolutionary War, the waterfront inched westward as demand for boat slips and land grew. Over the next two centuries, the shoreline would creep west by another tenth of a mile. (New York Public Library)

Four years ago this month, archeologists monitoring the excavation of the former World Trade Center site uncovered a ghostly surprise: the bones of an ancient sailing ship. Tree-ring scientists at Columbia University’s Lamont-Doherty Earth Observatory were among those asked to analyze its remains for clues about its age and origins. In a study now out in the journal Tree Ring Research, the scientists say that an old growth forest in the Philadelphia area supplied the white oak used in the ship’s frame, and that the trees were probably cut in 1773 or so—a few years before the bloody war that established America’s independence from Britain.

Key to the analysis was wood sampled from Philadelphia’s Independence Hall two decades earlier by Lamont tree-ring scientist Ed Cook. It turns out that growth rings still visible in the building’s timbers matched those from the World Trade Center ship, suggesting that the wood used in both structures came from the same region. As trees grow, they record the climate in which they lived, putting on tighter rings in dry years and wider rings in wet years. In the process, a record of the region’s climate is created, allowing scientists to see how Philadelphia’s climate differed hundreds of years ago from say, New York’s Hudson Valley. The climate fingerprint also serves as a kind of birth certificate, telling scientists where pieces of wood originated.

The ship itself has been tentatively identified as a Hudson River Sloop, designed by the Dutch to carry passengers and cargo over shallow, rocky water. It was likely built in Philadelphia, a center for ship-building in Colonial times. After 20 to 30 years of service, it is thought to have sailed to its final resting place in lower Manhattan, a block west of Greenwich Street. As trade in New York harbor and the young country flourished, Manhattan’s western shoreline inched westward until the ship was eventually buried by trash and other landfill. By 1818, the ship would have vanished from view completely until the terrorist attacks on Sept. 11, 2001 set in motion the events leading to the World Trade Center’s excavation and rebirth. The ship’s removal from Ground Zero and the analysis of its timbers and some of the artifacts uncovered are described in the photo essay above.