Video caption: A team from the Center for Sustainable Development and Lamont-Doherty Earth Observatory engaged social science students, especially women, to test for high fluoride levels in their own villages in India.

In the hilly part of Central India, the Alirajpur and Jhabua districts in Madhya Pradesh are known for the high fluoride levels in their underground water. The government has done a great job of drilling and providing handpumps in most locations. However, many of the handpumped wells have high levels of fluoride in their water. Long-term ingestion of large amounts of fluoride can lead to dental and skeletal fluorosis. Symptoms include staining and pitting of the teeth, joint problems, and abdominal pain and vomiting.

Tackling this issue will involve both science and social science. That’s why, working with the district collector of Alirajpur, Surabhi Gupta, a team of scientists from Columbia University’s Lamont-Doherty Earth Observatory and social science experts from the Center of Sustainable Development decided to pursue this problem.

During a visit to India during September, we set out to answer three questions. Our main research question was to understand the magnitude of the fluoride problem in the villages, backed by real data. Second, we wanted to know whether people are aware of fluorosis, and able to connect water to the symptoms of fluorosis? Finally, what are some of the best ways to make people aware of the problem and change their behavior?

After meeting with the Rural Development Department of the District Magistrate’s office and Public Health and Engineering Department officials, the Center for Sustainable Development experts suggested that they could field-test various options, but would need local “fluoride warriors” to join hands. District Collector Gupta advised that social work students from Alirajpur Post Graduate College would benefit from this field-work as a part of their mandatory internship. The question now was: Would social science students be interested in learning science to test the fluoride in water?

A social work student coloring the handpump blue to denote that the pump has safe limits of fluoride. Photo: Pooja Iyengar

The first week of September was a test week for many of us. Sixty Masters in Social Work (MSW) students sat in a large room ready to learn about the dangers of having too much fluoride in their drinking water. None of them had heard of fluorosis. However, many had seen browning of teeth, especially of children in their villages. Some believed that the browning was caused by intake of tobacco, while others thought that it was caused by irregular brushing of their teeth. As a part of the workshop, the students went through fluorosis “facts” versus “fiction.” Columbia researchers asked them if they were interested in knowing whether the water in their village handpumps had permissible levels of fluoride or not? Everyone said yes!

We began by testing the water fountain in the classroom. Everyone was anxious to see the result, and relieved to see the solution turn pink, which meant the water was safe. But what about water in their own villages?

We spent the next two days on field-visits. We gathered and tested samples, and painted the handpumps — blue if safe, yellow if unsafe. To communicate the good and the bad news, we used street plays in the local language, and sent mobile loud speakers roaming through the busy markets of Alirajpur. We also created short visuals about the testing methodology. The class was 60 percent female and 40 percent male. Both men and women were quick to grasp the testing technique. But one thing that we noticed was that women spoke very little in class and asked almost no questions. It was very difficult to figure out whether they understood the procedure. Fieldwork in a nearby village showed that the women had no problems in testing as instructed. They also very confidently explained the problem to the large crowd that would gather after seeing the buzz near the handpumps. For many women, this was the first time that they did any kind of public speaking.

Not only did the students have to test the fluoride levels, they also needed to use smart phones to upload the data. Using online surveys, uploading data, and recording GPS were skills that were new to everyone. Two students, Pinky and Devendra, became defacto leaders who problem-solved with other teams. MSW students were given the responsibility to find out whether the water that everyone was drinking in their village had high fluoride content. Therefore, a huge responsibility rested on their shoulders. Armed with the new knowledge about the testing, they now hold a special place in the community. External people, including the government department and Columbia University experts, could help with the technical skills, but convincing the community needs to be done by people they see every day, people who are their own.

Fluoride testing is particularly useful since the instant color change provides a very visible sign to the community about whether the water is safe or not. The students also created a map that they could all see and share, which was very different from how data is typically handled in India. Making data visible and not exclusively meant for the District Magistrate or the Sarpanch (village head) is a new culture in India. Data usually ends up on a government officer’s desk in the form of a report or is posted online but protected by passwords.

College student involvement, street theatre in local language, posters, fluoride testing, and digital data could be elements that could be used to create modular training sessions. These sessions could be used as internships and field-work in areas that have high fluoride. We’re still reviewing our methodology, but it holds the promise of training large numbers of college students to become science detectives for a greater common good.

The authors would like to thank INREM Foundation and Pratham Education Initiative for their insights and valuable suggestions to make the first training on fluoride possible with the MSW students in Alirajpur Post Graduate College.  A big thank you for the MSW students and faculty for their overwhelming interest. The authors also thank Pooja Iyengar from Mahashakti Seva Kendra, Bhopal for creating all the visuals used as a part of the training. Without local collaboration, no training can be effective. 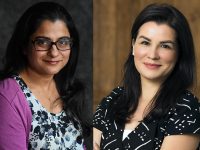 A big thank you to Radhika Iyengar, Lex van Geen, Charlotte Munson and each and every one of MSW team. You all have done a very good future work for the villagers who are in fluorosis affected area.
Thank you and congratulations once again.