The planet is losing its glaciers at a staggering rate, and the slew of large-scale environmental issues left in the wake of melting glaciers are well documented: carbon is released from thawing ground, river temperatures increase, ecosystems are shifted and the planet’s albedo is lowered. Now, new research is highlighting some of the changes that are too small to be seen with the naked eye. A March 2021  paper in the journal Nature has illuminated the way that glacier melt is impacting the microbes that play a key part in the Earth’s carbon cycle. 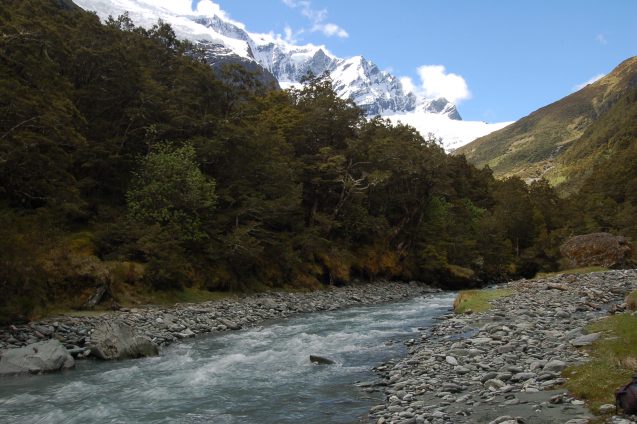 The glacier-fed Rob Roy River in New Zealand is one of the sites where fungal decomposition rates were measured. Courtesy of Lee Brown/ University of Leeds.

The global carbon cycle is the process through which carbon is exchanged from the atmosphere, to the Earth’s land and oceans, and then back into the atmosphere. On land, trees and other plants consume and retain large amounts of carbon dioxide, while animals and many human processes release it. In oceans, rivers, and lakes a similar process occurs, fueled by aquatic plants and algae. Beyond humans and plants there are two other kingdoms that play a key role in the carbon cycle that are often overlooked.

Microbes—specifically microscopic bacteria and fungi—perform the important function of breaking down dead organic material. On land, microbial decomposition is the process that forms soil as fallen plant matter is broken down by these tiny organisms. The process doesn’t only occur on dry land, though. Microbes also break down organic material in rivers.

Grasses that grow near rivers’ edges, along with leaf litter, algae, and wind-blown plant matter, make their way into rivers and are readily decomposed by microbes. As these microbes, known as “decomposers,” break down organic matter, they release the carbon that is sequestered in the plants. On land, the amount of carbon dioxide released through these processes is so significant that forests sometimes become carbon sources, rather than carbon sinks. 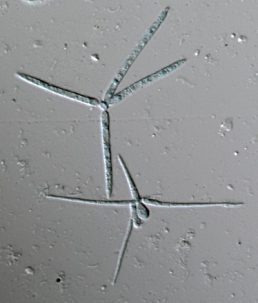 For many decades, the rate of decomposition by fungi in the cool waters of high-mountain, glacier-fed rivers has remained steady. But as glaciers recede, river temperatures are rising. Decomposers thrive in warm conditions, and as temperatures increase, so does their productivity; the researchers from University of Leeds have shown that in these rivers the microbes, in particular the aquatic fungi, are decomposing organic matter faster than ever.

The authors of the paper wanted to measure how quickly cellulose, which makes up plant cell walls and is a key component of organic matter, was being decomposed in glacier-fed rivers. They found a suitable proxy by submerging pieces of artist’s canvas into river water. In rivers with less glacier cover, the strips of cotton decomposed more quickly, and the researchers measured a marked increase in the abundance of the fungal gene that produces an enzyme that breaks down cellulose, the Cellobiohydrolase I Gene. 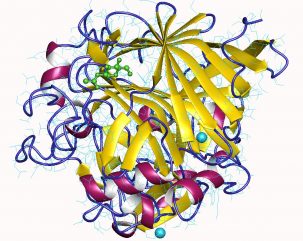 An artist’s rendering of the gene that drives fungal decomposition. Source: Wikimedia Commons

This finding was replicated at six different study sites in Europe, North and South America, and New Zealand. “Our results were globally consistent across mountain rivers of six countries on four continents,” said Fell. Some of the highest decomposition rates were found in rivers of the Alaska Boundary Range, Austrian Alps, and Antisana region of Ecuador. 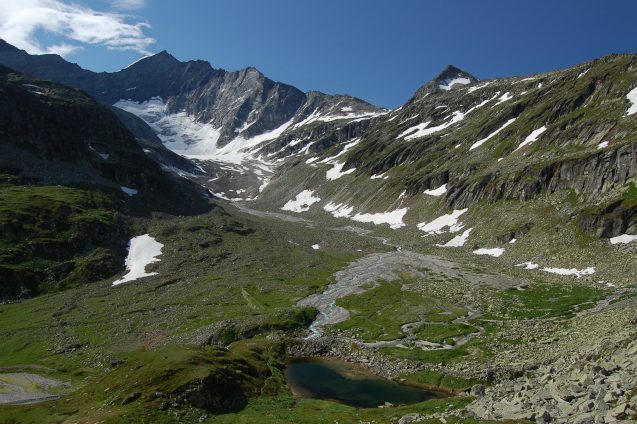 The sample site at Odenwinkelkees, in the Austrian Alps. (Courtesy Lee Brown/ University of Leeds.)

Fungi reproduce differently than animals and most plants. The most common form of fungal reproduction is by sporulation, through which fungi produce both sexual and asexual spores. These spores contain the fungi’s DNA, and new fungi grow from the spores once they land in an environment suitable for growth. Many fungi, including many aquatic fungi, increase their sporulation rates at warmer temperatures, which may account for the increasing abundance of fungi in warmer rivers.

The higher decomposition rates may alter the carbon balance of the planet, if it continues to happen on a large scale, and they will also likely alter river ecosystems. As decomposers break down organic matter, they free nutrients that are released as a byproduct of the process, making the plant debris into an easy food source for small organisms. “The released nutrients contribute to stream food webs and lead to the production of further microbial biomass and enhanced palatability of leaf material for invertebrates,” said Fell. The ramifications of a sudden change to food webs could be felt all the way up the food chain, and could promote ecological changes that may further interrupt the delicate carbon balance.

As global temperatures rise, big events draw many eyes: animals going extinct, forest fires burning, and massive flooding are hard to miss. But, in order to fully evaluate our precarious climate situation it is important to turn our gaze to the microscopic as well.