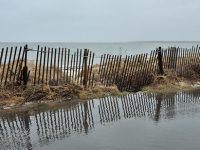 How to Prevent a Flood Disaster: Using Law and Policy to Systematically Reduce Risk 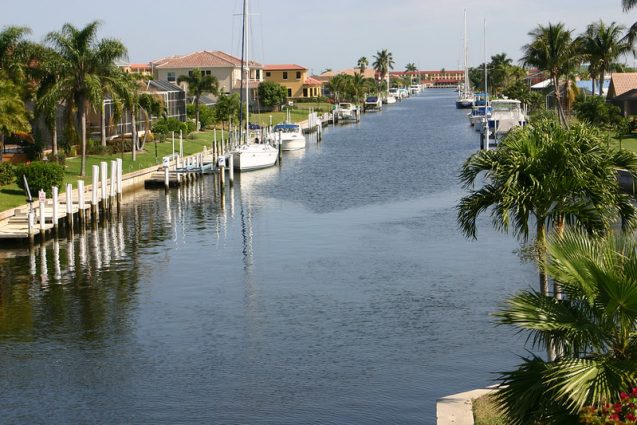 This past June, I had the privilege of attending an eye-opening panel on coastal adaptation during the “At What Point Managed Retreat? Resilience, Relocation, and Climate Justice” conference hosted by the Climate School’s Earth Institute. The discussion, “From Planning to Implementation: Legal and Policy Perspectives on Managed Retreat,” outlined an approach, from high-level policy to local execution, to plan for sea level rise (SLR) and managed retreat within the existing legal framework. The presenting practitioners and legal experts taught me an abundance of tangible approaches for protection and relocation from flooding, and I hope to share them with anyone thinking about the long term safety of coastal communities.

“The question,” As J. Peter Byrne, of the Georgetown University Law Center, framed it, “is whether retreat will occur suddenly, chaotically, and disastrously, or whether communities can develop legal tools to render that retreat relatively safe, efficient, and ecologically acceptable.” Discussing how to implement systems to achieve the latter became the guiding light for the conversation. Inevitably, the group conceded, some retreat from at-risk coastal land will need to occur (this was, after all, a conference on managed retreat). But in the meantime, their expertise addressed the matter of preparing our legal system, communities, buildings, and infrastructure to ensure optimal outcomes as sea levels rise. But what legal tools can create safety amidst wildfires and floods, efficiency in the face of unprecedented loss of value, and ecological acceptability as seas rise into the built environment? To answer this question, we turn to two practitioners on opposite sides of the country: Mitchell Austin of Punta Gorda, Florida, and Ashley Reineman of the California Coastal Commission.

Austin, the Principal Planner for his city, half-smiled as he spoke proudly of Punta Gorda’s ahead-of-the-curve adaptation planning. Although most of the city resides within hurricane evacuation zone A—the first zone to clear out when evacuation is necessary—there are a number of steps that Punta Gorda has taken to position itself favorably for mitigating the damages of sea level rise. After a 2004 hurricane caused major damage throughout Punta Gorda, city planners worked with University of Florida Law Clinic students to incorporate an SLR policy into their comprehensive plan, a high-level land use document that carried legal weight. The plan consists of an objective, a policy, and a measurement component, all of which are critical in providing a clear framework for assessing and reducing risk.

Much of the panel’s presentations and discussions focused on what I call the three M’s of risk: measuring, modelling, and mitigation. Risk, mathematically, is the probability that an event will occur, times the magnitude of the damage that the event would cause (Building a $1000 lifeguard tower that would have a 10 percent chance of being destroyed by a storm surge would carry a risk of $100). By first modelling and measuring risk for a city, as outlined in Punta Gorda’s comprehensive plan, planners such as Austin can take action to mitigate that risk. They can do this by reducing the likelihood that a flood could reach certain areas, for example, and/or the damage that would occur if it did. Punta Gorda addressed the former by acquiring as much vulnerable, coastal land as possible and building living shorelines out of oyster reefs to prevent surging floods. They tackled the latter by upgrading stormwater management systems at five major drainage basins throughout the city. 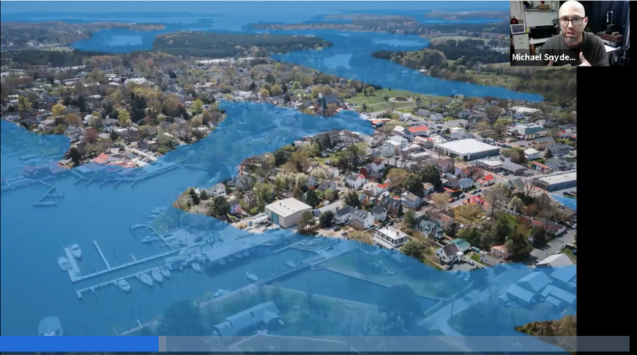 By the end of the century, 13 million Americans could be displaced by sea level rise. During the Managed Retreat conference recently hosted by the Columbia Climate School, photographer Michael Snyder shared this image showing what the Chesapeake Bay area would look like with six feet of sea level rise.

Punta Gorda officials performed these assessments and strategies as part of a citywide adaptation plan in 2009. While not having the legal power of the comprehensive plan, this adaptation document bridged the gap between the law and local implementation. The strategy, then, is to rinse (hopefully not with flood water) and repeat. By constantly modelling and measuring risk from SLR and flooding, and then planning and adapting to reduce overall risk, Punta Gorda has incrementally improved its resilience, while keeping its community intact. This strategy is aided by the city’s stellar planning since the 1990s in acquiring much of the shorefront as public land and converting it into parks and preservation areas, parcel by parcel, which also helps reduce the loss of value that occurs as waters rise.

But how can communities take shoreline action when most waterfronts are much more privatized than Punta Gorda’s? In many states, Byrne explained, land seaward of the mean high tide line (MHTL), the average point that the tide rises to, is publicly owned. Due to a legal principle called the accretion and avulsion rule, there is a strong argument that land becomes converted from private to public as this line moves inland due to SLR and therefore could be seized and used for the public interest. Thus, Byrne asserted, “the public as a whole, represented by government, has a significant interest in the intertidal area right now, and is going to own more of the beach going forward.” Private property owners and conservative judges have sought to limit the use of this rule through a variety of methods, but the high percentage of Punta Gorda’s shoreline as government-owned preservation land has left the coast much more resilient to storms than the largely private shoreline developments across Charlotte harbor.

Instead of seizing land with this rule, however, Byrne recommended a number of strategies to work with developers and private property owners to plan thoughtfully together for SLR. He suggested placing conditions in current permits that require structures to be moved, altered, or removed once sea levels met a certain physical threshold. This would help give developers the space and time to plan for rising seas while reducing subjectivity and being legally explicit. Additionally, to prevent landowners from trying to stop the MHTL from rising and converting land from private to public, Byrne advocated for the use of the accretion and avulsion rule to prevent shoreline armoring, which also causes beach erosion.

This battle over sea walls has been a major issue lately in California, where Ashley Reineman works as a climate change specialist for the California Coastal Commission (CCC). Her work for the CCC echoes a similar strategy to Austin’s in working down the legislative ladder to implement smart coastal policy at scale. But whereas Austin is a local practitioner, Reineman brings the perspective of a high-level policymaker. She explained that although the CCC is the main issuer of Coastal Development Permits, the commission can also transfer permit authority down to cities and counties through Local Coastal Programs (LCPs). Similarly to Punta Gorda, the CCC partners with universities, but it also works with ports and all levels of government for development, public works, and port master plans. The California Coastal Act (1976) governs issuance of permits and approval of LCPs, and—in line with the three M’s—seeks to minimize risk in new developments and maximize the creation of shoreline protection. In order to achieve these results, the CCC has issued high-level policy guidance on how communities can analyze risk and prepare for sea level rise, which Reineman reported “provides probabilistic projections associated with both low and high emissions scenarios from 2030 to 2100 and beyond.” This guidance helps communities understand how to assess risk and the legal options they have for addressing this risk within the context of the Coastal Act and its mandate to protect coastal ecology, access, and other resources.

Through the adoption of LCPs, coastal communities then translate long-term goals into science-based local adaptation strategies, including specific LCP policies that govern how and whether new development is approved, and how risks to existing development are addressed. These strategies include a number of Byrne’s suggestions, like waiving the rights to future shoreline armoring, and imposing legal triggers for additional requirements as waters rise, such as requiring eventual removal or adaptation of new development. This legal language, written into approved permits, seeks to educate developers and landowners, not fight them, Reineman pointed out.

Ultimately, relocation is sticky, and retreat is difficult to achieve all at once. However, by focusing on continuous, planned, and incremental retreat that is well embedded in policy and law, many communities can achieve markedly better outcomes. Byrne listed numerous potential areas where these strategies can prevent the sudden chaos and disaster of unmanaged retreat, from emergencies, expensive disaster relief, and flood insurance, to mortgage financing and declining property values and tax revenue. These are real issues where proper planning can make major differences in people’s lives. By focusing on risk as a metric and seeking to reduce it, bit by bit, from plan to practice, from Florida to California, we can retreat the right way.

As a final note, Katie Spidalieri of the Georgetown Climate Center, who wonderfully moderated the panel, put together this Managed Retreat Toolkit to help every community navigate from proposals to execution. Be sure to check it out to see what you can do to help reduce risk and make your hometown more resilient! 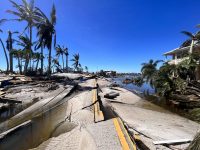 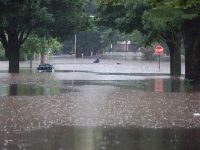 Multiform Floods: A Growing Climate Threat
Subscribe
Login
0 Comments
Inline Feedbacks
View all comments
wpDiscuz
0
0
Would love your thoughts, please comment.x
()
x
| Reply
This website uses cookies as well as similar tools and technologies to understand visitors' experiences. By continuing to use this website, you consent to Columbia University's usage of cookies and similar technologies, in accordance with the Columbia University Website Cookie Notice.Close