Cooperatively, the dancers put together an ambitious, concert-length program in just under two weeks. 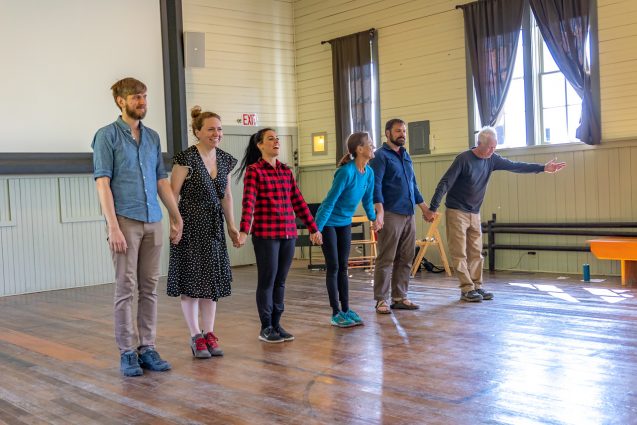 Fisher choreographed and performed a solo called “Melt Down” inspired by the glacier outside the door of the Rec Hall and accompanied by bassist Ernie Provencher (Fisher’s spouse). “I hiked on the Root and Kennicott Glaciers,” Fisher said, “and marveled at the speed and quantity of glacial movement, how magnificent the glaciers are, and the meeting of force and fragility.” Encountering the ancient ice’s shape and texture gave Fisher a sense of glacial power, but also a sense of its intricate delicacy.

Williamson choreographed and performed a solo called “Hancock Jig.” With music composed and performed by New York-based musicians Caitlin Warbelow and Chris Ranney, Williamson created a hybrid of Irish step dancing and modern dance to represent the mechanical power of the Hancock Jig machine on display in the old Kennecott Mill building. Together, these solo pieces by Williamson and Fisher placed two major elements of the Wrangells—human and geologic—into visual conversation.

That conversation was crystallized in the dancers’ duet, “Ablation Zone,” a piece accompanied by Provencher improvising a jazz-based soundscape on electric bass. “Ablation Zone” borrowed both its title and themes from a poem in local McCarthy poet Jeremy Pataky’s collection, Overwinter (University of Alaska Press, 2015). Fisher said they “jumped into Jeremy’s poem, trying to capture mood in movement.” They choreographed their way through the poem idea by idea. 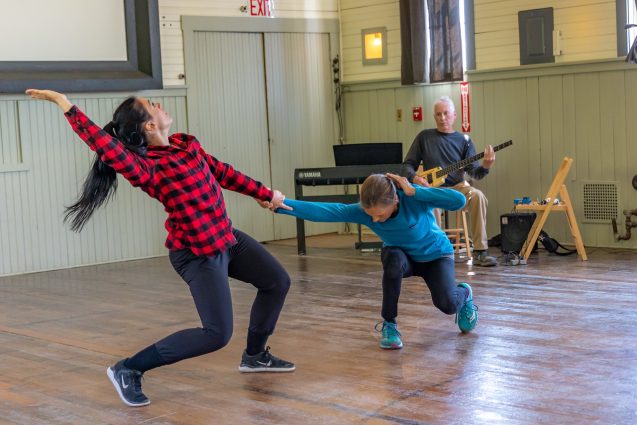 “When he mentions the auroras,” said Fisher, “we sit quietly and move our gaze in an arc from one side of the hall to the other as if marveling at the northern lights. When he mentions succession, we tried to hint at that by creating tree shapes that change as we moved upstage to downstage.”

Pataky’s poem addresses a glacier’s ablation zone directly with the second-person pronoun “you.” “You fluctuate snowlines,” Pataky writes, “each morning migrating over / ridgelines on a tectonic plate / that moves as fast as / fingernails grow.” From macro to micro, tectonic to fingernail, the poem opens by marrying earth and body. It creates a corporeal point of entry to earth processes, particularly ablation.

Ablation in general is a process of removal or destruction. In glaciology specifically, a glacier’s ablation zone is its area undergoing a reduction in ice mass. Technical reasons for ice mass reduction may include any combination of melting, sublimation, evaporation, ice calving, Aeolian processes like blowing snow, avalanche, and so on. Crucially, the ablation zone is a place of loss. It names the part of the glacier that is actively becoming less glacier. In this, the ablation zone invokes mortality, a loss we understand most poignantly in terms of the corporeal and so rendering the embodied medium of dance all the more incisive.

“You’re a shade of aurora,” writes Pataky, “and just as fleeting—”, an image the dancers interpret in a symmetrically seated pose, backs to the audience, faces tracing the long curve of a sky far beyond the Kennecott Rec Hall ceiling. But soon they rise to embody the poem’s next image, and the aurora, like life, like ice, has passed.

But at heart, “Ablation Zone” as choreographed by Williamson and Fisher is not a dance only about loss. The fleeting, the temporary, the transformative—these are real conditions of the material, but the true substance of the performance for this viewer was in the dancers’ rendition of scale. Indeed, the Wrangell-St. Elias National Park and Preserve includes the largest non-polar icefields in the world, the longest valley glacier in North America, and a handful of other biggests, mosts, and number ones. Scale here is, in a word, stupendous. But human sightlines are limited, both in time and space.

The performance opened a different avenue of perception. It rendered glacial enormity, vastness, and sheer heft newly visible through human form. From molecules to millennia, we saw with strange clarity the air, rock, ice, and years that exceed and envelope us every day. 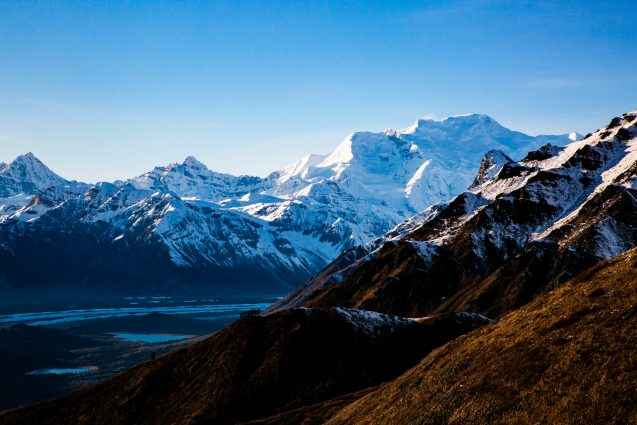 Wrangell Mountains day hike views of the upper Kennicott Valley. The summit of Donoho Peak barely clears this sightline across a minor Bonanza Ridge slope, dwarfed by Mount Blackburn. Part of the upper Kennicott Glacier is visible in part here beyond the Donoho nunatak lakes. Out of frame low down in the foregrounded valley is the Root Glacier. Courtesy of Jeremy Pataky.

Corinna Cook is the author of Leavetakings, an essay collection (University of Alaska Press, 2020). She is a former Fulbright Fellow, an Alaska Literary Award recipient, and a Rasmuson Foundation awardee. Corinna holds a PhD in English and Creative Writing from the University of Missouri. Her next book project explores Alaska-Yukon art, ecology, and history. More at corinnacook.com.