A Journey Into an Alaskan Volcano 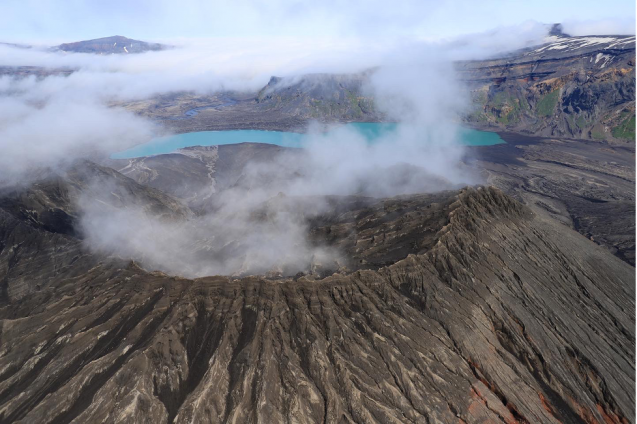 The rim of Cone D—inside the Okmok Volcano caldera—with the blue lake in the background. Credit: Nick Frearson

I’m writing this note from the Steadfast; an old 108 ft long crabber boat equipped with a helipad, crane, five state rooms, kitchen, living room, two skiffs, and a science laboratory. The ship was acquired by the Alaska Volcano Observatory and renovated to serve as a research vessel for assisting in volcano monitoring and fieldwork. The Steadfast has a calm charm to it and is smoothly run by Captain John Whittier, deckhands Angus and Mark, Kait the engineer, and Robert the cook.

The reason I find myself on this boat, anchored along a blurry boundary between the Bering Sea and Pacific Ocean, is because I am a Ph.D. student at Columbia University’s Lamont-Doherty Earth Observatory studying volcanology. I am working on the AVERT (Anticipating Volcanic Eruptions in Real Time) project lead by Dr. Terry Plank, Dr. Einat Lev and Nick Frearson. The mission of this project is to study two volcanoes in the Aleutian Islands off of Alaska by deploying an advance array of instrumentation that will transmit data via satellite in real time. This information will provide scientists the means to anticipate a volcanic eruption before one occurs. 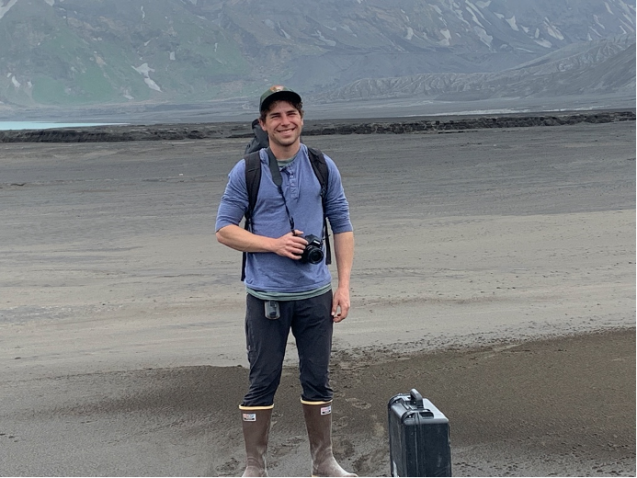 Jasper walking towards the base of Cone D. Credit: Társilo Girona

The expedition has been an incredible mesh of new landscapes, modes of transport, people, and experiences. For starters, this is my first time in Alaska. It is also my first time living on a research vessel, flying in helicopters, riding an ATV, eating fresh halibut caught that very afternoon, and being chased by a herd of bulls. While all of these firsts are stories unto themselves, on July 15th, I entered my first caldera at Okmok Volcano on Umnak Island located approximately 4,200 miles away from New York in the Aleutian Island volcanic chain. A caldera is a large depression at the summit of a volcano formed when the ground collapses above a magma chamber.

Okmok’s caldera is impressively large; a crater that spans over six miles in diameter from rim to rim. The eruption that created Okmok’s caldera in 43 BCE was so massive that scientists argue it was a potential factor in the collapse of the Roman Republic, inducing a volcanic winter that contributed to crop failures, famine, and disease. Inside the caldera, there are six smaller volcanic cones, marking where magma and ash from the depths of the Earth breached the surface in the past. Although the last time Okmok erupted was in 2008, it is still considered an active volcano and is expected to erupt again in the near future. During the 2008 eruption, it produced a massive tuff (ash) cone named Ahmanilix, that sits in the northwest region of the caldera.

The objective of today’s mission was to go inside of Okmok’s caldera and take measurements of carbon dioxide along a walking transect. Sometimes, volcanoes let out excess gas in the surrounding area. This process is called diffuse degassing. Dr. Társilo Girona, one of the scientists on the trip, and a professor at University of Alaska Fairbanks, wanted to investigate whether these areas of excess gas correlate with an increase in volcanic activity. My job was to help record the measurements, take water samples of the blue lake located in the caldera, and assist Girona with soil temperature measurements.

After taking a helicopter flight from the Steadfast over the scenic island, passing over roaming cattle, rusted out WWII bunkers, and yellow wildflowers, we made it to the gates of the caldera. The ‘gates’ of Okmok are essentially the drainage system of the volcano, where a large stream called Crater Creek cuts through the 2500 ft rim, providing a cinematic and convenient pathway into the caldera. Once through the gates, a Martian landscape ensues with massive blocky lava flow deposits, blue and beige lakes, and colorful volcanic cones from historic eruptions. It’s beautiful, but a difficult place to work, with its own weather system that teeters between low lying clouds, sandy gusts, fog, and the occasional bit of sunshine.

Today we were lucky, and the caldera was only clouded on the south side, providing us the opportunity to complete our planned transect between the turquoise lake and the murkier sediment filled lake to the base of Cone D (the volcanic cone located right next to Ahmanilix).

Once the helicopter departed, we wasted no time, condensed our packs, and started hiking towards our target. The easiest route to the base of the cone was through a  stream bed that weaved right between the two lakes. After about an hour of hiking we reached the intersection of the base of Cone D and Ahmanilix, where we started collecting data for our walking transect. 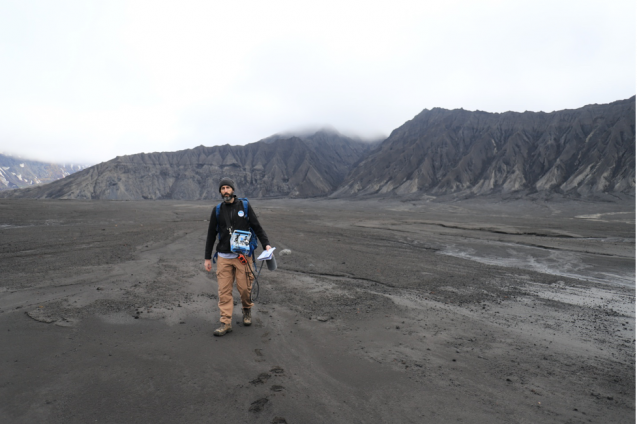 Possibly the most shocking feature I witnessed inside the caldera was the deeply incised gullies eroding the ash cones. Ahmanilix, which is a mere 13 years old, was so deeply incised with dendritic (vein-like) patterns that it appears as though the cone has been in existence for thousands of years. These erosional features illuminate the battle between volcanic forces with rain, wind, and snow in shaping the caldera morphology and how, over time, even volcanoes can be eroded away.

For the CO2 data collection, we stopped every 50 m to take a new measurement. At each stop, we pressed a metal cylinder into the ground to make an air tight seal that minimizes atmospheric influences in order to capture the escaping gases of the caldera. We also took note of the coordinates and soil and air temperatures. This particular type of measurement has never been done at Okmok so we were not sure what to expect.

After the transect was complete, we analyzed the signatures in the ship’s laboratory and didn’t find anything out of the ordinary. Despite the non-groundbreaking findings, however, preliminary diffuse gas measurements are still important to provide a baseline for the future.

After the data was collected, we had to hurry back to the helicopter drop off spot, making sure to avoid the wetter, quicksand ridden areas near the edges of the lakes. We successfully completed the mission and boarded the helicopter, flying back out through the gates towards the Steadfast. I had a warm meal on my mind, and an incredible first caldera experience under my belt. Studying volcanoes this last year, particularly lava flows and volcanic plumes, made the trip into the caldera even more special, and brought to life the countless hours of reading and online classes trying to describe volcanic systems and their otherworldly features. 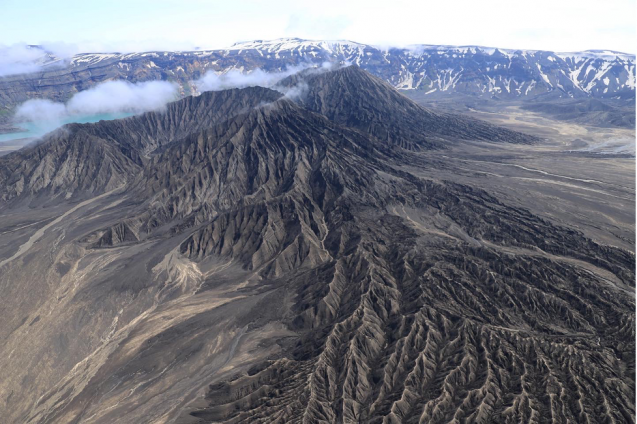