Glacier Funerals Offer a Way of Coping With Ecological Grief

How do you mourn a glacier—a feature inaccessible to most, save for photos and personal accounts? Although the eyes of others provide a wealth of sources to view glaciers, these immense masses often remain intangible, viewed through secondary sources and geographically distant. And yet, it is because of this magnitude that their disappearances are felt by so many.

As communities around the world face loss as a result of climate change, they are faced with what experts now refer to as ecological grief. Many have dealt with this grief in the same way they do the loss of human life—through funerals, such as the 2019 Ok glacier funeral in Iceland, during which a group of about 100 people hiked to the glacier and conducted a ceremony that included poetry readings and speeches. 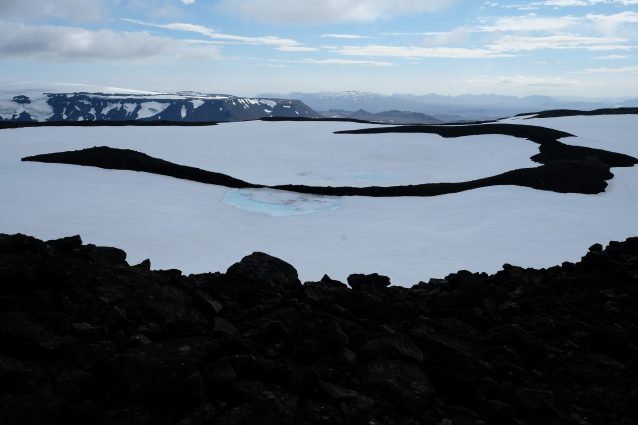 Okjokull in 2018, four years after it was declared “dead” by glaciologist Oddur Sigurðsson. Credit: Gísli Pálsson

As glacier deaths—the technical term adopted by glaciologists to refer to a glacier that no longer fits the criteria—increase, glacier funerals have emerged as one way that communities are commemorating their loss. In 2020, after Orgeon’s Clark Glacier was declared dead, the Oregon Glacier Institute held a funeral and vigil for the glacier. More recently, the Swiss Climate Alliance held a funeral for the Basodino glacier, organizing a free shuttle for people to reach the ceremony itself.

Spreading awareness about a glacier’s death inspires a crucial question: how can press coverage connect global communities to glaciers, while simultaneously balancing the delicate emotional impact of learning about these tragic events?

A new analysis investigating the press coverage of the glacier’s funeral sheds light on how Ok became a symbol for the world we stand to lose to environmental disaster—and what the media can do to utilize ecological grief as a catalyst for action.

Recent research on ecological grief identified that it typically has three central causes: tangible ecological loss, such as the destruction of land or the loss of a certain species; the disruption of identity, especially if that identity is tied to a specific environment; and the fear of future loss. Ok’s case represents a unique convergence of all three, making a funeral seem all the more appropriate as a response to the immense loss felt throughout Iceland. Glaciers—immense, flowing masses of ice and snow that serve as reminders of our environment’s past and have inspired feelings of awe for centuries—are a poignant visual that can compel people who’ve never seen a glacier to feel a profound sense of loss.

In an article in the Associated Press on the funeral, journalist Ben Rosenstein recounted how Icelandic residents in attendance told stories about drinking water from Ok—a powerful memory that narrates both the loss of the glacier and the loss of identity. A plaque erected at the funeral warned those in attendance about the consequences of inaction: “This monument is to acknowledge that we know what is happening and what needs to be done. Only you know if we did it.” News outlets were quick to pick up the plaque’s message and photos of it soon went viral, ensuring that global audiences understood the funeral not only as a mourning ritual, but a dire call to action.

Ok’s funeral made ecological grief tangible to people around the world, who were able to watch the funeral in the documentary “Not Ok,” a film from Rice University anthropologists Cymene Howe and Dominic Boyer, who also organized the funeral and ensured that it made its way into the press. For readers, summaries of the funeral could be found in hundreds of news outlets. The New York Times, The New Yorker, AP News, China Daily, Cyprus Mail—coverage of Ok’s death breached all borders as the world seemed to enter a unified state of mourning for the glacier.

As Ok’s story circulated in global news outlets, a common narrative emerged regarding accounts of the glacier’s death and funeral. Icelandic naming practices meant that along with the glacier’s death, it also lost its former name—“Okjokull,” meaning “Ok’s glacier”—and became “Ok.” In emphasizing the glacier’s name, journalists were able to intentionally emphasize that Ok wasn’t just a glacier; Ok was treated as a lost life, an environmental body that required a grieving process mirroring those conducted for human lives. 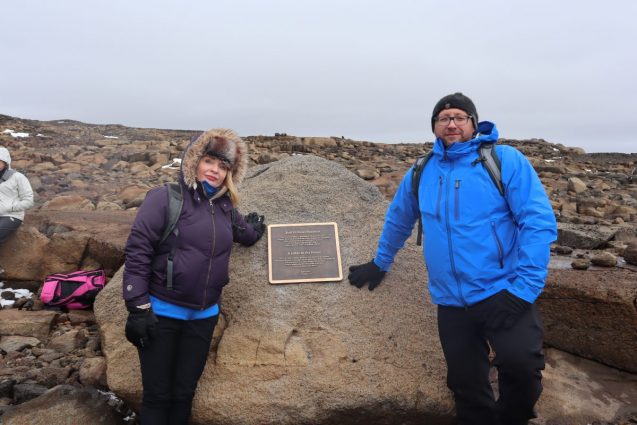 Conversations about ecological grief are nothing new, although they are increasingly more frequent as anxieties about the future of our earth grow in light of recent climate-related hurricanes, droughts, and floods. The loss of beauty, such as the death of Ok, the Clark Glacier, and the Basodino glacier, is a powerful motivator for people to realize the perilous loss of identity that stems from the loss of glaciers—structures that serve as important cultural landmarks, as the Ok glacier does for the people of Iceland.

More perilous environmental crises, such as hurricanes, fires, and droughts further emphasize the climate crisis’ intense effects on people’s everyday lives and amplify its psychological consequences. Hurricane Ida has had a death toll of 82, a number that keeps climbing as authorities further survey the damage left in its wake from Louisiana to New York. In 2017, the American Psychological Association published a seventy-page report on mental health and climate change that outlined “impacts, implications, and guidance” for ecological distress. A year later, a national survey found that almost 51 percent of Americans feel “disgusted” or “helpless” about global warming.

At the center of climate-related mental health research lies an undeniable trend: the communities that are experiencing the most severe manifestations of climate anxiety are also the ones who are disproportionately losing features of their environment. Indigenous populations and minority groups are currently facing the worst effects of climate change.

In India, 170 million people known as Dalits, who are economically and socially excluded, were impacted most severely by the severe monsoon floods in 2007, along with two other minorities, Adivasis and Muslims. Government aid post-emergency failed to reach Dalit villages. In the United States, a similar pattern has been observed over and over again as extreme weather events affect underserved communities.

Extreme environmental loss, in turn, leads to a heightened emotional toll that includes grief, anxiety, and new psychological phenomena such as “solastalgia,” the feeling of homesickness for a place that one still inhabits. Solastalgia has become one of the key terms used to describe the overwhelming emotional toll of environmental loss in Inuit and other Arctic inhabitants.

For those who are suffering from climate anxiety, prescriptive recommendations for individuals often focus on taking actions against climate change, furthering education on climate change, and other traditional coping strategies, such as exercise or therapy. For larger communities, mourning rituals can serve as a vital component for communal grief related to losses that touch the lives of many. It is all the more apt that funerals are surfacing as opportunities for mass grieving; glaciers, which can occupy vast territories, touch the lives of many.

As the Okjokull funeral exemplifies, a mourning ritual isn’t just an opportunity for psychological grieving—it’s a chance for the media to publicize the scope of climate-related emotional and physical loss and push people towards action. 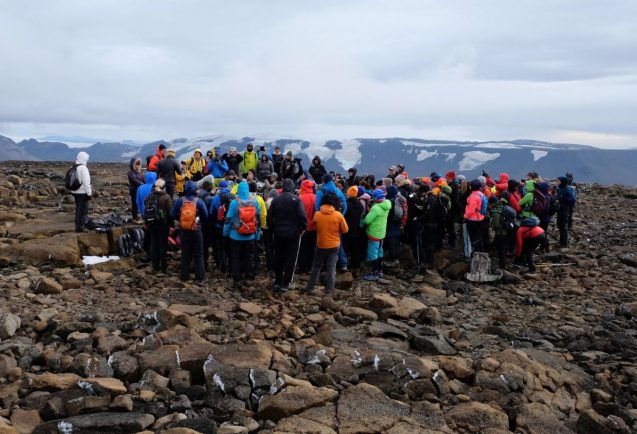 In 2020, the BBC featured an article on climate grief, highlighting the need to develop a new vocabulary for eco-anxiety, such as “snow anxiety” or “winter grief” in reference to place-specific emotions. A quick Google search will produce hundreds of articles on eco-grief from news sources all over the world, including local newspapers, research institutes, and national media platforms. However, navigating depictions of climate disasters, as well as eco-grief, is a challenging territory. Extensive coverage coupled with photos of catastrophes—the kinds of photos and headlines that garner clicks—can easily make people feel paralyzed by an overwhelming sense of dread.

In an interview with GlacierHub, Catherine Bruns, a researcher in Communication Studies at the University of Minnesota-Twin Cities, emphasized that “mourning rituals are a valuable opportunity to publicize survivors, and that concretizes what is at stake for the future.”

“If media coverage of climate casualties consistently directed readers to donate to climate justice nonprofits, sign petitions to strengthen environmental legislation, or participate in political protests, we would not only make faster progress in combating climate change, but we would also reduce our own climate anxiety along the way,” explained Bruns.

Janet Lewis, a psychiatrist and founding member of the Climate Psychiatry Alliance, remarked in an interview with GlacierHub that “in order for people to deal with information related to climate change, it’s important for them to feel contained. Methods of containment help us understand ourselves as part of something larger. This helps us bear the difficult feelings well enough to think clearly and take action.”

She added, “If someone is conducting a funeral for a glacier, it’s important to be able to affirm the ways in which we continue to be a part of something larger, even as we’re losing many things and the relationships towards those things.”

As the world continues to undergo inevitable environmental loss, ecological mourning rituals may become a common routine, providing space for people to cope with the novel emotional burden of a rapidly changing world. Making them public through media coverage can further multiply their impact, bringing awareness to at-risk populations that are experiencing extreme loss in the present in a way that bridges empathy with action. Organizations like the Solutions Journalism Network are tackling pressing questions about how journalists can adopt a solutions-based approach to press coverage.

While the need for such funerals represents a tragic reality, they also hold immense potential—an opportunity for people to unite in a moment of mourning before returning to the pressing task at hand: ensuring that our relationship with the environment does not become an ever-repeating series of funerals.