New evidence from the bottom of a lake in the remote North Atlantic Faroe Islands indicates that an unknown band of humans settled there around 500 AD—some 350 years before the Vikings, who up until recently have been thought to have been the first human inhabitants. The settlers may have been Celts who crossed rough, unexplored seas from what are now Scotland or Ireland. The findings appear today in the journal Communications Earth & Environment.

The Faroes are a small, rugged archipelago about midway between Norway and Iceland, some 200 miles northwest of Scotland. Towering cliffs dominate the coasts; buffeted by strong winds and cloudy weather, the rocky landscape is mostly tundra. There is no evidence that Indigenous people ever lived there, making it one of the planet’s few lands that remained uninhabited until historical times. Past archaeological excavations have indicated that seafaring Vikings first reached them around 850 AD, soon after they developed long-distance sailing technology. The settlement may have formed a stepping stone for the Viking settlement of Iceland in 874, and their short-lived colonization of Greenland, around 980. 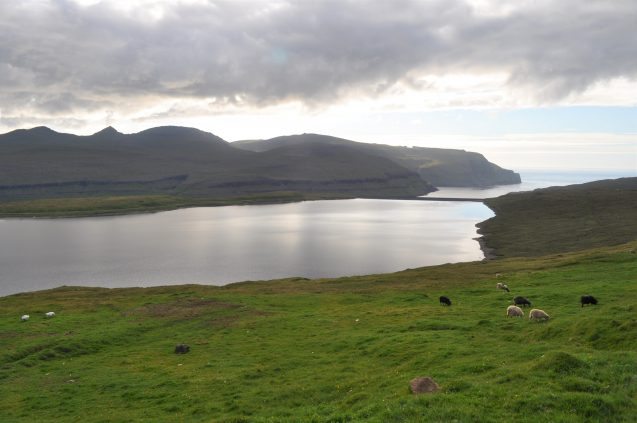 The bed of this lake on the island of Eysturoy contains a sediment layer laid down around 500 AD that documents the first arrival of sheep, and thus humans, on the archipelago. (Raymond Bradley/UMass Amherst)

The new study, led by scientists at Columbia University’s Lamont-Doherty Earth Observatory, is based on lake sediments containing signs that domestic sheep suddenly appeared around 500, well before the Norse occupation. Previously, the islands did not host any mammals, domestic or otherwise; the sheep could have arrived only with people. The study is not the first to assert that someone else got there first, but the researchers say it clinches the case.

In the 1980s, researchers determined that Plantago lanceolata, a weed commonly associated with disturbed areas and pastures and often used as an indicator of early human presence in Europe, showed up in the Faroes around 2200 B.C. At the time, this was deemed possible evidence of human arrival. However, seeds could have arrived on the wind, and the plant does not need human presence to establish itself. Likewise, studies of pollen taken from lake beds and bogs show that some time before the Norse period, woody vegetation largely disappeared—possibly due to persistent chewing by sheep, but also possibly due to natural climatic changes.

Some Medieval texts suggest that Irish monks reached the islands by around 500. For one, St. Brendan, a famous and far-traveled early Irish navigator, was said to have set out across the Atlantic with comrades from 512 to 530, and supposedly found a land dubbed the Isle of the Blessed. Later speculations and maps say that this was the Faroes—or the far southerly Azores, or the Canary Islands—or that Brendan actually reached North America. There is no proof for any of this. Centuries later, in 825, the Irish monk and geographer Dicuil wrote that he had learned that hermits had been living in some unidentified northern islands for at least 100 years. Again, later speculations landed on on the Faroes, but there was never any proof. 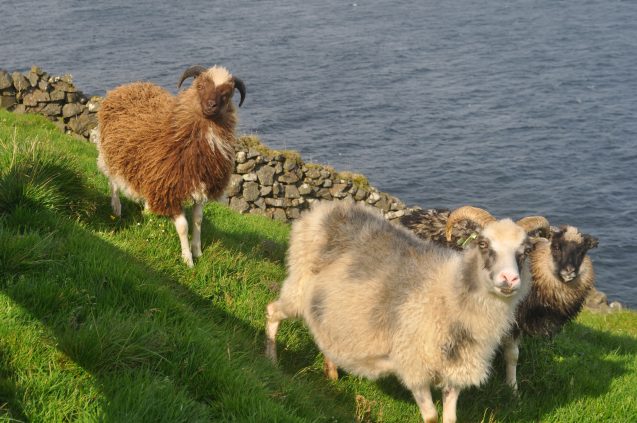 Faroese sheep have been a staple of the culture for centuries, and are found nearly everywhere on the islands. (William D’Andrea/Lamont-Doherty Earth Observatory)

The first physical evidence of early occupation came with a 2013 study in the journal Quaternary Science Reviews, which documented two patches of burnt peat containing charred barley grains found underneath the floor of a Viking longhouse on the Faroese island of Sandoy. The researchers dated the grains to somewhere between 300 and 500 years before the Norse; barley was not previously found on the island, so someone must have brought it. For many archaeologists, this constituted firm evidence of pre-Viking habitation. However, others wanted to see some kind of corroboration before declaring the case closed.

The researchers in the new study employed a non-archaeological approach. In a small vessel, they sailed out onto a lake near the village of Eiði, site of an ancient Viking locale on the island of Eysturoy. Here, they dropped weighted open-ended tubes to the bottom to collect muck—sediments dropped year by year and built up over millennia, forming a long-term environmental record. The cores penetrated down about 9 feet, recording some 10,000 years of environmental history. The scientists had started out hoping to better understand the climate around the time of the Viking occupation, but came up with a surprise.

Starting at 51 centimeters (20 inches) down in the sediments, they found signs that large numbers of sheep had suddenly arrived, most likely some time between 492 and 512, but possibly as early as 370. The telltale signs: identifiable fragments of sheep DNA, and two distinctive types of lipids produced in sheep digestive systems—so-called fecal biomarkers. (The  researchers also found bits of human DNA in the same layers, but suspect modern contamination during handling of the samples.) A layer of ash deposited from a known Icelandic volcano eruption in 877 helped them reliably date the sediment sequences below.

“We see this as putting the nail in the coffin that people were there before the Vikings,” said lead author Lorelei Curtin, who did the research as a grad student at Lamont-Doherty. She noted that while the Faroes look rugged and wild today, practically every square inch of vegetation has been chewed up by Faroese sheep, a staple of the Faroese diet that are found nearly everywhere. 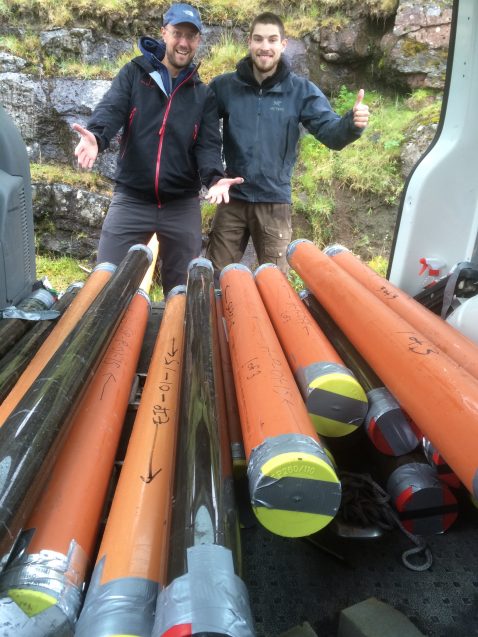 Beyond the earlier discovery of barley grains, no one has yet found physical remains of pre-Norse people, but the researchers say this is unsurprising. The Faroes contain very few sites suitable for settlement, mainly flat areas at the heads of protected bays where the Norse would have built over earlier habitations. On the other hand, “You see the sheep DNA and the biomarkers start all at once. It’s like an off-on switch,” said Lamont-Doherty paleoclimatologist William D’Andrea, who co-led the study. He points out that the markers correspond well with the Irish monks’ accounts. But, he said, “Those early writings are tenuous—it’s all circumstantial.”

So, who were these early settlers? D’Andrea and Curtin speculate that they could have been Celts, though not necessarily monks. For one, many Faroese place names derive from Celtic words, and ancient, though undated, Celtic grave markings dot the islands. Also, DNA studies of the modern Faroese show that their paternal lineages are mainly Scandinavian, while their maternal lineages are mainly Celtic. Other regions in the north Atlantic show this asymmetry—male Viking settlers are thought to have brought Celtic brides with them—but the Faroes have the highest level of maternal Celtic ancestry, suggesting an existing Celtic population that preceded the Vikings.

Kevin Edwards, an archaeologist and environment researcher at Scotland’s University of Aberdeen, and coauthor of the 2013 barley-grains paper, said the new study “has produced convincing and exciting evidence from another island within the archipelago” of earlier human occupation. He added: “Is similar evidence to be found in Iceland, where similar arguments are made for a pre-Norse presence, and for which tantalizingly similar archaeological, pollen-analytical and human DNA are forthcoming?”

Related: The Link Between Viking Settlements and Climate