A couple of days into a seven-day floating trip down the Chitina River in Wrangell-St. Elias, Jonathan Moore was low on food when he came across a small stream near a river bed. Usually, streams near glaciers are filled with sediment, seemingly lacking with life, but this one ran clear, jammed with salmon. Moore pulled out his fishing rod, caught one and cooked it for dinner.

The experience was “visceral” according to Moore, a professor of biological sciences at Simon Fraser University, a university in British Columbia. “These landscapes are changing so fast and salmon are capitalizing on it,” he told GlacierHub. 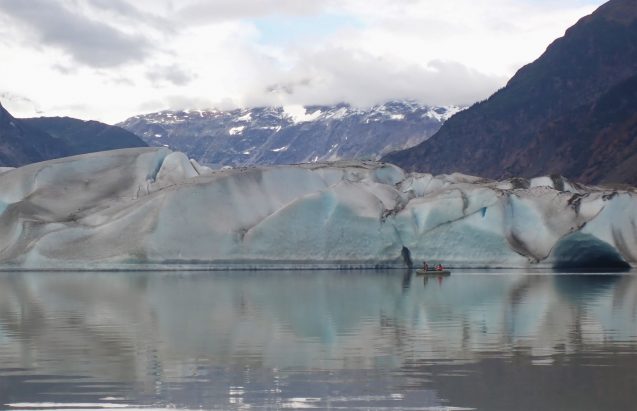 The Tulsequah Glacier, British Columbia is a remote glacier draining from the Alaska-Canada boundary mountains, where the researchers expect to see some biggest increases in salmon habitat. Courtesy of Jonathan Moore, Simon Fraser University

Moore credits this experience in 2005 as the genesis for his research on Pacific salmon. But it wasn’t until Kara Pitman, a postdoc at Simon Fraser University, approached him about melding her interest in glaciers and his with salmon that they decided to study how these same glacial valleys, once filled with ice and now increasingly flowing with water, will transform salmon habitat in a warming climate.

In their recent study, led by Pitman, a team of glaciologists, climate scientists and “salmon folks” like Moore found that in a moderate emissions scenario, more than 3,700 miles of new Pacific salmon habitat could be produced by 2100 — a greater length than the Mississippi River. The study also highlights the need to manage not just current, but also future salmon conservation plans, especially as glaciers peel back to reveal potential mining sites, Moore explained.

At first these newly glaciated streams are inhospitable to salmon. They are often too cold and extremely turbid. But over time the ecosystem begins to stabilize: the water warms to a suitable temperature for salmon, sediment load lowers, vegetation grows around the river bed and insects colonize to create food webs. In just a few short decades, this process can allow salmon to move into a new stream, Moore explained.

The researchers expect for some salmon to colonize faster than others. At first salmon lay their eggs in freshwater and when the eggs hatch, juvenile salmon will stay in the freshwater all year depending on the species. In the spring they head out to the ocean, where they will spend one to five years, before returning to their spawning beds in the freshwater. Of the five Pacific salmon species that live in the North Pacific waters of the US and Canada, the populations of pink salmon and sockeye salmon are expected to colonize the quickest because they do not require habitats as stable as coho or chinook salmon do. Moore added that salmon populations are expected to increase the most in the western regions with the largest glaciers, like British Columbia and up through south-central Alaska. 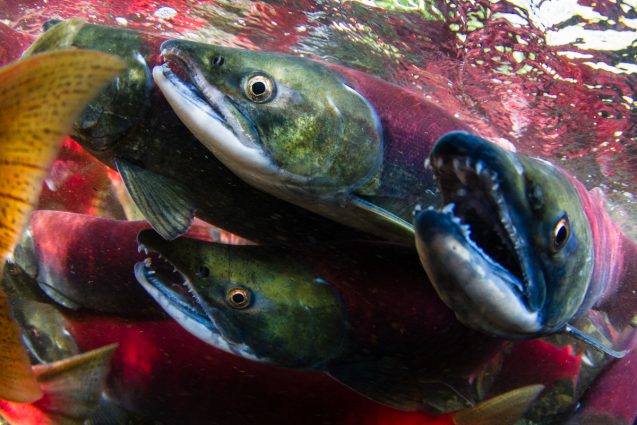 Sockeye salmon is one species expected to grow rapidly due to their ability to colonize quickly and move to the oceans as juveniles. Credit: Oregon State University/Wikimedia Commons

At first glance, the study seems to highlight a silver-lining of climate change — more habitat for Pacific salmon. But the story is far more complex, Matthew Sloat told GlacierHub. Sloat is the science director at Wild Salmon Center, a non-profit conservation organization based in Portland Oregon, and a co-author of the study. Salmon are no strangers to a dynamic and changing habitat. Because of climate change, the species face new and unfamiliar risks, like ocean heat waves, ocean acidification, sea level rise, and drought. Rapid glacial loss can also spur natural hazards such as landslides and glacier outbursts, which adds uncertainty to how fast salmon populations may increase, he explained.

The study highlights what lies beneath retreating glaciers to inform proactive management of future salmon habitat, Sloat said. Predicting where salmon may end up in a warmer climate can inform environmental risk assessments and stop harmful human development projects, such as mining, from being approved, he noted.

As the glaciers pull back, new territory is exposed, offering local opportunities for mining companies to capitalize on minerals, such as gold. Currently, there are mineral claims in southeast Alaska and mines have been approved in recently de-glaciated areas in the headwaters of the transboundary Unuk River.

While mining could provide economic benefits for local communities, Sloat warns of its potential negative effects on salmon populations. When extracting minerals, mining companies often use harmful chemicals, such as cyanide which pollutes the water locally and downstream. This can have a detrimental effect on the water quality and salmon habitat. “If we expect to be able to take advantage of salmon for fisheries in the future, we need to weigh that up against other forms of development,” he added. 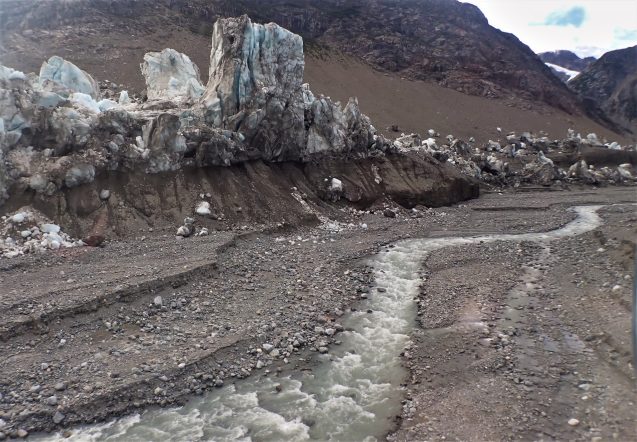 The Tulsequah drainage of the Taku River is an example of a newly glaciated stream and salmon habitat. Courtesy of Jonathan Moore, Simon Fraser University

In the future, decision-makers will have to choose what they value more: gold or “red gold,” referencing salmon, Sue Mauger told GlacierHub. Mauger is the science and executive director of Cook Inletkeeper, a community-based nonprofit organization that aims to protect Alaska’s Cook Inlet watershed and was not involved in the study. In communities surrounding Cook Inlet, salmon are a part of daily life and an important source of food security for Indigenous and subsistence communities, Mauger said. To sustain this food source, decision-making must value salmon habitat as a holistic system, she noted.

“Salmon are inspiring because they use so much of our landscape and oceans,” Mauger said. “The idea that we’ve got new emerging habitats is really exciting. However, I worry that we will forget the importance of connectivity.” As new streams open up, infrastructure in the lower watersheds where the majority of people live could block salmon from returning upstream to spawn and lay their eggs.

Although glacier retreat offers some new possibilities for salmon, climate change and the choices made on how their habitat is managed remain the biggest sources of uncertainty for their future wellbeing. “We aren’t going to be successful if we look at just individual projects with blinders and not consider the full context of where [climate impacts] might happen,” Mauger concluded, reiterating the value and security salmon bring to local communities across the Northwest.