For the first time, researchers have monitored air pollution in Lomé, the capital city of Togo in West Africa, over multiple years. The initial results, published on March 10, reveal that the city frequently experiences unsafe levels of air pollution. The study was led by researchers from Columbia University’s Lamont-Doherty Earth Observatory and the Université de Lomé. 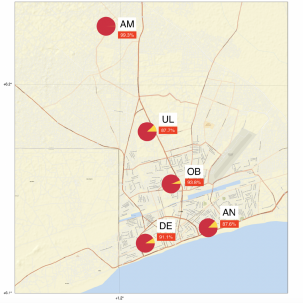 Globally, air pollution is the fourth leading risk factor for premature death. It is estimated to have contributed to 6.67 million deaths in 2019, including 1.1 million in Africa.

The new study focused on PM2.5, a form of air pollution made up of microscopic particles that can be inhaled. Inside the body, these particles — which come from vehicles, coal-burning power plants, waste incineration and other human and natural sources — contribute to asthma, heart disease, lung cancer, and more.

Yet PM2.5 levels, and their accompanying impacts on human health, remain largely unmonitored and understudied in many areas of the world. Efforts have largely focused on the United States and Europe.

To bridge this gap, Columbia Climate School researchers launched the Clean Air Toolbox for Cities project to identify and address the causes of urban air pollution in India, sub-Saharan Africa, and Indonesia. The study in Togo is part of this effort.

Air pollution data is sparse in many countries because a single monitor can cost several hundred thousand dollars, and several monitors are needed to track levels across a city.

Clean Air Toolbox researchers overcome this challenge by using low-cost PM2.5 sensors that only cost about $250 each. Study coauthor Daniel Westervelt of Columbia University installed five of these sensors across Lomé in 2019, and the sensors have been maintained by local colleagues since then.

While the low-cost sensors gather high-quality data, “they are not perfect,” said lead author Garima Raheja, a PhD candidate at Columbia University. “Sometimes they lose Wi-Fi connection and we lose data until someone can go in and fix the sensor. But thanks to the relentless efforts of our collaborators and their students in Lomé, we’ve been able to maintain a great record of air quality and collaborate on analyzing the data that comes from it.”

Several years’ worth of data showed that Lomé’s annual PM2.5 averages were four or five times greater than the World Health Organization’s latest guidelines, which state that yearly average concentrations of PM2.5 should not exceed 5 micrograms per cubic meter.

Some of the air pollution in Lomé came from human activities. The sources included vehicle exhaust from nearby highways, dust from unpaved roads, waste burning, and cooking emissions.

There was also a strong natural source of PM2.5 pollution. The Harmattan — a dry, dusty wind that blows from the Sahara during December through February — increased the PM2.5 concentration by up to 58%. However, daily and weekly trends in PM2.5 pollution were largely controlled by human-caused emissions. 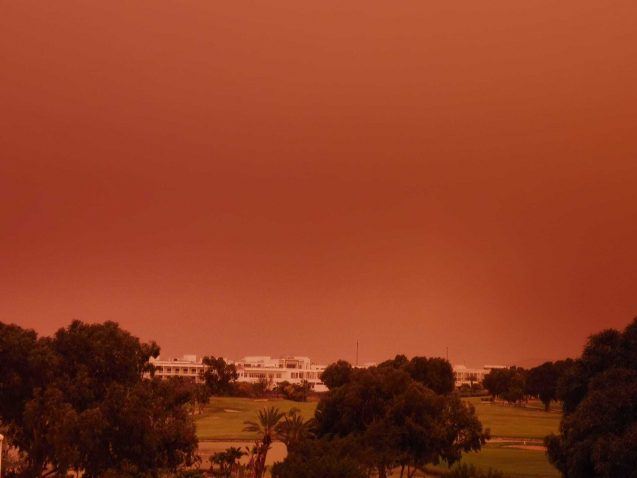 In December through February, a dry wind known as the Harmattan blows in dust from the Sahara and dramatically increases PM2.5 levels in Lomé. Photo: Wahid Mellouki, Centre National de la Recherche Scientifique

“These first measurements highlight the need for air quality improvement in a rapidly growing urban metropolis,” the authors write in the paper. Currently, Lomé’s 1.4 million residents are exposed to these unsafe levels of air pollution, and the city is expected to grow in the coming years.

“While it is difficult to control the Harmattan, we can still reduce anthropogenic contributions to air pollution,” said Raheja. “I hope this work will contribute to creating strong mitigation policies that protect the residents of Lomé.”

Although Togo does not currently have its own air quality monitoring standards, in 2020 it adopted a plan to reduce air pollution and fight climate change. This research helps to establish baseline air pollution levels so that future reductions can be quantified. “It’s hard to fix a problem when you don’t know what you’re starting with,” Raheja pointed out.

The researchers plan to continue measuring Lomé’s PM2.5 levels, and hope to expand their network of sensors to better understand the distribution of air pollution in the growing city.

“Understanding the air quality is the first step,” said Raheja. “Making air quality better can take a lot of work and a lot of years, but in the meantime, early warning systems that use air quality forecasting could help alert residents of especially bad air pollution days.”