In Madagascar, a Hurricane Simulation Transforms Into Real-life Disaster Response 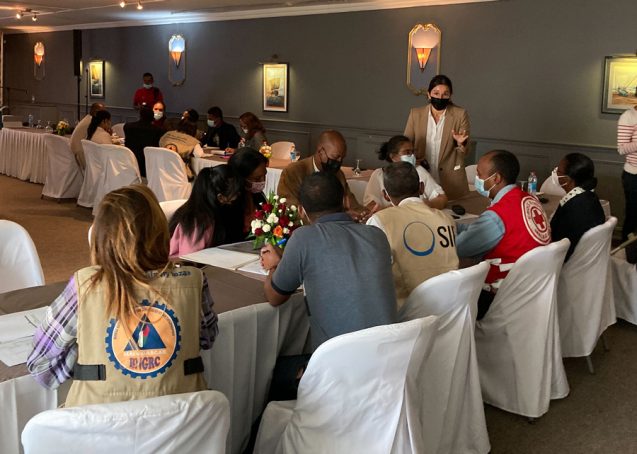 Antonia Samur, a staff associate at Columbia Climate School’s National Center for Disaster Preparedness, speaks with participants at a workshop before the arrival of Cyclone Batsirai. Photo: NCDP

A recent hurricane simulation exercise to test Madagascar’s emergency preparedness quickly transformed into a real-life disaster response scenario as a tropical cyclone descended upon the island.

Researchers from the Columbia Climate School’s National Center for Disaster Preparedness (NCDP) had spent months preparing to run a tropical cyclone simulation to test how well Madagascar’s newly developed customs clearance procedures function during an emergency. The exercise was developed in collaboration with the Global Alliance for Trade Facilitation, and integrated into ongoing work under the World Customs Organization COVID-19 project, funded by the Government of Japan.

But as the date of the simulation drew nearer, Tropical Cyclone Batsirai came barreling toward the island with the strength of a Category 4 hurricane.

Accustomed to dealing with the unexpected, NCDP’s disaster experts and their partners quickly pivoted, repurposing their workshop in order to address the more immediate needs identified by Madagascar’s National Office of Risk and Disaster Management (the Bureau National de Gestion des Risques et des Catastrophes, or BNGRC), and the Customs agency (Douane Malagasy). In doing so, they helped to support several government agencies as they prepared for and dealt with the impacts of Batsirai.

Madagascar is currently experiencing a severe famine, caused by its worst drought in 40 years. The BBC reported in December that some 1.3 million people are struggling to find food, and 28,000 face starvation.

“There are kids dying of malnutrition every day,” said Antonia Samur, a staff associate at NCDP, who facilitated the work in Madagascar with NCDP director Jeffrey Schlegelmilch. “A lot of aid organizations send food, but sometimes the customs clearing processes can take a really long time. Emergency Management mentioned a couple of examples where food just ended up going bad while waiting for clearance in the ports, which is awful when you have so many people that are malnourished and going through famine.”

With incoming COVID medical supplies, it became even more important to be able to move humanitarian aid quickly across borders. That’s why Madagascar’s Customs began working with the BNGRC and the World Customs Organization to develop practical guides for customs clearance for humanitarian goods after disasters. As these guides were developed, they needed to be tested in a realistic environment, which led to the connection with the Global Alliance for Trade Facilitation and NCDP for help.

Together, they came up with a plan to test the customs operating procedures in a fictional disaster scenario and find ways to safely improve the flow of humanitarian aid into the country.

A Change of Plans

The original plan was to run the scenario — a hurricane simulation — on February 11. But as Tropical Cyclone Batsirai gained strength and took aim for Madagascar, the situation became more urgent.

Based on input from Customs and the BNGRC, the researchers instead held a pre-landfall workshop on February 4 to review the practical guide for customs clearance procedures, discuss how they could be useful in the response to Batsirai, and to make stakeholders more familiar with them and more likely to use them. Then there would be an after-action workshop on February 11, after the storm passed, to discuss findings, recommendations, and plans for improvement, as well as to integrate new lessons learned in the initial response.

Fortunately, “we already had a structure for talking about how the customs guides would work in the event of a disruptive event — in this case, a cyclone,” explained Schlegelmilch. “So it didn’t require major changes to the methodology.”

Ordinarily, when NDCP runs disaster simulations, the fictional scenario provides an experiment or a petri dish that allows the researchers to evaluate procedures and preparedness. In this case, Schlegelmilch said, “We didn’t need a petri dish because there was a real life hurricane coming, so we adapted the objectives and the discussion questions and the evaluation criteria around that. But we were still testing the same thing: the usefulness of the customs guides.”

But the last-minute change of plans did require some flexibility and adaptation. The facilitator who had been booked to coordinate the exercise wasn’t available for the earlier date. So the day before the first workshop, with the hurricane bearing down on them, Schlegelmilch asked Samur to facilitate for the day. It was “probably the most nervous I’ve ever been facilitating a workshop — we didn’t want to miss anything,” said Samur, who speaks French conversationally but not fluently. With the help of local partners who strategically jumped in, the event translators and Google Translate, she got through it and even received some compliments from attendees (after having warned the forgiving audience of the language barrier).

The change of plans also required a massive pivot for the event logistics coordinated by the team from the Global Alliance for Trade Facilitation. Arrangements with facilities, translators, invitations, documentation and everything needed to make this happen were shifted to accommodate the revised approach. A logistical process that normally takes weeks to coordinate was shifted in just a few days.

As Batsirai drew nearer, a colleague supporting the project, Andrew Kruczkiewicz at Columbia’s International Research Institute for Climate and Society, kept the group updated on the storm track, what risks to be concerned about, and whether they should evacuate.

The workshop’s attendance maxed out, drawing 30 representatives from aid organizations such as the World Food Program, the Red Cross, and UNICEF, as well as from across various government agencies, including international affairs, health, customs, and emergency management. Private sector logistics partners were also in attendance.

“The fact that one day before the arrival of the cyclone, we had a room full of people who had to respond — that told us that this was a very important issue,” said Samur.

Although the imminent arrival of Batsirai limited the opportunity to make major changes, Samur thinks it’s important that they were able to bring all these important stakeholders to the table. “It was great to see issues being resolved just by the fact that they were just in the same room being able to talk through these procedures,” she said.

“What we’re providing is information to help with these processes and to help with refining them,” Schlegelmilch added. “And in some ways, it’s a matter of people just being more aware that they exist and you see an immediate benefit.” 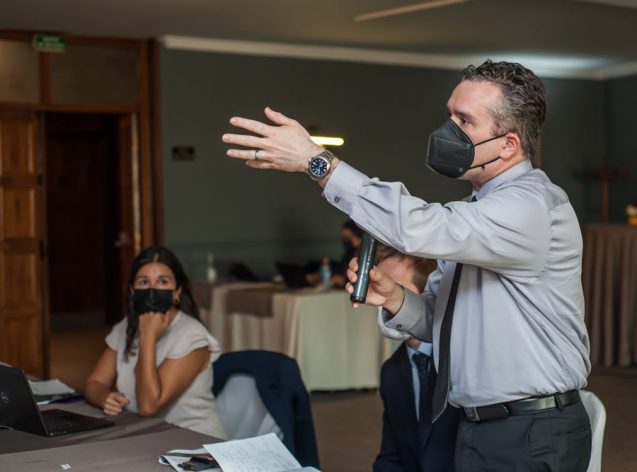 Jeffrey Schlegelmilch, director of the National Center for Disaster Prepareness, asks a question during the workshop that took place after the cyclone hit. Photo: Rindra Rambelomanana

Attendees at both the pre-landfall and after-action workshops discussed what worked well, what didn’t, and proposed a variety of solutions that might help humanitarian aid to pass through Customs in a timely manner. These included:

“We didn’t feed 10,000 people or create shelters or anything like that,” said Schlegelmilch. “We focused on the most mundane and excruciatingly boring administrative processes. And yet it’s the gateway to all of the aid and all of the assistance that is in the photographs and on the newsreels. And so I believe that the work has a very large impact.”

25 Years of Translating Climate Science Into Action
Subscribe
Login
0 Comments
Inline Feedbacks
View all comments
wpDiscuz
0
0
Would love your thoughts, please comment.x
()
x
| Reply
This website uses cookies as well as similar tools and technologies to understand visitors' experiences. By continuing to use this website, you consent to Columbia University's usage of cookies and similar technologies, in accordance with the Columbia University Website Cookie Notice.Close