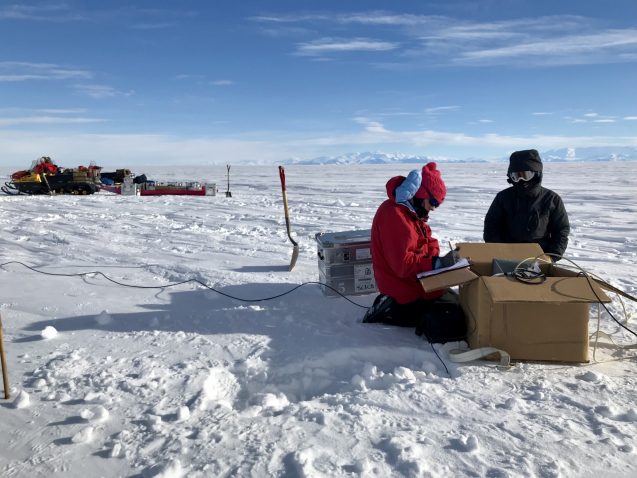 Many scientists say that liquid water is a key to understanding the behavior of the frozen form found in glaciers. Melt water is known to lubricate their gravelly bases and hasten their march toward the sea. In recent years, researchers in Antarctica have discovered hundreds of interconnected liquid lakes and rivers cradled within the ice itself. And, they have imaged thick basins of sediments under the ice, potentially containing the biggest water reservoirs of all. But so far, no one has confirmed the presence of large amounts of liquid water in below-ice sediments, nor studied how it might interact with the ice.

Now, a team from six research institutions has for the first time mapped a huge, actively circulating groundwater system in deep sediments in West Antarctica. They say such systems, probably common in Antarctica, may have as-yet unknown implications for how the frozen continent reacts to, or possibly even contributes to, climate change. The research appears today in the journal Science.

“People have hypothesized that there could be deep groundwater in these sediments, but up to now, no one has done any detailed imaging,” said the study’s lead author, Chloe Gustafson, who did the research as a graduate student at Columbia University’s Lamont-Doherty Earth Observatory. “The amount of groundwater we found was so significant, it likely influences ice-stream processes. Now we have to find out more and figure out how to incorporate that into models.”

Scientists have for decades flown radars and other instruments over the Antarctic ice sheet to image subsurface features. Among many other things, these missions have revealed sedimentary basins—whose porous qualities offer the potential to store groundwater—sandwiched between ice and bedrock. But airborne geophysics can generally reveal only the rough outlines of such features, not water content or other characteristics. In one exception, a 2019 study of Antarctica’s McMurdo Dry Valleys used helicopter-borne instruments to document a few hundred meters of subglacial groundwater below about 350 meters of ice. But most of Antarctica’s known sedimentary basins are much deeper, and most of its ice is much thicker, beyond the reach of airborne instruments. In a few places, researchers have drilled through the ice into sediments, but have penetrated only the first few meters. Thus, models of ice-sheet behavior include only hydrologic systems within or just below the ice.

This is a big deficiency; most of Antarctica’s expansive sedimentary basins lie below current sea level, wedged between bedrock-bound land ice and floating marine ice shelves that fringe the continent. They are thought to have formed on sea bottoms during warm periods when sea levels were higher. If the ice shelves were to pull back in a warming climate, ocean waters could re-invade the sediments, and the glaciers behind them could rush forward and raise sea levels worldwide.

The researchers in the new study concentrated on the 60-mile-wide Whillans Ice Stream, one of a half-dozen fast-moving streams feeding the Ross Ice Shelf, the world’s largest, at about the size of Canada’s Yukon Territory. Prior research has revealed a subglacial lake within the ice, and a sedimentary basin stretching beneath it. Shallow drilling into the first foot or so of sediments has brought up liquid water and a thriving community of microbes. But what lies further down has been a mystery. 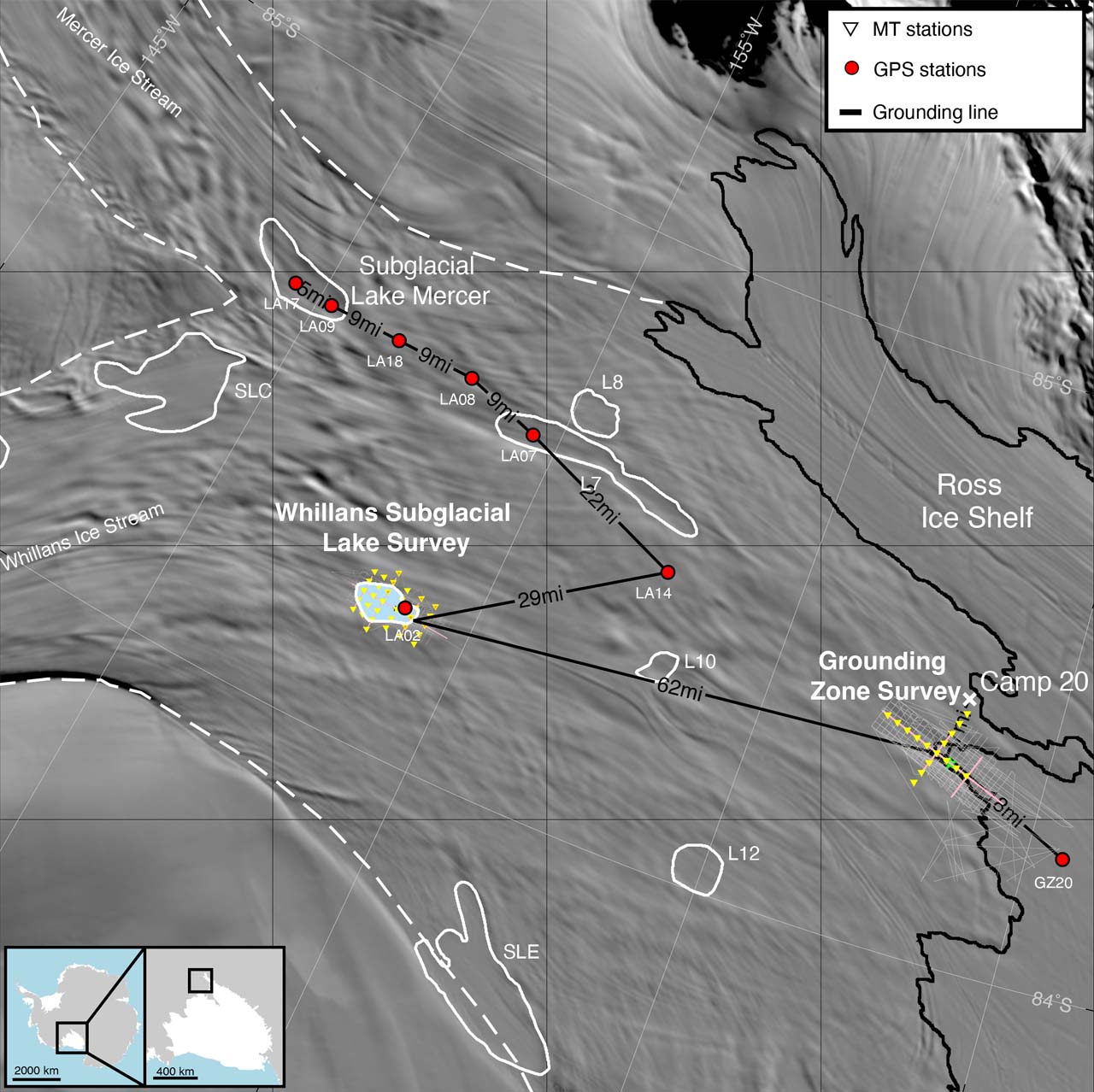 In late 2018, a U.S. Air Force LC-130 ski plane dropped Gustafson, along with Lamont-Doherty geophysicst Kerry Key, Colorado School of Mines geophysicist Matthew Siegfried, and mountaineer Meghan Seifert on the Whillans. Their mission: to better map the sediments and their properties using geophysical instruments placed directly on the surface. Far from any help if something went wrong, it would take them six exhausting weeks of travel, digging in the snow, planting instruments, and countless other chores.

(See videos and images of the expedition)

The team used a technique called magnetotelluric imaging, which measures the penetration into the earth of natural electromagnetic energy generated high in the planet’s atmosphere. Ice, sediments, fresh water, salty water and bedrock all conduct electromagnetic energy to different degrees; by measuring the differences, researchers can create MRI-like maps of the different elements. The team planted their instruments in snow pits for a day or so at a time, then dug them out and relocated them, eventually taking readings at some four dozen locations. They also reanalyzed natural seismic waves emanating from the earth that had been collected by another team, to help distinguish bedrock, sediment and ice.

Their analysis showed that, depending on location, the sediments extend below the base of the ice from a half kilometer to nearly two kilometers before hitting bedrock. And they confirmed that the sediments are loaded with liquid water all the way down. The researchers estimate that if all of it were extracted, it would form a water column from 220 to 820 meters high—at least 10 times more than in the shallow hydrologic systems within and at the base of the ice—maybe much more even than that.

Salty water conducts energy better than fresh water, so they were also able to show that the groundwater becomes more saline with depth. Key said this makes sense, because the sediments are believed to have been formed in a marine environment long ago. Ocean waters probably last reached what is now the area covered by the Whillans during a warm period some 5,000 to 7,000 years ago, saturating the sediments with salt water. When the ice readvanced, fresh melt water produced by pressure from above and friction at the ice base was evidently forced into the upper sediments. It probably continues to filter down and mix in today, said Key.

The researchers say this slow draining of fresh water into the sediments could prevent water from building up at the base of the ice. This could act as a brake on the ice’s forward motion. Measurements by other scientists at the ice stream’s grounding line—the point where the landbound ice stream meets the floating ice shelf—show that the water there is somewhat less salty than normal seawater. This suggests that fresh water is flowing through the sediments to the ocean, making room for more melt water to enter, and keeping the system stable. 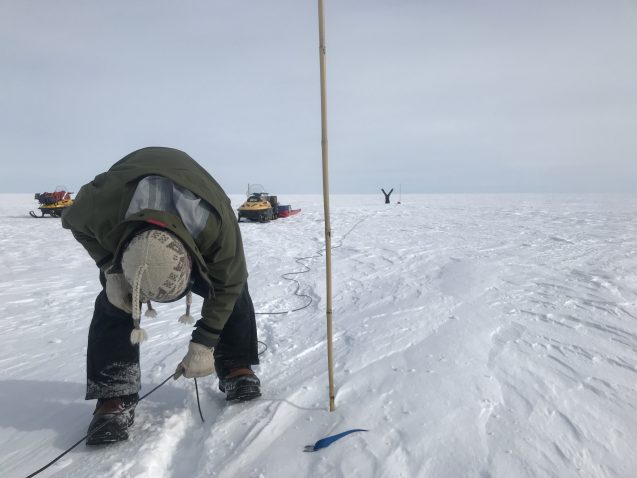 However, the researchers say, if the ice surface were to thin—a distinct possibility as climate warms—the direction of water flow could be reversed. Overlying pressures would decrease, and deeper groundwater could begin welling up toward the ice base. This could further lubricate the base of the ice and increase its forward motion. (The Whillans already moves ice seaward about a meter a day—very rapid for glacial ice.) Furthermore, if deep groundwater flows upward, it could carry up geothermal heat naturally generated in the bedrock; this could further thaw the base of the ice and propel it forward. But if that will happen, and to what extent, is not clear.

“Ultimately, we don’t have great constraints on the permeability of the sediments or how fast the water would flow,” said Gustafson. “Would it make a big difference that would generate a runaway reaction? Or is groundwater a more minor player in the grand scheme of ice flow?” 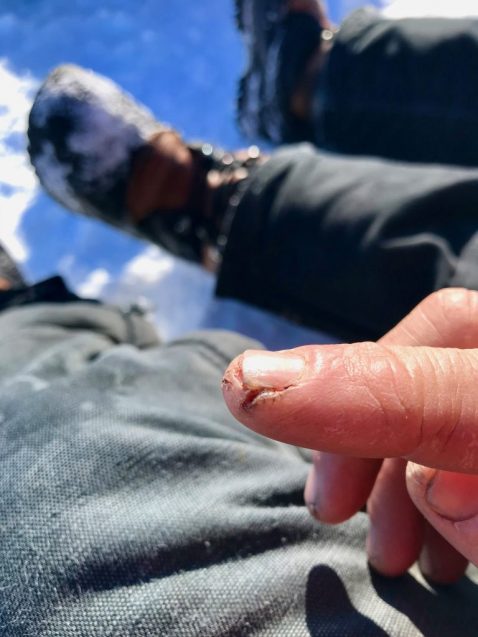 The known presence of microbes in the shallow sediments adds another wrinkle, say the researchers. This basin and others are likely inhabited further down; and if groundwater begins moving upward, it would bring up the dissolved carbon used by these organisms. Lateral groundwater flow would then send some of this carbon to the ocean. This would possibly turn Antarctica into a so-far unconsidered source of carbon in a world already swimming in it. But again, the question is whether this would produce some significant effect, said Gustafon.

The new study is just a start to addressing these questions, say the researchers. “The confirmation of the existence of deep groundwater dynamics has transformed our understanding of ice-stream behavior, and will force modification of subglacial water models,” they write.

The other authors are Helen Fricker of Scripps Institution of Oceanography, J. Paul Winberry of Central Washington University, Ryan Venturelli of Tulane University, and Alexander Michaud of Bigelow Laboratory for Ocean Sciences. Chloe Gustafson is now postdoctoral researcher at Scripps.

You all deserve a lot of thanks for your commitment to your work. Thank you for helping to advance our knowledge, and for working in such challenging conditions.

My friend says Antarctica was stuck by a comet 15,000 years ago. Could the entire continent be a crater which pushed away all the other continents. Is there evidence for this?

Last edited 5 months ago by Franklin Russell
Reply
wpDiscuz
2
0
Would love your thoughts, please comment.x
()
x
| Reply
This website uses cookies as well as similar tools and technologies to understand visitors' experiences. By continuing to use this website, you consent to Columbia University's usage of cookies and similar technologies, in accordance with the Columbia University Website Cookie Notice.Close