“Once-in-a-lifetime” storms, wildfires, and heatwave events are happening more frequently, and areas like Whatcom County—located in the northwest corner of Washington State—have begun to feel the effects already. In 2021, severe flooding displaced 500 county residents, heatwaves killed three people, and thick wildfire smoke blanketed the area, earning the county a failing grade for air quality from the American Lung Association. Between these disasters and others, like mass die-offs of salmon, the region has been facing a spate of climate-related emergencies.

Despite this cascade of disasters and the clear evidence that anthropogenic climate change is happening, there has been very little action to address it at the national scale. President Biden’s climate plan, created in 2021, stalled in the Senate. Most major federal environmental policies were enacted in the 1970s and 1980s or are established by executive orders that can be undone in a later administration. Rather than waiting for national policymakers to take action, tribal and county leaders in Whatcom County are stepping up to protect their communities, creating advisory committees, action plans, climate policies, and water monitoring projects.

Indigenous tribes, particularly the Nooksack Indian Tribe, have been climate action leaders in the region. Oliver Grah, the tribe’s water resources program manager, has been researching how glacier retreat and climate change will impact salmon populations in the Nooksack watershed for over a decade. “The Nooksack people are a fish people—they are a salmon people,” Grah said in an interview with GlacierHub. “They rely on salmon for subsistence, cultural heritage, and commercial purposes.”

Grah explained that only 8% of the Salish Sea salmon runs from the late 1800s return today due to the cumulative impacts of climate change and legacy land use impacts. The Salish Sea includes Puget Sound, the San Juan Islands, and the waters between Vancouver Island and the coast of British Columbia. It borders the traditional homelands of the Nooksack People and Whatcom County in northwest Washington.

In the face of these salmon losses, the Nooksack Indian Tribe has set up monitoring programs for their watershed, “tracking glacier ablation rates, stream discharge, turbidity, and temperature,” according to Grah. This allows them to understand changes occurring in their river and understand how those changes may affect their salmon populations. 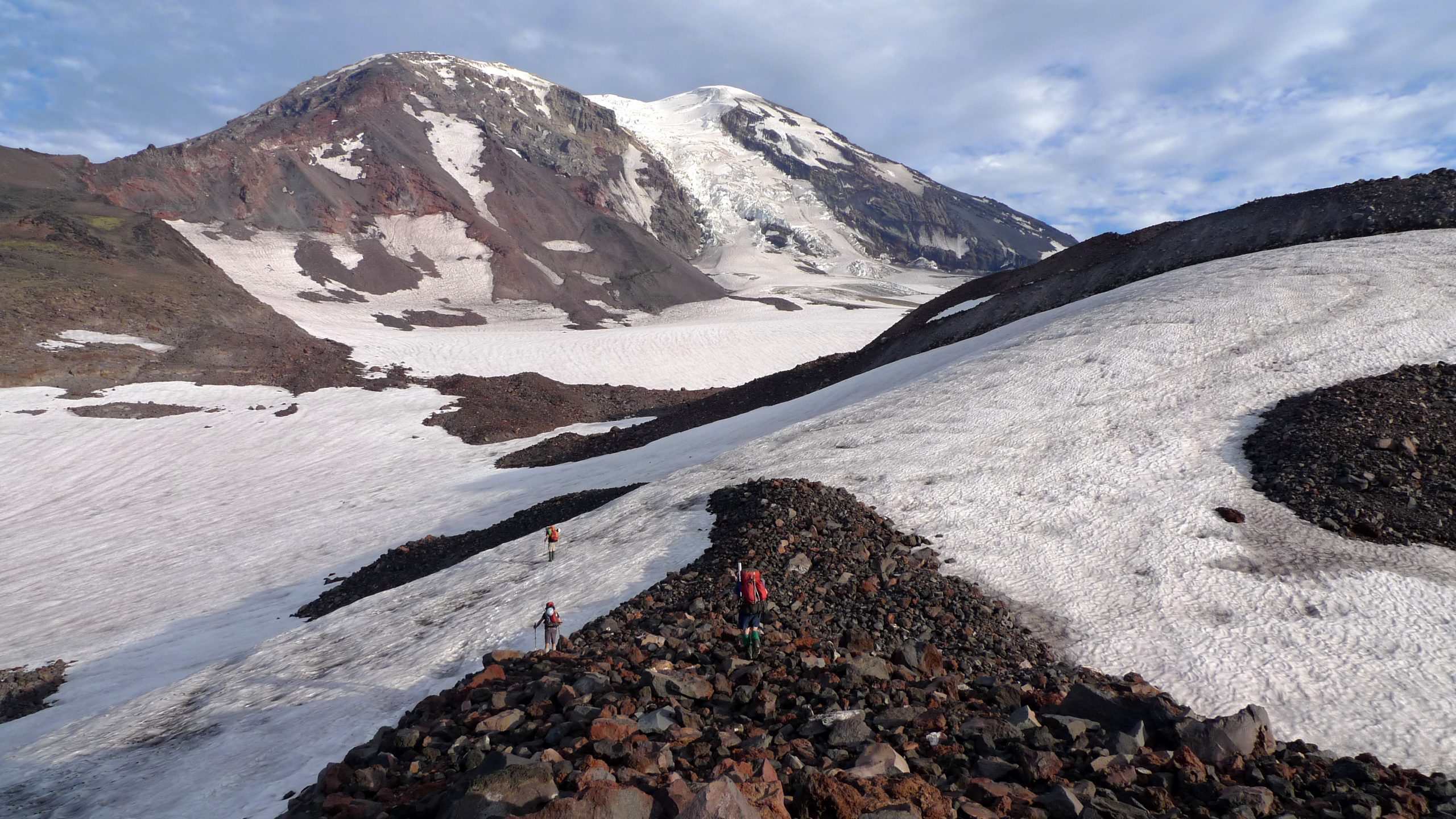 Washington glaciers that feed rivers like the Nooksack River are retreating due to climate change. Source: Patrick Lewis/Flickr

The tribe also published its own Climate Change Adaptation Plan in 2020 in collaboration with the University of Washington Climate Impacts Group and community members. The plan identifies 140 high-priority actions that will increase the climate resilience of “priority natural and cultural resources.” Leaders in the Nooksack Indian Tribe, including Grah, have used their experience with this plan to assist other climate adaptation and action plans in the region, including Whatcom County’s recently published Climate Action Plan.

In 2017, the Whatcom County Council passed Ordinance 2017-080 and established the Climate Impact Advisory Committee (CIAC). The ordinance directed the committee to develop a new Climate Action Plan to replace the old 2007 version, according to Chris Elder, a senior watershed management planner for the county and CIAC’s primary staff member, in an interview with GlacierHub. In the same ordinance, the council set the goal of 100% renewable energy use in Whatcom County and directed the committee to work toward that goal in the Climate Action Plan. There was no timeline or criteria with this goal, leaving CIAC to determine that themselves.

What followed was a four year process of community outreach, drafting, and editing. Committee staff and members like Elder and Ellyn Murphy, the chair of CIAC, worked tirelessly on the plan. Murphy, a retired U.S. Department of Energy research scientist, joined CIAC in 2019. She spearheaded the Community Research Project, where she interviewed over 100 people and organizations in the community to “understand their thoughts and desires in regard to climate action.” This input was then incorporated into the Climate Action Plan, which she co-authored.

The committee presented the Climate Action Plan to the Whatcom County Council last November. The finalized 202-page plan details how climate change is impacting the county, provides goals and steps for reducing emissions, and it indicates how CIAC and a new executive office will implement management strategies to meet these goals. The new executive office, the Office of Climate Action, is “the most important recommendation” the plan makes, according to its co-authors. The plan highlights how glaciers will provide less summer meltwater to county rivers like the Nooksack as they retreat, so alternative ways to increase streamflow will be necessary. It suggests restoration and demonstration projects to increase stream flows and sustain ecosystems and species that rely on these rivers, such as salmon. The Climate Action Plan also establishes a concrete timeline for emissions reductions that previous ordinances failed to do. It calls for a 45% reduction in emissions by 2030 and net zero emissions by 2050.


The Climate Action Plan passed the council early last November by 4-2. Since then, the Climate Impact Advisory Committee has continued in its advisory role to the council and executive office, according to Murphy and Elder. During a meeting on April 14, the committee gave feedback to Whatcom County Councilmember Kaylee Galloway—a former member of CIAC and co-author of the Climate Action Plan—on a draft resolution establishing climate and equity priorities for an upcoming Whatcom County population growth and development plan. They also discussed the hiring process requirements for the senior climate advisor/manager role in the Office of Climate Action, slated to begin soon.

Those who have moved on from CIAC are still fighting for climate policy. Washington State Representative Alex Ramel—another former member of CIAC—has worked in the state legislature on policy focused on transitioning to clean energy, electrifying vehicles, and green hydrogen. During an interview with GlacierHub, he said community-led climate action at a local level is vital for setting the stage for the rest of the state and nation. While it’s still hard work, his experience as climate activist, CIAC member, and state representative has taught him that it’s much easier to get local governments to pass climate policy like this, and those local policies “act as guides for the state level.” He explained that if local communities “can show it works, that it’s cost-effective, and that it’s good for the environment, then it’s a lot easier for others to follow.”

Even though national environmental policy has stalled, the work of leaders like the Nooksack Indian Tribe, CIAC, and Whatcom County Council is paving the way for other communities in the state and nation to follow in the fight against climate change.

um….Mt Adams is in S. WA and has nada to do with the Nooksack River. You mean Mt. Baker?

Thanks for pointing that out! We’ve fixed the wording.