“We all have ghost towns, impermanent places we dream of returning to. Here was Alaska’s.”

Named for Kennicott glacier in the valley below it, the town of McCarthy-Kennecott first grew up along southeastern Alaska’s Copper River in the years after 1900. During that time, this community in the Wrangell Mountains was home to miners seeking work in the Kennecott copper mines nearby. They lived in a settlement called Mill Town. The community faded away in 1938, when the copper miners and their families rode the last train out of the mountains. 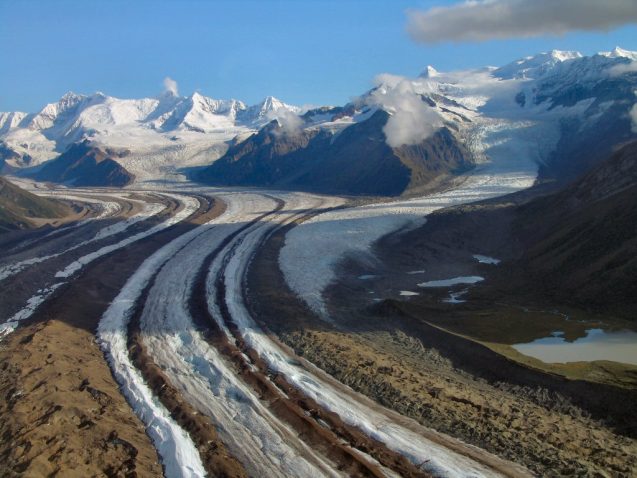 The confluence of the Kennicott and Gates glaciers in the Wrangell Mountains. (National Park Service/Flickr).

In the 1970s and 80s, the area began to draw new settlers and tourists, and the town was revived. Tom Kizzia’s Cold Mountain Path: The Ghost Town Decades of McCarthy-Kennecott covers the years in between, when McCarthy-Kennecott’s denizens were those who sought to live in a hermit kingdom: bush pilots, prospectors, con artists, crackpots, and lovers.

Kizzia’s biography of McCarthy-Kennecott illuminates a place where the passage of the twentieth century was not marked by linear forces of progress or development, but the erratic movement of lives lived among the trees and mountains, forgotten by the outside world. “This book is looking at the people sifting into abandoned landscapes,” Kizzia told GlacierHub. “Who were these people?”

In 1983, working as a reporter for the Anchorage Daily News, Kizzia met Jim Edwards, who had lived in McCarthy, at the foot of the Wrangell Mountains in eastern Alaska, “longer than anyone alive.” Edwards had moved there in 1953, about a decade after the town had been abandoned by the mining enterprises of American settlers, and stayed. His memories of those who remained—the “old-timers…the ones who stayed when everybody left”—as well as those who came next—the students, the hippies, the geologists, the political activists and oil developers — anchor the narrative of Cold Mountain Path as it winds through the years between 1938 and 1983.

Located in the far north and home to most of the glaciers in the United States, Alaska has long been thought of as a final frontier, untouched and remote, in American mythology. Within Alaska, McCarthy-Kennecott was that lost and icy land of legend.

GlacierHub spoke with Kizzia to learn more about this lost land, positioned between shrinking glaciers and industrial development, and the role of humans in the Alaskan landscape. The interview, below, has been edited for length and clarity.

GlacierHub: How would you describe the book to readers?

Tom Kizzia: This is a story of human persistence in a natural wilderness setting, with the tide going out on civilization with the railroad closing, and everyone leaving. There were a few who stayed behind, and I was curious about what they stayed for, and what drew the later settlers who came. This is a story about these settlers trying to put distance between themselves and the rest of the world, about glorious anarchy without government oversight. It’s about an old Alaska that had persisted into the modern day, while the rest of Alaska was urbanizing and responding to the growth of the oil pipeline and boom times of the 70s and 80s.

This book is a chance to look back into the past — the living memory is still there.

GH: Could you tell me about how you conceived of this project?

TK: I consider Cold Mountain Path a local history — a genre that writers often condescend to. From my journalism I’ve learned that exclusion is a big part of crafting a narrative, but local histories tend to meander and tell multiple stories. The longer I worked on this book, the more ambitious I got. It started as a project to provide a short history for a local museum in McCarthy. Writing for the local old-timers was the beginning, but so many people — relatively speaking… they could all fit into one building in New York — have moved into the McCarthy area who don’t know these characters, so I was writing something for them also.

Then over time I was writing for all Alaskans. In the modern world, in modern Alaska, there’s a sense of loss and change. There’s something that was once true about Alaska that is less true now. What’s been lost is not easy to put a finger on, and is easy to sentimentalize. What’s lost is not all great stuff. I think I managed to put some of that in a bottle here and sell it. The response has honestly been surprising. It does seem to have struck a nerve. I hope to convey to the Lower 48 a fascination about Alaska that Alaskans feel. 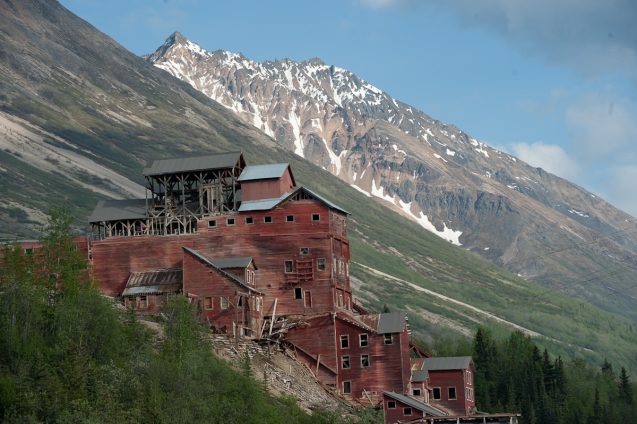 GH: What is some of that fascination?

TK: Imagine you’ve got your living room and suddenly this glacier pushes through one wall and fills up three quarters of the room and you can only work around its edges. That’s what it feels like in this community. The town of McCarthy was built on the apron, right at the toe of the glacier. The mines are up on the mountainside, and the road has to wind up the thread of the glacier just to get there. To get into town, you have to cross a river coming off the glacier. There’s a hidden lake that would flood every year and flush the human bridges away. The glacier dominated the valley.

But things have changed somewhat. Mill Town was built right along the edge of the glacier, and if you looked out, you’d see a wall of ice. Now you go there and you stand in the ruins of Mill Town and you can see for miles and miles and miles because the glacier has dropped so much — not only retreated from the toe but dropped, significantly. You’re looking down at the glacier rather than looking up at it. And it’s all a consequence of that industrial civilization that the Kennecott Mines was a beacon for, that everyone in McCarthy lives in the aftermath of. It’s incredible to be able to see so much change so fast in geological time.

GH: What questions are you most interested in answering with this book?

TK: How can we settle in wilderness, and can we? As a community, as an individual, as families? Certainly some people out there in McCarthy were not interested in these questions, and were more interested in squeezing the landscape for money and moving on. But as for the others — it was interesting to look at their labors in the land. Individuals stand out so clearly in such a sparse landscape.

Moreover, the book asks if there can be a human community role within the Alaskan landscape, one that is different from the ideal of the national parks in the Lower 48, where Indigenous populations and other settler populations were pushed out to create an early twentieth century version of pure nature. The idea of natural preservation in Alaska was much more complex, and the McCarthy community was able to insert itself into that conversation. Much of this book is asking, ‘What are we preserving here?’

GH: How does that last question relate to the book’s motif of ghost towns?

TK: The ghost town is a metaphor for the frontier. We tend to look a lot at the boom side of the frontier; the opportunity for making a fortune. But the roadkill that gets left behind only gets a nostalgic glance at best. I wanted to see if there was an epic that could be written about the decline, rather than just the boom, of the frontier. In McCarthy, we can look at Kennecott Copper as an avatar for Big Oil and the era we’re in today, which is also starting to reach its decline period, just as Kennecott did. The notion that Alaska itself could become a ghost town just like Kennecott, and what happens before that kind of fall, is what gives rise to the question, ‘What are we preserving here.’