As climate change increasingly threatens glaciers and ice, glacier-saving campaigns led by environmentalists, governments, organizations, and communities are popping up around the world. A number of different methods have been attempted, including using insulating blankets to prevent melt, creating artificial glaciers, and implementing glacier protection laws. However, as these campaigns become more popular, communities and researchers — including the authors of a chapter in the new book, Ice Humanities — have begun to question the motives, framings, and effectiveness of these campaigns, leading to some doubts as to their helpfulness in addressing climate change.

The chapter focuses on five key examples of glacier-saving campaigns, three of which use geoengineering projects to reduce ice loss. In Switzerland, a group of residents has attempted to slow ice loss by putting insulating blankets on the Rhône Glacier, a vital source of freshwater and tourism revenue in the country. Ski resorts in Europe have covered glaciers and snow with blankets and tarp, as well as producing artificial snow with snow machines. Meanwhile in Ladakh, India, engineers are building artificial glaciers and ice stupas to supplement water supplies for farming and drinking. 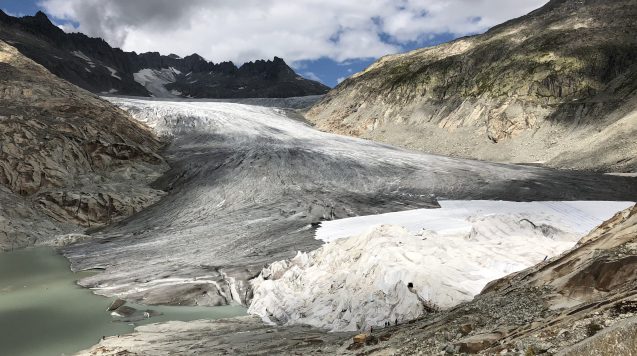 In the two other examples from the chapter, communities and nations took a different strategy to saving ice, working to secure legal and political protections for their glaciers. In 2010, lawmakers in Argentina passed the world’s first national glacier protection law, which prohibits mining, industrial activities, and other harmful activities near glaciers in the country. In India, two glaciers were granted “legal personhood” by the Uttarakhand High Court in 2017, allowing citizens to sue on behalf of glaciers that have sustained harms.

These five examples of glacier-saving campaigns are the focus of a chapter in a recently published book, Ice Humanities. Mark Carey, an environmental historian at the University of Oregon and lead author of the chapter, has been researching the societal impacts of glacier retreat and ice for over two decades. After seeing glaciers transform into a climate icon and observing the increase in glacier-saving campaigns often led by groups outside the affected communities, he began to wonder why certain stakeholders emphasize saving glaciers more than others, for what purpose, and with what implications for communities and the larger climate movement.

The research gained steam during the summer of 2019, when two undergraduate researchers — Jordan Barton, now a law student at University of California Berkeley, and Sam Flanzer, now a current graduate student at George Washington University —started in Carey’s research lab. Their initial research on Greenland icebergs shifted to glacier-saving campaigns when the campaigns started popping up across their different individual research areas. According to Barton, the media coverage followed the same pattern: a “doom and gloom lament for lost ice,” followed by a “focus on the new [glacier-saving] innovation” often led by outsiders. However, missing from these stories was any sort of focus on “the communities that actually lived with these melting glaciers,” she notes.

With this gap in mind, the researchers began examining different glacier-saving campaigns through an ice humanities lens — focusing on the glacier representations, stories and values that are driving policy, engineering, and management strategies, rather than just the strategies themselves. Carey says that they honed in on the five key examples highlighted in the chapter, using the ice humanities approach to understand both “the social actors and entities given authority to resolve the problem of ice loss and climate change” as well as the “invisible actors and the implications for mountain landscapes and residents.” 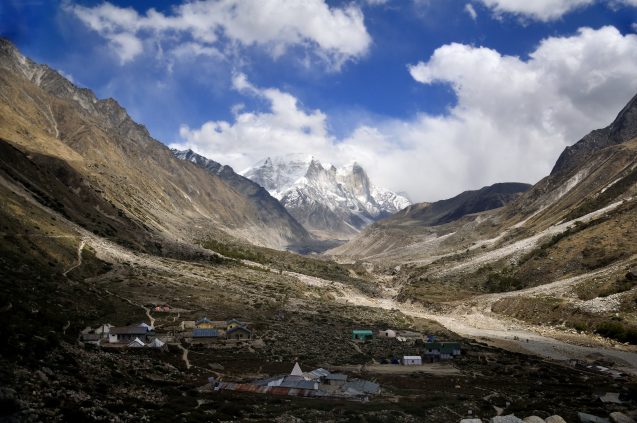 The Gangotri Glacier in the Indian state of Uttarakhand is a traditional Hindu pilgrimage site that is disappearing due to climate change. Along with the Yamunotri Glacier, it is one of the glaciers granted legal personhood in 2017. Photo: Amit Rawat/Flickr

Through this research, the authors found that most of the coverage of these campaigns primarily focuses on the strategies and creators of the campaign but not the actual result — whether or not it really works to reduce glacier loss. Coverage also often failed to address the communities most affected by the melting ice, instead focusing more on industrial effects and tourism. As the authors observe in the chapter, “the act of offering a solution to ice loss seems more important than whether that solution works.”

Barton emphasizes that the chapter is not criticizing glacier-saving campaigns but rather recognizing that “how we talk and think about the campaigns shapes how we frame the underlying problems of climate change and systemic inequalities.” The campaigns can be useful and impactful to individual glaciers, communities, and industries, but they do not address the root problem of climate change. Focusing too heavily on “a Band-Aid over the symptoms of those problems leads to missing a vital bigger picture,” she explains.

As ice continues to shrink and retreat worldwide, policymakers and journalists should question the underlying assumption that campaigns to save ice are inherently a good thing. Instead, they should evaluate whether the campaign addresses the root problem, who is leading it, and who benefits from it to identify schemes that act more as a temporary fix than a long-term solution. As the climate situation becomes more dire, community-led and long-term projects focused on mitigating the current and future effects of ice loss are vital to saving mountain communities and alpine ecosystems.