Ice cave facilities and ski resorts in Switzerland are covering their glaciers with blankets, known as geotextiles, to slow melting in a warming world. Although geotextiles have proven to be locally effective at slowing glacier melt, they have been criticized for being an expensive, unscalable, and inequitable display of the various ways communities are responding to climate change. 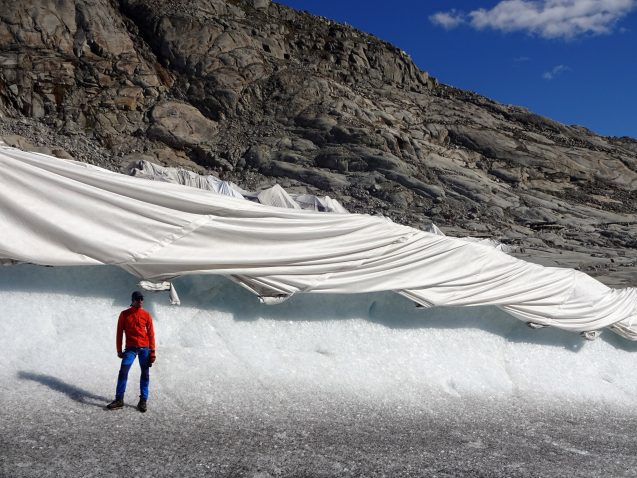 A researcher stands in front of the Rhone Glacier covered in geotextiles that protect it from accelerated melting. Source: Matthias Huss

Made out of synthetic material, geotextiles cover parts of a glacier to insulate thick winter snow during the warmer summer months by reflecting energy emitted by the sun. According to a study published in the journal Cold Regions Science and Technology earlier this year, the technique can slow ice melting by 50 percent, which would allow longer tourist seasons and postpone the eventual demise of the glaciers, which the tourism industry relies on. With this effectiveness widely recognized, the area in the Swiss Alps covered by geotextiles has doubled in the last seven years. Implementing geotextiles is also fairly simple, requiring less infrastructure, energy and water compared to other methods to reduce melting, particularly artificial snow production.

But geotextiles have their limitations, admitted Matthias Huss, a glaciologist at the University of Zurich and co-author of the study, during an interview with GlacierHub. When it decomposes, plastic can pollute waterways and accumulate downstream, harming flora and fauna. If the use of geotextiles were expanded to cover large areas, these impacts could be detrimental to local ecosystems, the study found. Geotextiles also aren’t cheap. Covering Switzerland’s 1,000 largest glaciers each year would cost about $1.5 billion, according to the study.

Although geotextiles have proven to be an effective local technique in parts of Switzerland, they have been faced with criticism. Currently, geotextiles cover several square kilometers of the Rhône Glacier, home to a popular ice cave in Switzerland. In a recent exhibit titled “Shroud,” two photographers, Simon Norfolk and Klaus Thymann, lit up the geotextiles on this glacier to produce a series of photographs that examine the futility of covering these natural phenomena in blankets. The effect is a haunting and unsettling display of a human attempt to save glaciers from what may seem inevitable. In one photograph, a geotextile is molded into a pointed ice formation, creating the illusion of a hooded, looming villain — the exhibit’s namesake.

The practice of covering glaciers with geotextiles also highlights the financial disparities that allow one country to slow the effects of climate change, but not another. In the Himalayas, for example, the use of geotextiles would be impractical because glaciers are located at much higher elevations than those in the European Alps, Miriam Jackson, the program coordinator at the Cryosphere Initiative at The International Center for Integrated Mountain Development, told GlacierHub in an interview. Covering glaciers with geotextiles would be a huge undertaking, requiring a lot of manpower and financial resources which are already limited in those communities, she added. 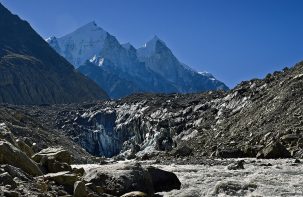 Gomukh, the end of the Gangotri Glacier, which is one of the largest glaciers in the Himalayas, requires a long trek to reach, located at 13,200 feet above sea level. Source: Pranab basak/Wikimedia Commons

Geotextiles are an example of adaptation — an attempt to make the impacts of climate change less severe. But while commitments to reduce emissions continue to fall short, living with and adjusting to the effects of climate change will become increasingly necessary for countries without an abundance of resources, Jackson explained. “In the future, we are going to see more adaptation rather than mitigation. People are going to have to adapt.”

Despite the limitations of geotextiles, Huss understands why they are becoming increasingly popular. “The local community understands completely well what this technique is good for. They are just trying to save their businesses and save the little block of ice they have left. Geotextiles were never meant to save all the world’s glaciers,” he said. Communicating the distinction between small-scale and large-scale solutions to glacier retreat presents a challenge for faraway audiences and often gets confused in the media, he added. “People will read an article about glacier blankets and think this is all that needs to be done to preserve glaciers. But that’s not the case. Glacier blankets are not scalable. A scalable solution is cutting greenhouse gas emissions.”

Geotextiles symbolize that climate change is a battle too big to fight alone, Huss concluded. “It would be more economic to put all the money that is invested in geotextiles to reduce greenhouse gas emissions, which would have a broader impact globally. It is very clear that climate change can only be solved as a global community.”