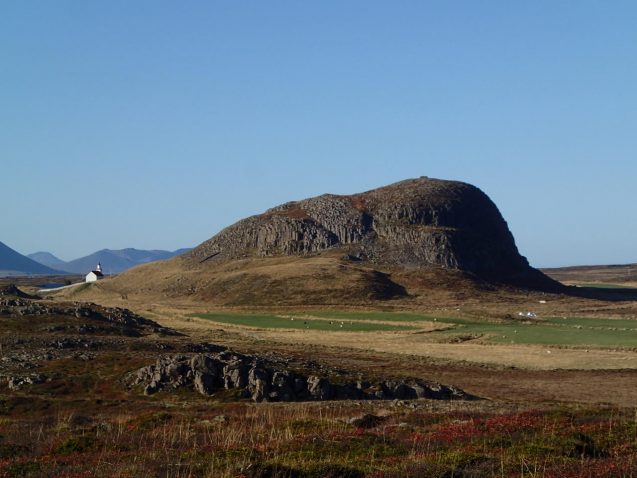 Helgafell, the Holy Mountain, an ancient volcanic plug in west Iceland. Thorolf, the man who named the hill, believed that he would go into it when he died. (Courtesy of Nancy Marie Brown)

American writer Nancy Marie Brown has published several books on Icelandic culture. In her newest book, Looking for the Hidden Folk, she dives into ethnography, drawing upon Icelandic narratives of the hidden world of elves and trolls and her own lived experience.

The Norse and Celtic settlers of Iceland in the 9th century came to an uninhabited country without any narratives or landmarks. Soon, however, the land was saturated with stories. Stones, hills, glaciers, volcanos, and mountains were assumed to carry hidden beings with an agency of their own, speaking to humans and meddling in their affairs. Many narratives provided in the sagas and later folklore emphasized the tragic consequences that would ensue if humans failed to pay attention to such forces. Might such narratives, Brown wonders, be relevant today, at a time of radical environmental change?

Brown details many stories of hidden beings in the land and their encounters with (other) Icelanders. Some of these stories are presented in public media, politics, and court rooms. Hidden people clearly have a say on many issues, including road construction. Sometimes the discovery of elf habitats has led a national infrastructure agency to reroute a planned road. “Enchanted spots,” Brown points out, “are found on farms all over Iceland.” How, she wonders, should one make sense of this?

Looking for the Hidden Folk is a sweeping and moving journey — through myth and theory, language, and comparative literature — into the world of wonder and enchantment. It offers a compelling and surprising case for the recognition of forces and beings not necessarily “seen” in everyday life but nevertheless somehow sensed. Brown’s evidence is skillfully drawn from several fields, including physiology (evidence on the human sense of vision), physics (notions of gravity and “empty” space), and anthropology (comparative understanding of magic and materiality). In particular, she draws upon the knowledge of anthropologist Tim Ingold. A stone, she says, quoting Ingold, “cannot be understood apart from the manifold ways in which it is engaged in the currents of the lifeworld.” Often these currents are packed with mesmerism. “Why,” Brown asks, “should disbelief be our default? Why should we deride our sense of wonder?” 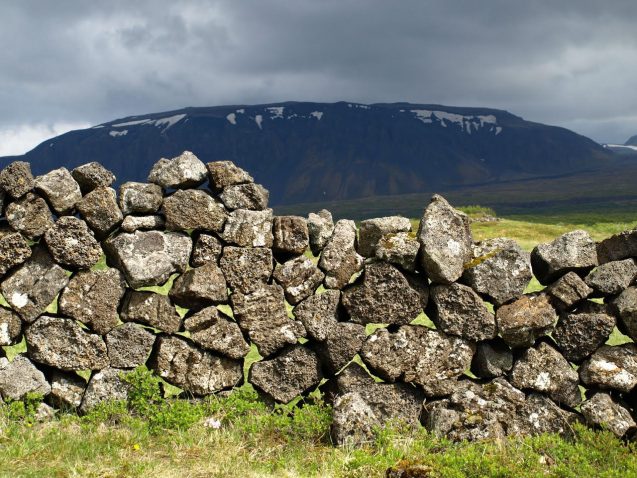 The homefield wall of an abandoned farm at Thingvellir National Park, Iceland. To reach Thingvellir, the Althing, northerners had to travel between big mountains, imagining the elf queen and her hunters would sweep down from the hills. (Courtesy of Nancy Marie Brown)

Iceland is often associated with fire and ice. Indeed, Iceland’s volcanic geology is hyperactive, providing a fertile ground for all kinds of speculations about the otherworld. Brown’s narrative dwells on the magic of glaciers, in particular that of Snaefellsjökull. This relatively small “glacier” is often considered a holy mountain, attracting a stream of visitors. Not only is it a mystery to new-age enthusiasts, it is also a geologic puzzle, according to geologist Haraldur Sigurðsson, who was interviewed by Brown. Because the Snaefellsjökull volcanic zone runs perpendicular to Iceland’s primary volcanic zones, Sigurðsson said it “creates a real paradox for geologists … it does not follow the simple paradigm of plate tectonics.” Brown made one attempt to climb the glacier but had to give up due to heavy storm and rain. Each of her successive trips to Iceland, she says, “was made or marred by catching sight of it or failing to.”

Snaefellsjökull is a key site in the novel Christianity at Glacier, written by Iceland’s Nobel laureate Halldor Laxness. When it was published in 1968, it was often considered superficial, playing with silly magic. Brown had read it before attempting to climb the glacier and didn’t make much of it. When she returned home, however, she reread the book and was “amused (or abashed) to find [her] obsession with Snaefellsjokull so well explained.” She said that it beautifully expressed “my feeling that the mountain was sentient, that it was watching me, even when I could not see it.” Brown admits that she returned “a little abstracted,” “a little odd, a little off-balance. It’s not always easy returning to real life.” Similarly, one of the characters in the novel (the emissary Umbi who was sent to examine Christian conduct near the glacier) comments: “I took to my heels with my laces flapping about my ankles, and I ran as hard as I could back the way I had come. I was hoping that I would find the main road again.” Brown, however, offers a meaningful “main road” back with long-term benefits. For her, much like another character in the novel (reverend/philosopher Jón Prímus), the oddities of the world of magic melted together into a seamless whole, like a glacier on top of an active volcano. 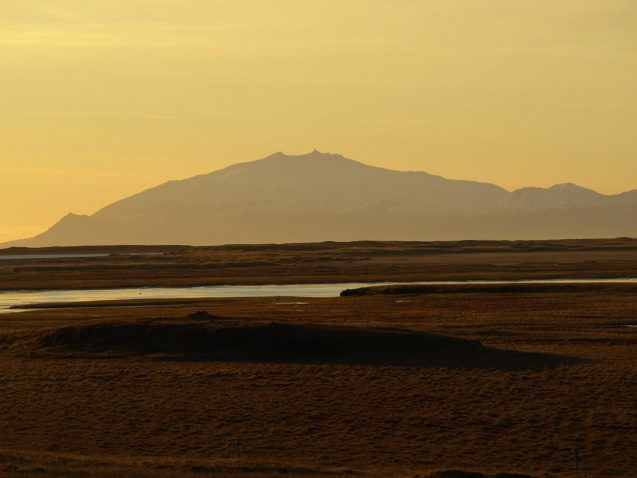 The glacier Snaefellsjökull, radiating with energy and mystique, in the evening sun. (Courtesy of Nancy Marie Brown)

In the 1980s and 1990s, the magic of Christianity at Glacier began to make sense. For some (including the present author), the key plot of the novel fleshed out some of the problems of postmodernity, how to separate fact and fiction, novel and ethnography. “And so, we come full circle,” Brown says, to Icelandic seers who speak “to elves who live in rocks, and whose place within this company of artists, writers, philosophers, and anthropologists all pondering words and worlds, gods and stones, I feel is assured, and whose vision, I am convinced, can provide a way for us all to press on.”

Some elf stories are fables about human-animal relations, warnings about the dangers of the Anthropocene, calling for ethics of modesty and care. More science and more technology, Brown concludes, are not going to get us out of the environmental crisis. Amalgamations of modern and ancient views allowing for enchantment might show us the way. 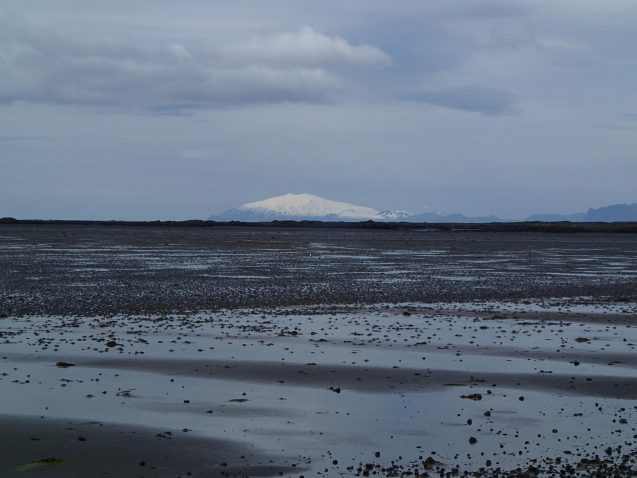 Looking for the Hidden Folk: How Iceland’s Elves Can Save the Earth, by Nancy Marie Brown, was published in October 2022.