Report from the Field: The Tro-Tro - An Essential Mode of Transport in Accra, Ghana

The following is a guest blog, authored by Victoria Okoye, a Millennium Cities Initiative researcher, who has been investigating urban transportation issues in Accra, Ghana.

Researching urban transport in Accra, Ghana, this summer on behalf of the Accra Metropolitan Assembly and the Millennium Cities Initiative, I learned a lot about the city’s most well-known, loved, hated, but essential modes of transport. Tro-tros, as they are called here, are minibuses that seat 10 to 19 persons and operate along set routes inside the city.(1) They transport 70% of Accra residents traveling to work and shopping, making it the most widely used form of transportation.(2) One of Accra's many tro-tros.

Tro-tro operations are concentrated on Greater Accra’s major roadways, and the minibuses provide service to and from Accra’s busiest points. The most frequently used routes within Accra include “Circle” (destined for Kwame Nkrumah Circle, the heart of Accra’s central business district and the location of a major tro-tro depot and street market), “37” (to 37 Military Hospital, located in northeastern Accra, an area with a tro-tro station, produce market and shopping center) and “Accra” (bound for Tema Station in Accra, the bus and tro-tro depot that serves as the route’s final destination).

Riding the tro-tro
These days, the tro-tro has become my main form of transport, primarily for its affordability and the opportunity to discover and venture to all parts of the city. That said, riding the tro-tro requires a mix of skill, good luck and local knowledge of the city’s landmarks. The first challenge is identifying the right bus: few tro-tros display their destinations with signboards at the dashboard window. More commonly, the tro-tro mate (the driver’s assistant) leans out from the right side of the bus as it approaches a stop and announces the bus’s destination/route both verbally and using hand signals. For example, making a circle with one’s forefinger pointed down to the ground is a colloquial way of indicating the “Circle” route, while pointing one’s finger up in the air and motioning upward indicates “Accra” (to central Tema Station). The tro-tro's mate announces a route.

If I’m lucky, I won’t wait too long before a bus heading toward my destination arrives. Now the challenge lies in competing with other would-be passengers for a spot in the minibus. Boarding can require physically competing with others to land a seat (usually just a healthy amount of nudging, but during peak travel times, competition can be more fierce). Some people have developed very successful strategies. For example, some run along the bus as it approaches, so that once it comes to a stop, they are first to board. However, even if I am the first in what is a very informal queue to board the tro-tro, someone more aggressive or more impatient might still nudge me out of the way to get his or her own seat. On some occasions, young, able-bodied people will even enter the vehicle through one of its windows to circumvent the queue at the door.

Once seated in the tro-tro and en route, the mate may continue calling out the destination between stops, in an attempt to fill any open spots on the minibus. The mate is also in charge of collecting fares, informing the driver of passengers’ upcoming stops and opening the door at each one. Fares are priced according to the length of distance traveled. For example, a trip from Legon, where the University of Ghana’s main campus is located, to destination 37 costs 30 pesewas (21 cents), while a trip from Legon all the way to Circle costs 50 pesewas (35 cents). More often than not, I alight from the bus somewhere along the route. Being familiar with the route and bus stops before boarding is key, as these are never displayed on the bus; rather, everyone just seems to know them through years of riding. During peak times, some tro-tros may adopt alternative routes in order to avoid intense traffic, so it is important to ask the driver or mate whether they will use your destination route before you board. As my tro-tro speeds, chugs or plods along the route (depending on the vehicle’s quality), the mate announces each stop. When mine is next, I simply have to call out, “Bus stop!” and I’m dropped off at that stop. Not all bad, but not all good
In Accra, the tro-tro serves as the backbone of urban transport operations. Operated and regulated through unions, tro-tros have emerged in recent years as the major private sector contributor to transport service provision within the city.

I’ve experienced a number of positive attributes of tro-tros while riding them in Accra. I’ve grown acquainted with the city, learned its historical and popular landmarks, and observed its landscape and urban planning challenges. The tro-tros, given they are a more informal form of transport, are also incredibly flexible – although they won’t divert from their routes, drivers are sometimes willing to allow passengers to alight between formal stops, as opposed to the strict drop-off locations of traditional bus services. In a city where pedestrian access can be quite limited, this has been incredibly useful. Moreover, in my research on urban transport and the pilot bus-rapid transit (BRT) in Accra, I learned that the tro-tro is by far the most disability-friendly form of mass transit. Finally, the tro-tro operations seem to be built on social cohesion and human interaction – the dialogue between the mates, the drivers and passengers is the basis for efficient operation.

At the same time, there are distinct challenges to tro-tro service. One major obstacle has been that much of the communications and interaction within the tro-tro take place in local languages (normally Twi, but also possibly Ga or Hausa). Also, vehicle quality and roadworthiness is a continuing issue. Tro-tros are typically imported secondhand minibuses, and some vehicles have apparently been used for years before arriving in Ghana. Despite their age and dilapidated state, many of these vehicles are still certified, licensed and registered as roadworthy. The insides of such vehicles are often stripped, to economize space and maximize seating, rather than promote passenger comfort. Driving through the city, I’ve seen some broken-down tro-tros along the road, and these aged vehicles’ exhaust fumes contribute to air pollution and reduced air quality. Tro-tro drivers can also be quite aggressive as they maneuver the streets and traffic, resulting in road accidents. Regulations that would promote improved driving and vehicle quality are currently within the domain of the tro-tro unions and can be quite lax.

The Government of Ghana, through its Ghana Urban Transport Project, seeks to reform and address inefficiencies within the tro-tro sector, in line with improving overall urban passenger transport services. The Urban Transport Project is a five-year (2008–2012), US $95 million investment aimed at reforming road-based mass transit service delivery and infrastructure in Ghana’s urban areas. In short, it aims to reform institutions within the transport sector (including regulations regarding tro-tro operations); put in place stronger traffic engineering, management and safety practices; construct a bus-rapid transit (BRT) project to be piloted in the cities of Accra and Kumasi; and integrate transport and urban development planning and policy.

In spite of its challenges, a ride in a tro-tro is a must for any visitor to Accra who wishes to experience the city’s real local ambience. Although it’s still unclear what impact the Urban Transport Project’s reforms can and will have on improving tro-tro service quality, I’m positive that they will be significant. In the meantime, I’m making the most of this experience, including all the bumps along the way. Passengers alight from a tro-tro.

Footnotes:
(1) The word “tro tro” originates from the initial fares charged by the buses (one “tro” per trip). The phrase is also associated with this form of transport as an affordable means of travel for people of all economic means. Although the name of the minibus is a local one, similar minibuses are a major form of transport in other large African cities (with their own local names, such as danfos in Lagos, Nigeria, and matatus in Nairobi, Kenya).
(2) The World Bank’s Consultative Citizen’s Report Card for the City of Accra (2010) found that 70 percent of Accra’s residents generally use tro-tros to commute to work or shopping; 11 percent rely on walking, 10 percent rely on private car and eight percent rely on taxi service. 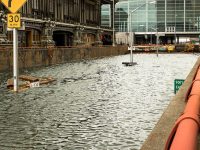 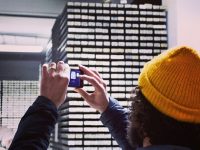 Presenting Climate LIVE K12: RSVP for Winter 2022 and Spring 2023 Sessions
Subscribe
Login
0 Comments
Inline Feedbacks
View all comments
wpDiscuz
0
0
Would love your thoughts, please comment.x
()
x
| Reply
This website uses cookies as well as similar tools and technologies to understand visitors' experiences. By continuing to use this website, you consent to Columbia University's usage of cookies and similar technologies, in accordance with the Columbia University Website Cookie Notice.Close