The Palmer Long Term Ecological Research (PAL-TER) is a research initiative to collect annual data about West Antarctica. Since its inception in 1991, scientists have gained significant insight into the inner workings of the Antarctic ecosystem. After 21 years of data collection, the members of PAL-LTER, including Richard A. Iannuzzi, Hugh W. Ducklow, and Douglas G. Martinson of the Lamont Doherty Earth Observatory, have released a paper detailing their conclusions. They have found that the wellbeing of the West Antarctic ecosystem is strongly correlated to climate, and that the ongoing climate change will have a profoundly adverse effect on the West Antarctic.

According to the study, the West Antarctic has been undergoing dramatic warming accompanied by decreased sea ice, quickened glacial retreat, and melting ice sheets. The authors posit, “As life histories of most polar organisms are attuned to ice seasonality, recent warming and declines in sea ice have been associated with changes at key trophic levels of the food web.” Furthermore, the study asserts that the shifts start first with phytoplankton biomass – the very bottom of the food chain – then subsequently affect krill, which dine on plankton, and then Adélie penguins – whose diets consist almost exclusively of krill. Other top predators, like whales and seals, are also affected, as krill is the intermediary between the top and bottom of the food chain. Krill such as this one are the primary source of food for most apex predators in the West Antarctic. Photo: Wikimedia Commons

The climbing global temperature decreases the occurrence of negative SAM, and increases the occurrence of positive SAM, which is inauspicious to plankton bloom. Consequently, krill decline as their food source dwindles.  As plankton and krill populations suffer due to the melting sea ice and warm winds brought by the positive SAM, so will animals higher up the food chain. The study suggests, “A decline in Antarctic krill will negatively impact higher trophic levels dependent on Antarctic krill including penguins, flighted sea birds, seals and whales, most notably their foraging effort and reproductive output.” Predator decline has already been noted around Palmer Station: Adélie penguins have declined in the past three decades from krill shortages. The loss of apex predators and producers alike could mean a very different ecosystem in the coming years.

Antarctica is not the only environment that is facing pronounced ecological change as a result of a rapidly warming climate. According to a recent study titled Ecological Responses to Climate Change, tropical ocean ecosystems, too, are changing. The study states, “Coral reefs have undergone global mass bleaching events whenever sea temperatures have exceeded long-term summer averages by more than 1.0°C for several weeks. Six periods of mass coral bleaching have occurred since 1979 and the incidence of mass coral bleaching is increasing in both frequency and intensity. The most severe period occurred in 1998, in which an estimated 16% of the world’s reef-building corals died. The impact of thermal stress on reefs can be dramatic, with the almost total removal of corals in some instances.” Coral is an ecological staple, acting as When water is too warm, coral expels the algae living in its tissue, causing it to turn completely white – a process known as coral bleaching. Photo: Wikimedia Commons

a habitat for a large variety of organisms, including sponges, mollusks, oysters, crustaceans, echinoderms and cnidarians, according to the Environmental Protection Agency. As a result, coral loss can be devastating to tropical ecosystems, with many creatures losing their source of shelter and food. The changing climate means more coral bleaching, and subsequently more biodiversity loss.

From one extreme to the other, ecosystems are inseparably linked to climate; as one changes, the other will change as well, whether Antarctic or tropic. With global temperatures expected to rise further, sea ice expected to melt faster, and coral expected to bleach quicker, the future of ecological relations is uncertain.

Allegra DePasquale is a student at the Macaulay Honors College and an intern at the Earth Institute Center for Environmental Sustainability. She is majoring in Political Science with an emphasis on environmental policy. 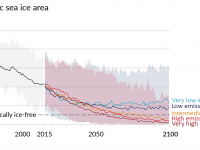 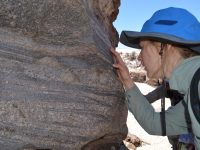