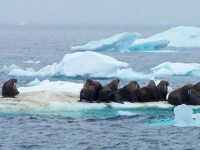 FROM THE FIELD
TRACES of Change in the Arctic

Scouring Arctic for Traces of Fukushima and Cosmic Rays The Healy is doing a lot more ice breaking now that we have moved into the Arctic ice cap. Photo: Tim Kenna

Sounds like the basis for a great scifi thriller… “scientists scour Arctic, hunting for traces of nuclear fallout and ejections from cosmic ray impacts.” In reality this thriller theme is the actual core of the GEOTRACES mission. Let’s break it apart a bit to better understand it.

Fukushima and Other Nuclear Fallout

The project Tim is focused on is the human introduced (anthropogenic) radionuclides that are released into the environment as a result of nuclear industrial activities, things like weapons production and testing, as well as nuclear power generation and fuel reprocessing. This includes isotopes of plutonium, neptunium, cesium, strontium, iodine and uranium that are not normally found in the environment. The major sources of these nuclides include fallout from atmospheric weapons testing and liquid releases from European nuclear fuel reprocessing.

The workspace set aside for the radionuclides work. If you have ever done “Where’s Waldo?” see if you can find Tim’s spot. Photo: Tim Kenna

One goal of our project is to determine the budgets (overall input and export) of these contaminants. Samples collected along our cruise track combined with those collected on the European GEOTRACES cruise taking place on the Polarstern will allow us to do this.

We are also collecting samples to evaluate for the presence and distribution of contamination related to Fukushima. Two cesium isotopes were released into the environment as a result of Fukushima; Cesium 137, with a half-life of 30 years, and Cesium 134, with a much shorter half life of two years, so little is left from past nuclear testing. Fallout from Fukushima is an excellent tracer to help us learn more about ocean circulation and transport models. Paul Aguilar, part of the Beryllium 7 sampling team, signals thumbs up to the winch operator on a hydrocast. Hand signals are a major method of communication between ship operators and scientists and crew on deck. Photo: Tim Kenna

Another part of the GEOTRACES team is measuring Beryllium-7 (Be-7), a cosmogenic nuclide that is created when a cosmic ray breaks apart heavier atoms into smaller atoms. Be-7 is a short-lived isotope with a half-life of 53 days. We can use this short half-life to tell us something about water circulation and exchange rates under the ice. Currently the team is measuring Be-7 in the marginal ice zone. Once the ship reaches a section of ice that is large and thick enough for the scientists to work on, we will drill through to measure under the ice as well.

Yes We Have a Bubble Room! Jess and Sarah work in the heavily protected bubble room to keep their samples from being contaminated by elements on the ship. Photo: Tim Kenna

When we said “trace” elements we weren’t kidding! Jess and Sara are part of the team working on contamination-prone trace elements. Their work is done in an inflatable bubble to keep it ultra clean. The bubble is inflated using high-efficiency particulate arresting (HEPA) filtered blowers. Trying to measure very small trace elements without contamination is extremely difficult, and it is a testament to their skills that they can measure elements such as zinc and iron, which are extremely low in seawater but very common on the ship (rust never sleeps!). Getting an accurate measure means not picking up any of that ship input. Sampling in and among the ice floes can mean equipment wires get caught on the ice, as happened here. It can be tricky to untangle caught wires to free equipment. Photo: Tim Kenna

In order to run all these great experiments, we need samples, so we are collecting and filtering water at as many stations as we can. Sampling in the ice pack is very different than sampling in an open ocean. Station locations must be very carefully selected to reduce the risks of the equipment getting entangled in the ice and ending up either crushed or ripped away. Even in less dense ice, we caught the hydrowire on an ice floe (above).

Everything is supersized on a ship like the Healy, from the large metal A-frame support that is used to lower collection equipment (yellow/buff colored) to the circular metal rosette which is filled with niskin collection bottles for gathering water samples. The deployment of a rosette for sampling is called a “hydrocast.” This allow scientists to collect water at a variety of depths. The images below are from a few days ago, before we hit denser pack ice.

You can see if you look carefully at the photos that these bottles have snapped closed, sealing the water sample inside. When deployed the bottles are opened at both ends so water freely flows through as the rosette descends to the sample depth. Photo: Tim Kenna

The rosettes can hold up to 36 bottles. Each bottle can be programmed to snap closed at a specific depth, so in one deployment, water can be collected at up to 36 different depths. This is extremely valuable for teasing apart circulation through tracking small particles entrained in the water column at different depths. The water collected in these sampling bottles will be used for a range of studies. The rosette takes several people to stabilize and guide it over the side of the ship, and the A frame is several stories high. Photo: Tim Kenna

This sequence of the retrieval of this hydrocast involves four people to collect and stabilize the rosette, as well as the personnel up above operating the winch to lower the equipment, and several people in a console monitor verifying both the depth of the rosette and that the cable on the equipment is sending up the necessary data. Operating the equipment on a ship is labor intensive, but each deployment retrieves enough sample material for not only the team on board the Healy, but for colleagues and partners waiting back at their home institutions for samples.

Margie Turrin is blogging for Tim Kenna, who is reporting from the field as part of the Arctic GEOTRACES, a National Science Foundation-funded project.

For more on the GEOTRACES program, visit the website here.