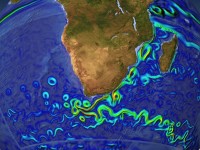 FROM THE FIELD
When Oceans Leak Jeroen van der Lubbe examines the first sediment core of Expedition 361 brought up by the team aboard the JOIDES Resolution. Photo: Sidney Hemming

Read Sidney Hemming’s first post to learn more about the goals of her two-month research cruise off southern Africa and its focus on the Agulhas Current and collecting climate records for the past 5 million years.

We have our first core! The team pulled up 254.1 meters of sediment from the Natal Valley site off southern Africa, near the start of the Agulhas Current. We think we have about 6 million years of history in that core that should be able to tell us details about the how the region’s currents and climate changed through time.

The whole core (IODP 361 U1474A) is actually several cores. Each is 9.5 meters long and is cut into sections that are 1.5 meters for analysis and storage. The top of each of those cores was jostled by the coring process, but we hope we will be able to fill the gaps with cores from the two other holes we plan to drill at the Natal Valley site. It has become standard in the International Ocean Discovery Program’s (IODP) paleoceanography drilling to core three holes, deliberately offsetting the gaps, in order to have a full record from the site. This presents a challenge for our stratigraphic correlators, Steve Barker and Chris Charles, but they are definitely up for it. They spent the time in port and during transit working hard to master the software.  I understand it is powerful, but not easy to work with (a sign on one of their computers says: “exercise extreme patience”). Seeing our first core come up was very exciting. As it was happening, we were getting age estimates in real time from the paleontologists, and not too much later from the paleomagnetists. The paleomagnetic measurements appear robust, and they show several magnetic reversals, so we can use the known magnetic reversal time scale to help date each part of the core. The foraminifera and calcareous nannofossil species changes in the core catchers (more on this below) are providing a similar estimate of the ages as the paleomagnetics. This is so exciting to watch in real time, I keep thinking about whether there is a way we could reenact this in a classroom setting.

Now we are on the second hole. Hole B is primarily being taken for squeezing out pore waters – this is the water captured in pores of the deep sediment. We hope it can tell us about the salinity and oxygen isotope composition of the water long ago. The oxygen isotope composition of glacial water is important for understanding how much ice there was, as well as the temperature of the deep ocean. Sophie Hines, a graduate student working with Jess Adkins at Caltech, is leading the effort. She and the other four geochemists, including Lamont’s Allison Franzese, are working hard to get the pore waters squeezed. It is a tough operation, and the presses are not always as cooperative as one might wish. The geochemists decorated the most cantankerous press with a photo of Jess, who wrote the proposal for the pore waters project, to ensure they remember whom to blame.

I mentioned the foraminifera and calcareous nannofossils (calcareous means they build their shells with calcium carbonate) that were found in the core catchers. At the bottom of the core barrel – remember Lisa’s analogy to the straw in the milk shake – there is a mechanism that is open when the barrel is going down into the mud. When the core barrel has penetrated into the sediment and the rig starts to pull it up, that mechanism snaps shut, thereby catching the core and keeping it from falling back out, hence the term core catcher. Some of the sediment goes into the core catcher, and it’s a bit messy, so it is taken immediately and used for examining the microfossil content. Sometimes it’s disappointing, but in this case, the microfossils except for the siliceous ones are working out really well. More about the siliceous ones in another post.

Sidney Hemming is a geochemist and professor of Earth and Environmental Sciences at Lamont-Doherty Earth Observatory. She uses the records in sediments and sedimentary rocks to document aspects of Earth’s history.