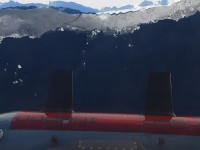 FROM THE FIELD
Decoding the Mysteries of the Ross Ice Shelf

Thanksgiving week at McMurdo has brought warm, clear weather, so it is hopeful we will have a full week of back-to-back flights in our second-to-last week. The weather was perfect for the annual Antarctic “Turkey Trot” 5k race. The Rosetta Project‘s very own Chloe Gustafson won first place, and holds the honor of being the first woman to win the race! Chloe Gustafson won first place in the Antarctic Turkey Trot and holds the honor of being the first woman to win the race!

The warm weather has also begun to melt the snow around the station, turning it mushy and revealing the dirt underneath the ice that we had forgotten was there. The landscape of McMurdo changed over the course of a number of hours, from ice- and snow-covered to “mud season.” As the ground surface becomes darker, it absorbs more heat, and the surrounding ice melts faster. This process, called ice-albedo feedback, is one that is driving a majority of the accelerated change in both poles.

Sea ice images collected from IcePod from the Rosetta Project.

We observed another rapidly changing part of the Antarctic landscape during a recent Rosetta survey flight that skirted the edge of the ice shelf to observe sea ice, icebergs, and areas of persistent open water called ‘polynyas’.

Icebergs are chunks of glacier that break off into the ocean. We saw ‘tabular icebergs’–boxy chunks of ice that still have sharp vertical walls after breaking off the ice shelf. On our flight, most of the icebergs I saw were frozen into the sea ice, like ice islands sticking out from a frozen ocean. Sea ice forms from the freezing of ocean water: small chunks of ice called ‘new ice’ grow and merge into sheets of thin sea ice, which then accumulate snow. While it is still in motion, the ice is called ‘drift ice,’ but once it freezes to the front of the ice shelf or the sea bed, it is called ‘fast ice.’ The fractured tiles of sea ice and dark water looked like stained glass, and it was incredible to see the variety of patterns and the shifting colors of light reflected in the icy seascape below. Lidar image of sea ice shot from the IcePod. The ice carries a look of intricately woven lace.

In collaboration with the University of San Antonio project Polynyas and Ice Production in the Ross Sea (PIPERS), we used IcePOD, our aircraft-mounted suite of sensors, to help measure the thickness of the sea ice and get a better understanding of temporal and spatial patterns of air-sea-ice interactions. The cracks and gaps in the sea ice were of special interest to the PIPERS scientists, who are studying the evolution of polynyas in the Ross Sea, which are caused by upwelling water or wind currents. You can learn more about PIPERS on their website. A new species of sea anemone called Edwardsiella andrillae. This species lives with most of its column in the ice shelf, with only the tentacled crown extending into the seawater below. A and B show the specimens in situ. Red dots are 10 cm apart. Image: ANDRILL 200 Coulman High Project /SCINI.

Understanding sea ice is important to polar biology and polar oceanography. The sea ice hosts a unique ecology of animals and bacteria. Penguins, seals, and other marine animals use the sea ice. Species of photosythetic plankton live on the bottoms of sea ice chunks. Famously, the ANDRILL project discovered a previously unknown species of sea anemone, Edwardsiella andrillae, that lives clinging to the underside of the sea ice in the Ross Sea. Sea ice also plays a role in keeping the polar oceans cold, reflecting the Sun’s energy off its shiny white surfaces back into space. Lastly, as sea ice freezes, salt is squeezed out into the surrounding water, making it denser and thus causing it to sink. This downward push helps to drive the conveyor belt-like circulation of surface water from the equator to the poles, and the bottom water circulation from the poles to the equator. This is called thermohaline circulation. Thus, sea ice plays a role in the Earth’s oceans, both locally in the Antarctic and worldwide.

Why did the scientists of PIPERS want to use IcePod when flying over their sea ice study area? Not for the ice-penetrating radar, which looked very confusing after processing–both the shallow and deep ice radar instruments are intended for looking through hundreds of feet of ice, not a few feet of sea ice. But our LiDAR (Light Detection And Ranging) returned some beautiful three-dimensional images of the sea ice-topography. They can use these high-definition images to study small details of the ice. Ice threaded with leads of open water that show up dark black against the white ice. These dark areas absorb energy from the sun causing a feedback loop.

Flying over the sea ice was a treat for the flight’s passengers, myself included, but it was not the most interesting flight for the trip’s IcePod flight engineer, Tej Dhakal. I asked him what kinds of terrain are the most interesting to fly over as he is monitoring the instruments. He said that he enjoyed flying over areas where the instruments reveal hidden details: the Crary Ice Rise, a large mound of ice forming over a rise in the seabed below that is only really visible in the radar echograms, and the Siple Coast, where a sharp change in radar returns indicates precisely where the coastline sits, which is often different than what has been previously mapped. The Trans-Antarctic Mountains are interesting because there is a high density of crevassing. Hopefully this week’s remaining flights will add this kind of interest.

Wendell seal mother pops up from the hole in the ice to communicate with her pup.

In seal news, the baby seal, whom I’ve named Boopy, has grown much larger and is nearly ready to go for its first swim. Its mother popped out of the ice hole to yell at it to not bother the larger seal lying nearby.

For more information about Rosetta-Ice, check out our website and the archive of this blog. Have questions about Rosetta-Ice or about living and working in Antarctica? Feel free to email your question to juliansantarctica@gmail.com, and I will try to answer it in the next blog entry!

Julian Spergel is a graduate student at the Department of Earth and Environmental Science at Lamont-Doherty Earth Observatory and is blogging from Antarctica. He works with Professor Jonathan Kingslake on analyzing spatial and temporal trends of supraglacial lakes on the Antarctic Ice Sheet using satellite imagery.