In February, the long-predicted El Niño event in the Pacific began to finally take shape. While sea-surface temperatures in the equatorial Pacific cooled somewhat for a few weeks in the Niño3.4 region, other factors pointed towards El Niño formation and led scientists from NOAA and IRI to issue an El Niño advisory. These other factors were related to atmospheric participation in the El Niño and included convection around the international dateline, a weakening of the tradewinds and a negative trend in the Southern Oscillation Index. Furthermore, a Kelvin wave, which travels below the surface from west to east across the equatorial Pacific, was observed in late January and early February. A Kelvin wave often — though not always — leads to warmer temperatures at the surface of the Pacific. This is in fact what happened in February, with temperatures once again reaching above the weak El Niño threshold. More on the factors that led to the El Niño call in this NOAA ENSO blog post.

The latest weekly Nino3.4 SST anomaly is 0.7ºC, which is within the weak El Niño range. This map and more in our data library: https://t.co/sxpdQ5lhvl. + More about ENSO: https://t.co/GldQNBgs3D. pic.twitter.com/iRd4n1zHRR

It’s unusual for an El Niño advisory to be issued this late in ENSO cycle, which typically runs from around June to the following May. The current advisory system has only been in place since February 2009, so there isn’t a lot of similar historical advisory data to which to compare this issuance. But Michelle L’Heureux, a climate scientist at NOAA’s Climate Prediction Center, has been participating in the ENSO updates since 2007, and she said the only other time they declared an El Niño or La Niña this late in the cycle was in March 2015.

“During February 2015, we saw ‘El Niño conditions’ finally emerge after a borderline situation in the winter of 2014-15,” said L’Heureux. “We didn’t have much inkling at that point that it was going to be the start of the major 2015-16 event, but it effectively ended up being the start of a long string of El Nino advisories that ended in May 2016.”

L’Heureux also added that when an advisory is “declared,” it’s on the basis of El Niño or La Niña “conditions” that are defined somewhat differently from what will eventually appear in the historical, retrospective chart of Nino-3.4/ONI values. To have El Niño or La Niña “conditions” means that three factors must be met: (1) one month of the Niño3.4 value in excess of our -/+0.5C thresholds; (2) an expectation/forecast that this Niño3.4 status will continue for at least a couple of seasons; and (3) clear participation from atmosphere, based on a wide range of atmospheric indices and pattern analysis. More details in the flow chart from NOAA below and in the blog post here. Although these factors include the expectation that El Niño or La Niña conditions will continue, it’s not a guarantee, as forecasts are not always right. “We can’t rule out that we see it for a month and then everything falls apart,” said L’Heureux. “That would be less than ideal since ENSO is something that is supposed to last for several seasons, but we can’t rule it out.”

The advisory factors also don’t definitively say how the El Niño may be seen in retrospective either. “In the recent situation, we’re fairly confident that the atmosphere wasn’t participating prior to January 2019, just we are confident the atmosphere wasn’t participating prior to February 2015,” despite the elevated Nino3.4 sea surface temperatures (SSTs) in the fall of winter of 2014-15, said L’Heureux.

One indicator that the atmosphere wasn’t participating until the last month is the rainfall pattern over the central equatorial Pacific. Typically during El Niño, we would see more rainfall than average near the intersection of the international dateline and the equator. But during the September to November 2018 season, when Nino3.4 SST conditions were at +0.7ºC, we did not see the corresponding rainy weather in the areas where we would expect. And, as this recent NOAA blog post shows, looking back in the historical record, 2018 was one of just two below-average rainfall autumns near the dateline when oceanic El Niño conditions were present. The other year was 2014, preceding the March 2015 advisory that L’Heureux mentioned above.

Recent seasonal anomalies of rainfall over the Pacific do not show a typical El Niño pattern. Looking at just January, though, the dry area to east of date line is breaking up, and rain is moving (barely) eastward. #IRIforecast pic.twitter.com/crmiHexVCR

To predict ENSO conditions, computers model the SSTs in the Niño3.4 region over the next several months. The plume graph below shows the outputs of these models, some of which use equations based on our physical understanding of the system (called dynamical models), and some of which use statistics, based on the long record of historical observations.

The probability for El Niño conditions to continue is around 75 percent for the coming months. El Niño conditions are the most likely outcome through the end of the forecast period, though El Niño odds dip below 50 percent in the later months. The El Niño odds are somewhat lower in the official probabilistic forecast issued by CPC and IRI in early February than in this mid-month CPC/IRI forecast. This early-February forecast uses human judgement in addition to model output, while the mid-month forecast relies solely on model output. More on the difference between these forecasts in this IRI Medium post.

Each month, IRI issues seasonal climate forecasts for the entire globe. These forecasts take into account the latest model outputs and indicate which areas are more likely to see above- or below-normal temperatures and precipitation.

Here’s the upcoming seasonal forecast for precipitation. “Weak is the magic word for this #ElNiño, so we don’t expect strong effects,” says Barnston. Visit our page for the seasonal forecasts moving later in the year: https://t.co/cNeHVgqA9h. #IRIforecast pic.twitter.com/L1zvzw3C2Z

Tony Barnston provides an overview of the briefing:

This post was originally published by Columbia’s International Research Institute for Climate and Society on February 28. Read their ENSO Essentials and Impacts pages for more about El Niño and La Niña. 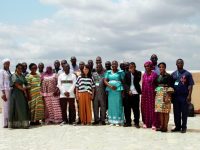