The retreating Greenland ice sheet has become a symbol of the climate crisis. The reasons that its retreat poses a global threat are well known: as the massive ice sheet melts, sea levels are rising, the Earth’s albedo will decrease, and global ocean circulation will be disrupted. This melt even affects the world’s gravitational field. Now, a May 2021 study published in Nature warns of a problem that no one saw coming. 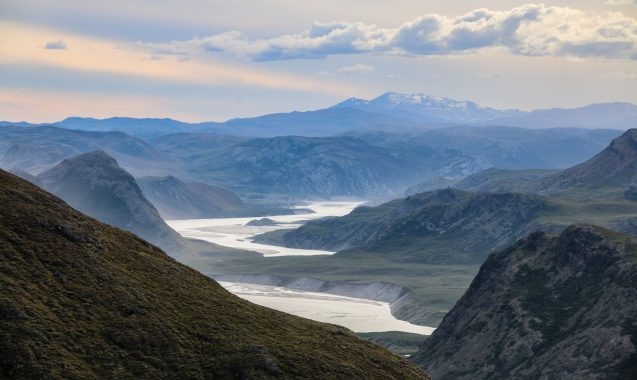 In 2012, the paper’s lead author, Jon Hawkings, attended a conference where he spoke with scientists from Woods Hole Oceanographic Institute about their work on the Greenland ice sheet. They remarked that they had sampled waters for mercury as part of a suite of other tests, and that the levels they read were unusually high.

This mention of high mercury readings stuck with Hawkings, an environmental geochemist with appointments at Florida State University and the German Centre for Geosciences in Potsdam. When he was back in Greenland doing research in 2015, he decided to take more samples and to look for mercury specifically.

“Mercury is a trace element, so it is difficult to sample,” explained Hawkings in an interview with GlacierHub. “Even when it is present at toxic levels, it is at a very low concentration — we are talking about a grain of sand in an Olympic-sized swimming pool.” This new round of sampling yielded results similar to those that his colleagues had obtained three years earlier. “We cross-referenced our samples against the samples that the scientists from Woods Hole had taken earlier and they were the same levels,” he said. “Very high.”

A view of Nuup Kangerlua (fjord) and the icebergs that originate from terminating glaciers. Photo by Rupert Perkins.

After his 2015 findings, Hawkings returned to Greenland in 2018, and sampled two more glaciers. “Very high levels of mercury were found across all three of the glaciers and there were environmentally high concentrations of mercury in the fjords downstream,” said Hawkings. “That let us link the two systems. We were much more confident that the mercury levels weren’t an anomaly, or something that was happening at just one glacier.”

Mercury is an element that occurs naturally on Earth. In its elemental, or metallic, state, it is liquid at room temperature and, as a result, is often called “quicksilver.” Historically it has been used in thermometers and light bulbs. Inorganic mercury, the form of mercury found in non-living things and without carbon bonds in its molecular structure, occurs widely in nature, usually as part of the mineral cinnabar. Organic mercury, which exists primarily in living organisms and contains carbon and hydrogen atoms as well as mercury, is also found widely on our planet and is highly toxic.

The natural release of inorganic mercury occurs primarily through the weathering of rocks. However, since industrialization, human processes have come to dominate the planet’s mercury cycle. Power plants, waste disposal and manufacturing all release inorganic mercury, which travels into soil, water and air.

As inorganic mercury, like that being released by the Greenland ice sheet, cycles through the atmosphere, some of the mercury bonds with carbon and hydrogen atoms to form methylmercury, an organic form which is a dangerous neurotoxin. Exposure to methylmercury can result in cognitive impairment, deterioration of motor skills and muscle weakness. Elemental mercury exposure has even more drastic consequences, such as organ failure and death.

Birds like this great blue heron can be exposed to methylmercury by ingesting fish that have accumulated the substance in their tissue. Source: dklaughman on Flickr

Once methylmercury is introduced to an ecosystem, it works its way up the marine food chain, from bottom feeders to larger predatory fish, humans, and seabirds.

The researchers needed to locate the source of the inorganic mercury that they found in their samples. The mercury readings that Hawkings and his team obtained were not consistent throughout the depth of the ice sheet. Surface level snow and ice showed much lower mercury levels, which led the scientists to believe that the source of the mercury was the bedrock beneath the ice sheet.

“All of the meltwater flows to the subglacial environment where the ice meets the bedrock,” explained Hawkings. “As it flows along that interface, it interacts with lots of sediment that grinds the bedrock down.” When bedrock is rich in mercury, this weathering from the meltwater releases that mercury into the water.

How much is a “very high” reading of mercury? “The fluxes that we estimate coming out of southwest Greenland, where we know the bedrock geology is pretty consistent, is about 5-10% of the global estimated riverine flux of mercury,” said Hawkings. “It’s really a huge amount. If you normalize the flux for that area, it is two orders of magnitude higher than other rivers.” The concentration of mercury in the measured area — a 7,500-square-kilometer catchment — is 130 to 165 times higher than that in other Arctic rivers. 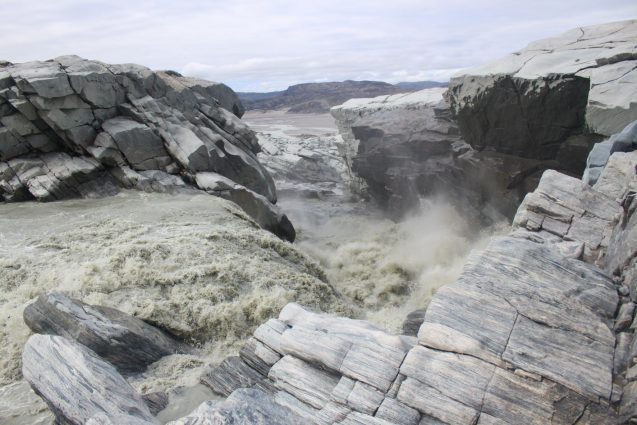 Sediment-laden meltwater flows over a waterfall from Leverett Glacier in southwestern Greenland. Courtesy of Jon Hawkings.

Even within the glaciology community, the biogeochemical effects of ice loss are not well understood. This makes it even more pivotal to curb ice loss as much as possible. “We are going to see a lot of change in the amount of ice and meltwater coming off Greenland and there’s not much that we can do about that now,” said Hawkings. “We have to minimize the amount of mass loss.”

Much remains to be seen about what these findings mean for our future. It is possible that the mercury deposits from this research site are higher than those elsewhere in the ice sheet’s bedrock. It’s also possible that as the ice melts, the added water will dilute the mercury enough that it doesn’t become a long-term problem. “There are lots of questions to answer still, but it could be a very high flux, a concerningly high flux, which isn’t included in current estimates and could be climatically sensitive,” said Hawkings. “It is going to be really difficult to manage.”

So interesting! Not great news, but still grateful to learn what is really going on in the world.