In the 1990s, the Earth’s axis underwent a major shift. It is normal for the Earth’s axis to move by a few centimeters each year. But, in the 1990s, the direction of polar drift shifted suddenly and the rate of the drift accelerated. The reason for this sudden change was previously unclear, but a team of scientists in Beijing recently published a paper that shows that the main driver of the change in direction of the axial shift was glacier melt caused by global warming. 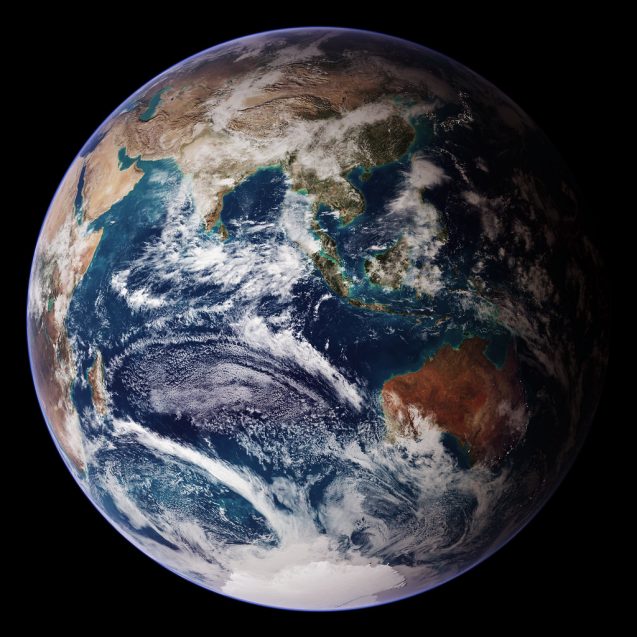 Earth as seen from a satellite. Source: NASA/Goddard Flight Center

The Earth’s spin axis is the figurative line about which the Earth rotates. The poles, north and south, are situated at either end of the spin axis. By contrast, the magnetic poles — the ones you can find using a compass — are usually offset from the geographic poles, and their location shifts with the magnetic field.

“The Earth rotates around its axis somewhat like a spinning top,” explained Suxia Liu in an interview with GlacierHub. “If the weight from one area is moved to another area, the spinning top will start to lean, causing the rotation axis to change.” Liu co-led the paper with colleague Shanshan Deng at the Chinese Academy of Sciences.

Bernhard Steinberger, a researcher at the GFZ German Research Centers for Geosciences who did not work on this paper, explained how glaciers influence mass distribution. “The Earth always orients itself relative to the pole in a way to move masses as far as possible away from the pole,” he wrote in an interview with GlacierHub. “As an example, if there is a glacier growing on Greenland, the Earth’s orientation will change in such a way that Greenland is further away from the pole. If a glacier melts on Greenland, it would change in the opposite direction.”

Prior to human-caused forces, the primary drivers of polar drift were ocean currents and the movements of the molten rock deep below the Earth’s surface. The research team reanalyzed existing data to determine what role terrestrial water storage — how water is dispersed above Earth’s surface and in oceans and groundwater — played in the shift. They determined that the key driver of the directional change was glacier melt, and the change in mass distribution that arose from it.

Most of the world’s glaciers are above ground, and when these glaciers melt, the water that they contain moves into bodies of water. “Shifting water storage away from above-ground glaciers in one area on the Earth’s surface to another results in the polar shift due to the weight change,” said Liu. 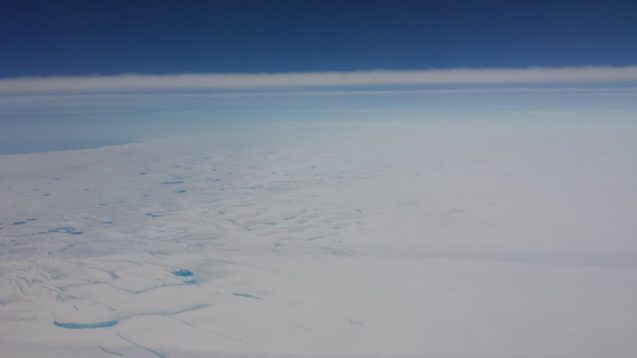 In 1995, the direction of the planet’s polar drift abruptly shifted from southward to eastward. Today, scientists can connect polar drift to glacier loss using gravitational data from NASA’s twin Gravity Recovery and Climate Experiment (GRACE) satellites, which launched in 2002. However, since the satellites had not yet been launched in the 1990s, researchers had to piece together the reasons for the sudden directional shift without these detailed gravitational records.

Besides the greenhouse gasses emissions that cause glaciers to melt, other human activity is responsible for changes in Earth’s hydrosphere. The team also found that groundwater pumping was, and continues to be, a factor in polar drift. Groundwater pumping for drinking water, irrigation, and manufacturing has been common practice since the 1960s. The United States alone uses 82.3 billion gallons of groundwater each day. The water that is removed from below ground ends up in the atmosphere as it evaporates from irrigated crops or in the ocean as runoff from irrigation systems into rivers, redistributing mass around the world and altering the planet’s rotation. 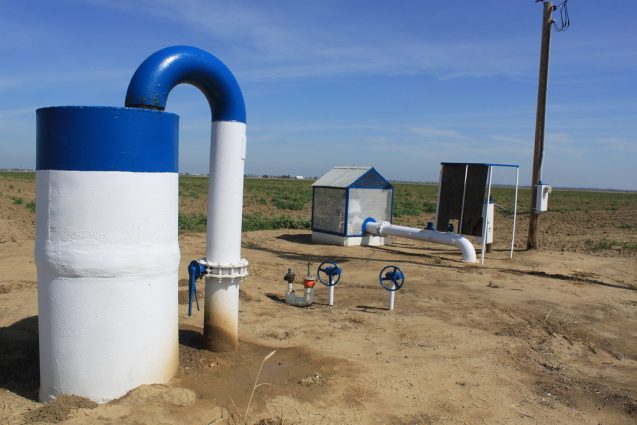 As the Earth’s glaciers recede at unprecedented rates, the planet’s mass is being constantly redistributed. The team’s findings suggest that we can expect to see the hydrosphere continuing to cause the Earth’s axis to shift in coming years.

Though imperceptible to humans without the use of specialized instruments, the tremendous mass of the Earth has been shifting more than ever recorded. Since 2005, the rate of polar drift has increased by about four centimeters per year. “The shift is nothing that a regular person might notice in their day-to-day life,” said Steinberger. “One would really have to wait for millions of years in order to notice something.” It is, however, a stark reminder of the magnitude of humans’ effects on the planet.

The article says the shift is so slight that we dont feel the effects.
I get the axel shifts per weight distribution. There are so many factors to consider regarding the demise of mankind.
The plastic islands. The solar bursts or flares. The poles shifting. The population. The food supply. Seems like theres too little too late. I did some research and earths capacity is approx. 10 billion and that is sustaining us with no meat. we are quickly approaching 9 billion. We are dependant on electricity and is pretty obvious anything can cause that to go down at any time and brings us to a complete stop.
For every death there are 2 births. We are completely lopsided the balance of our precious eco system is failing fast.
Theres so much more going on and these articles act like we have millions of years left and we don’t.
Forget finding another planet because again with all the satillites. Out there in space and all the junk floating around. Good luck getting thru all that stuff with a rocket. Take a look at google world with all the stuff in space
What we need is immediate world change if we could reverse the future of mankind. Who are we kidding here?
These are scary days.

And based on your stated time, you don’t feel we are on borrowed time Mr. Robert Deen?

A laughable analysis by China – a country that has never applied a doctrine to reduce Climate Change – Fact – They Break Every Agreement Purposefully – China simply uses climate change to reduce geopolitical rival output, thus increasing its strangle hold on the world economy, All While hanging the carrot of research grant money in front of all to eager research institutes to further manipulate and control the news out of all entities – touting the next announcement as critical on one hand -inciting- more regulation, all while laughingly breaking the very same rules on the other hand with ruthless disregard.

Climate Change is entirely unstoppable, the speed of change is merely an extrapolation of consequential acts, few resulting from the density of population, or application of carbon based energy development – it’s simply when and how – not if – The earth is in a constant state of change – at all times – as little as 500 years ago Europe went thru drastic temperature changes, entirely independent of the acts of mankind

The world has always been in a precarious state of balance where minor changes in climate has had dramatic effect, even within the last 100 years

So rather than wasting the effort trying to stop an unstoppable series of events, know these changes are going to occur and take action –

Anything else is simply hyperbola –

Permafrost is melting, ice sheets are breaking off, glaciers are receding

Sea levels are rising take action on averting that absolute certainty now,
Potable water is one shortage today, but the change in air-able land with a reliable water source is entirely more important, we as a species are facing a forceable world famine due to reduced output – another absolute certainty

it only took the loss of one crop planting in Ukraine over a period of the last 2 months to assure a world food shortage for some, and starvation for countless others, yet real action today again can avert a complete catastrophe

Yeah it kind of works into the adams event, laschamp cycle. There are so many variables and from so long ago. It really takes broad spectrum analysis of all the things that happened in conjunction. However,polar shift is left out of the mainstream and it requires a deeper discussion of preparation. As it is clearly changing.

Isn’t this what happened millions of years ago?
The planet went through ice ages,
and hot climates,
When most life was lost.

How can you stop the sun shinning?
Just because its shinning over the North Pole,
It can’t be protected and everybody knows over time ice will melt.

Isn’t there some things like day and night coming and going,
that can’t be prevented?

Some people are coming out with their ideas?
But lots of different people have such different ideas.

So who is right?
Who do we believe?

I heard the moon is moving away from the earth as is the sun?

Is it not the earth moving away from them both?

Does all the mining, drilling and tunnelling etc, that’s being done and has been done, over a long time, not have some effect on the earths core?.
So cause issues?

We see more and more sink holes appearing.
Which is scary because they can happen anywhere, anytime without warning.

People also just seem to think they can go anywhere on the planet and do anything they want without thought or without care for the planet,
and as stated, also leave their junk in space.

Also again stated so much air pollution by so many countries.
Again as stated the planet is getting so over crowded and could be causing its own down fall?
So many reasons could be a cause or none could be?
So nothing can change things?
It might just be evolution and the end of some life but so the start of other life?
As we came to be?

Even if the effects are just very slight it can still move high pressures and low pressures/jet streams just enough to drive the weather different directions. Not to mention corresponding fluctuations of the spin of the core of the earth being reflected in fluctuations in the gravitation field which can affect jet stream and low pressures.

The gravitational field is NOT uniformed and that can affect air masses.

It goes along with what this article is about shifting of the weight of the earth in small degrees.