More Carbon Emissions Will Kill More People. Here's How Many.

A just-published study coins a new metric: the “mortality cost of carbon.” That is, how many future lives will be lost—or saved—depending on whether we increase or decrease our current carbon emissions. If the numbers hold up, they are quite high. The study was published today in the journal Nature Communications.

Study author R. Daniel Bressler, a PhD. candidate at Columbia University’s Earth Institute and the university’s School of Public and International Affairs, saw a major gap in current estimates of the social cost of carbon—the dollar figure that economists attach to each ton of emissions, based on future damages it is expected to inflict. A complex and highly malleable number, the social cost of carbon underpins how governments worldwide formulate climate policies, by suggesting how much we should be willing to pay today in order to avert damages in the future. Yet, while recent studies project that climate change will cause millions of premature deaths, current estimates of the social cost of carbon rely on outdated research that does not include those projections. Bressler attempts to add in the new data.

“Based on the decisions made by individuals, businesses or governments, this tells you how many lives will be lost, or saved,” says Bressler. “It quantifies the mortality impact of those decisions. It brings this question down to a more personal, understandable level.” A new study quantifies how much adding a ton of human-produced carbon dioxide emissions will contribute to human mortality over time. Here, a farmer in the Peruvian Amazon sets a fire to clear land for agriculture. Such fires are a substantial source of emissions. (Kevin Krajick/Earth Institute)

First, the caveats. Bressler doesn’t claim his number is definitive. He estimated the mortality impact of climate change based on several key public-health studies. But there is a lot of uncertainty in those studies; Bressler’s main findings are based on their central estimates. For another, Bressler’s study accounts only for direct temperature-related mortality, such as heat stroke; it leaves out possible deaths from storms, floods, crop failures, infectious diseases or wars—all widely predicted threats, but harder to quantify. He admits that his estimate could in fact “be a vast underestimate.”

Assuming that emissions continue to increase on their current high path, he came up with a number: 2.26×10-4, or 0.000226 excess deaths this century per metric ton of carbon dioxide emitted beyond the current rate of emissions.

Even Bressler found it hard to grasp what this number really meant, so he found another way to express it. That is: For every 4,434 metric tons of CO2 that we add beyond the 2020 rate of emissions, we will kill one person. Those 4,434 tons are equivalent to the current lifetime emissions of 3.5 Americans; or, to put it in more personal terms, if we proceed on our current path, adding the current lifetime emissions of one American would theoretically kill 0.29 extra humans. That does not mean each living American is currently slated to kill 0.29 people–rather, it implies that adding 1,276 metric tons of carbon dioxide tons of carbon dioxide in 2020, equivalent to the lifetime emissions of one American, would kill 0.29 people this century through the effect on temperature-related mortality. 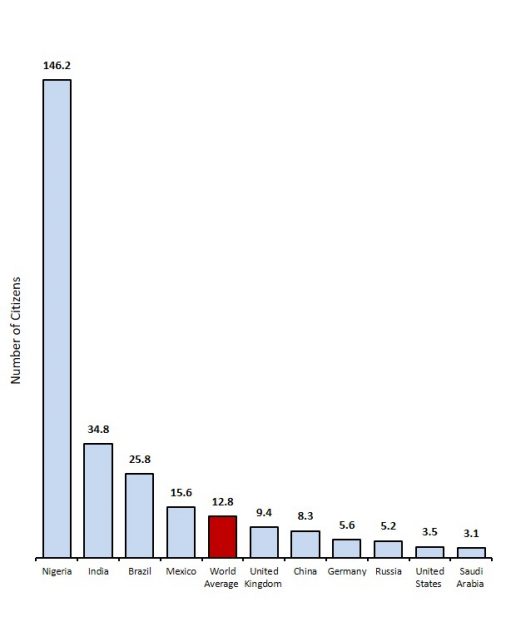 The addition of 4,434 metric tons of carbon dioxide emissions beyond the baseline 2020 rate is expected to cause one human death by 2100. Here, lower bars indicate individuals in each country would have higher impact; those 4,434 tons are equivalent to the lifetime emissions of just 3.5 Americans, as opposed to 15.6 Mexicans or 146.2 Nigerians. (Adapted from Bressler, Nature Communications, 2021)

This number compares unfavorably with most of the rest of the world. On a global average, 4,434 tons equals the lifetime emissions of 12.8 people (theoretically killing only 0.08 people per capita). Even in the relatively wealthy United Kingdom, it would take the current emissions of 9.4 citizens to produce the same amount of excess mortality (killing 0.11 per capita). It would take 25.8 Brazilians (killing 0.04 per capita); or 146.2 Nigerians (killing just 0.01 person per capita). A small number of countries come out looking worse than the United States, including oil-intensive Saudi Arabia (killing 0.33 people per capita). Also on that short list: Australia, Qatar, Kuwait and the United Arab Emirates.

The study assumes that on our current emissions path, by 2050, average temperatures will surpass 2.1 degrees C (3.8 F) above those of preindustrial times—the largely agreed-upon limit after which the worst consequences of climate change will kick in. After that, things would get much worse quickly, with temperatures reaching 4.1 degrees C (7.4 F) higher by 2100. Bressler projects that under this scenario, climate change would cause 83 million excess deaths by 2100.

Since temperatures start hitting truly serious levels by 2050 under this scenario, most of the premature deaths would take place after that. The study does not explicitly look at geographic distribution, but Bressler says that most of the deaths would be in regions that are already the hottest and poorest: Africa, the Mideast and South Asia.

How does this play into the social cost of carbon? If you accept the study’s numbers, it skyrockets.

Since its inception by the Nobel prize-winning economist William Nordhaus in the 1990s, the social cost of carbon has undergone many permutations, driven in particular by increasing understanding of the human impacts of climate change, along with shifting estimates of future temperatures and the degree to which we may be able to adapt to them. There are also competing models for totaling all the different factors into a single monetary figure.

Nordhaus’s commonly used DICE model, which Bressler builds on, currently puts the 2020 social cost of carbon at $37 per metric ton. This model suggests that in order to achieve the optimal balance between climate-related damages and the costs of cutting emissions, we should plateau emissions now, and cut gradually starting in 2050. This would result in 3.4 degrees C (6.1 F) of warming by 2100.

But by adding in mortality to the model, Bressler puts the figure at $258 a ton—seven times more. This implies that we must cut emissions in a big way now, and reach full decarbonization by 2050. The result would be only 2.4 degrees of warming by 2100. As a result, by Bressler’s calculation, excess deaths would drop to 9 million by 2100—a saving of 74 million lives. This is not necessarily a prescription for the optimal climate policy, he says—just an update to the DICE optimal policy.

All these figures are subject to political finagling. In 2009, the Obama administration first mandated that scientists calculate a U.S. cost of carbon, and by 2017, the figure was $52. The Trump administration halted most scientific work on the question, and later came out with estimates ranging from about $15 to $1 a ton. When Joseph Biden took office, the scientists reassembled. An interim report issued in February puts the 2020 price back up to $51 a ton; a more official estimate is due by January 2022.

“My view is that people shouldn’t take their per-person mortality emissions too personally,” says Bressler. “Our emissions are very much a function of the technology and culture of the place that we live.” Individuals, companies and communities should certainly try to reduce their own emissions, he says. But a more effective answer, he says, would be “large-scale policies such as carbon pricing, cap and trade, and investments in low-carbon technologies and energy storage.”

I think People are dangerous for nature.

Once it dawns upon us all that there’s nothing we can do, we will eventually do nothing