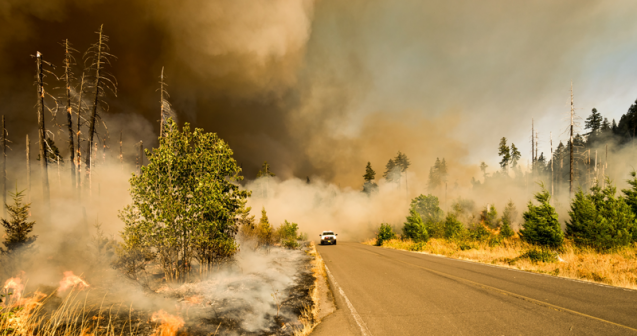 This opinion piece was first published in The Hill. The full text is available here.

It’s hard to imagine that a resurgent delta variant of the SARS-CoV-2 virus is not the only on-going serious threat to the public’s health. But what is emerging now, as wildfires consume millions of acres of woodlands across North America, is that ferocious fires and smoke conditions are causing fatalities and widespread exacerbation of many chronic illnesses throughout the continent, even in communities and cities not actually on fire. Record breaking heat, rampaging wildfires and widely dispersed smoke and haze all represent grave threats to public health.

Earlier this month, record setting heat waves sent temperatures 20 to 30 degrees above normal in parts of western U.S. and Canada, further drying out soil and other brush that were already experiencing severe drought. According to the U.S. Drought Monitor, about 60 percent of the U.S. West is currently facing sustained drought conditions.

Nationally, more than 3.3 million acres have already burned across the U.S. in over 37,000 fires — all in just the first seven months of the year. In California, wildfires had already burned three times more land by early July than at the same point during last year’s record-breaking fire season. And in Oregon, the deadly Bootleg Fire has already scorched over 400,000 acres — making it the largest wildfire of the season to date as it alters wind patterns and spawns its own lightning.

At this point there can be no doubt that climate change is responsible for exacerbating the conditions that put at least 29 million Americans at risk of wildfires each year. As temperatures in the U.S. West have increased, extreme drought conditions have worsened, leaving dried out forests as tinder boxes awaiting a spark. This past June was the hottest month ever on record for North America, with the average temperature eclipsing the previous record from June 2012 and nearly 2 degrees warmer than the average temperature between 1991 and 2020.

Unlike other natural disasters, wildfires endanger the health and well-being of populations near and far. Toxic gases and particulate matter found in smoke from fires in the West can increase risks of hospitalizations and fatalities from exacerbations of obstructive pulmonary disease, asthma, and cardiac disease as far away as the East Coast. Last week the Air Quality Index in New York City reached 157 — the worst level in 15 years and unsafe for vulnerable individuals, including pregnant women or those with asthma or COPD.

As the nature and extent of the threat evolves with a changing climate, so too must our ability to manage and mitigate near-term risks. In other words, while we seek to galvanize the world around the urgent need to slow climate change, here are three of many possible mitigation strategies that could help save lives and protect the environment in the near term.

Read the rest of the piece here.

Irwin Redlener is director of the Pandemic Resource and Response Initiative at Columbia’s National Center for Disaster Preparedness.

Sean Hansen is a staff associate at the National Center for Disaster Preparedness.