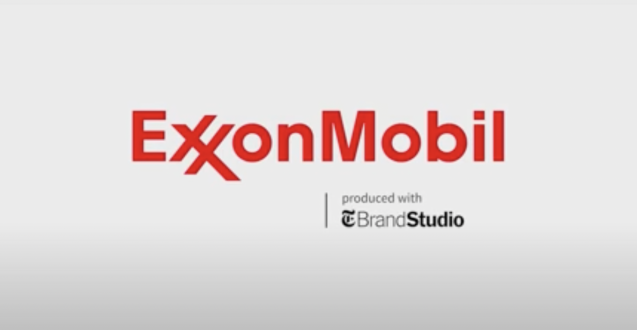 The closing frame of a 2018 video made for Exxon Mobil by the NYT subsidiary T Brand Studio.

A creditable new climate campaign, Ads Not Fit to Print, is pressing The New York Times to stop selling ad space to, or making ads for, fossil fuel companies.

The argument centers on an objectively glaring disconnect between the media company’s news coverage of climate and clean energy and its approach to related promotional content that energy companies pay for:

“The New York Times devotes an entire section to climate reporting, often featuring stories about the accelerating dangers of global heating on its own front page. Yet it also uses the power of its news brand to create and publish advertisements promoting the products causing dangerous global heating in the first place.”

The campaign centers on The Times’s own argument when it ended tobacco advertising in 1999. As a Times spokeswoman explained in the paper’s news coverage of the publisher’s decision at the time, “[W]e don’t want to expose our readers to advertising that may be dangerous to their health.”

For the sake of the planet and its own credibility, particularly with young audiences, the campaigners say, “The New York Times should stop writing or running any print, online, or podcast ads for companies whose main business is the extraction or sale of fossil fuels.”

I hope you’ll weigh in with your views below and sign the petition if you agree.

I support the general thrust, as I tweeted several times in recent days. But I don’t support a hard stop to The Times or other media accepting fossil advertising. Read on for my argument.

As I tweeted, I think an important start would for the Times Company’s T Brand Studio subsidiary to stop creating co-branded advertising for fossil-fuel companies. For one thing, there’s just too much melding of upbeat corporate messaging and The New York Times logo – the heft of which derives almost entirely from 170 years of news reporting.

The brand blur can be seen in the closing frames of a 2018 video made for Exxon Mobil by T Brand Studio:

And while the words “paid for and posted by” are there with Shell’s gold scallop logo for readers with an eye for fine print, this snazzy package on an app “envisioning a lower-carbon future” also highlights The New York Times’s 1907-vintage masthead logo.