From Maine to Delaware, the coastal U.S. Northeast is heating faster than most regions of North America, and a new study shows why. It links the outsize heating to unusually fast-rising temperatures in the North Atlantic Ocean, and alterations in wind patterns that are now tending to send the warmth to the U.S. coast instead of the other way. The research appears this week in the journal Nature Climate Change.

As a result of the changes, not only are Northeastern winters getting warmer, as long projected by climate models, but significant and rapid summer warming is happening as well. “Some of the biggest populations centers in the U.S. are suffering the greatest degree of warming,” said lead author Ambarish Karmalkar, a professor of geosciences at the University of Massachusetts, Amherst. “This warming is being driven both by equally rapid trends in the Atlantic Ocean and by changes in atmospheric circulation patterns.” 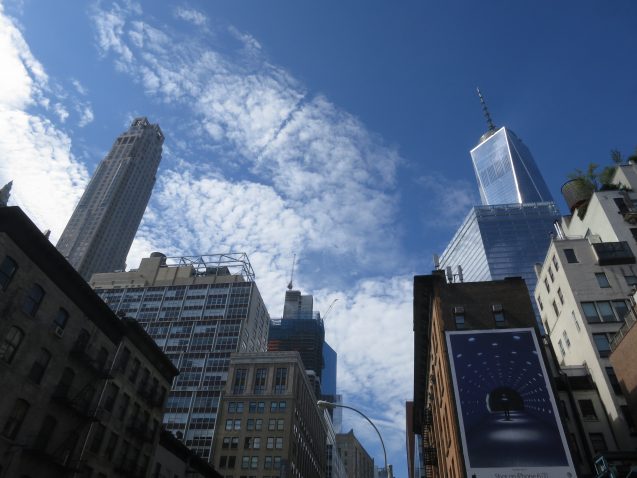 Ocean waters around the world are warming, and thus helping fuel warming on land. But beyond that, several recent studies indicate that the Atlantic Meridional Overturning Circulation (AMOC), a system of long-distance Atlantic currents, is slowing down due to climate change. The AMOC is a sort of conveyor belt that transports warm, salty water from the tropics north toward Greenland, where it cools and sinks. This cooled water then flows back south in the form of deep-water currents. But as climate warms, and glaciers in Greenland melt and send fresh water into the ocean, the conveyor is stalling. One consequence is even more heating of the ocean off the Northeast coast. This helps explain spikes in ocean temperatures in the Mid-Atlantic Bight and Gulf of Maine regions, say the authors.

One link between the AMOC and rising temperatures along the coast is the North Atlantic Oscillation (NAO), a cyclic weather phenomenon that governs the strength and position of the winds that blow from the United States over the Atlantic and on to Europe. There is a degree of natural variability to the NAO, which influences storm tracks, the jet stream and seasonal temperatures in the Northeast. The study shows that the NAO has for the past few decades tended to settle into a pattern that enhances the flow of ocean air toward the eastern seaboard. Because the northwest Atlantic is warming in part due to the AMOC slowdown, this is accelerating heating of cities such Boston, Providence, R.I., and New York.

While scientists already know about the unusual pace of warming in the region, computer models, which try to simulate the forces at work, have so far failed to reproduce the pattern. Radley Horton, a climate scientist at Columbia University’s Lamont-Doherty Earth Observatory and coauthor of the new study, says the rising Atlantic temperatures and altered wind patterns are the missing links.

“Climate models remain our best tool for projecting future climate risks in the populous and exposed coastal Northeast U.S.,” he said. “But the inability of those models to reproduce the observed summer pattern of enhanced coastal land warming relative to inland regions points to a potential blind spot.”

The research demonstrates that scientists should use a new generation of high-resolution climate models that could more accurately capture changes in regional climate, say the authors. “Our research implies that without improved high resolution data, regional climate assessments, which inform out ability to plan for the future, may under-emphasize warming in this populous region,” said Karmalkar.

I have been trying to educate and motivate action on climate change for over thirty years. I hope we can make the changes in life style and other behaviors that are necessary to avoid a disastrous future for our children.

With the invasion of Ukraine- the Russian Petro state will hold more of the world hostage with fossil fuels. Reducing our carbon emissions a small amount each year by 2030 now seems unlikely. Late May 2022- a high of 423-424ppm seems likely. 440ppm by decades end is easily possible. We have a government to entangled with the corporations and banks- just as President Eisenhower warned us about in leaving office in 1961. Living in New England (CT) We are now dreading what summer could bring- and its going to become worse.

The climate in Connecticut has shifted to ‘Cfa’ or ‘humid subtropical’ under the Koppen Climate system in more then two thirds of the state. This is data from 1991-2020- the state is likely warmer now of you take out the years 1991-1999 .New Englanders will now begin to dread the return of summer. If we reach 440ppm C02 in the atmosphere by 2030- its going to become increasingly unpleasant.

i tell myself i’ll stay in Ct. because there are still 4 seasons and
plenty of water. but as i’m older i dread the humidity.

I’ve made the same observation about increased winds here in MA.