A Fifth of World Population Is Affected; Many U.S. Cities on List

A new study of more than 13,000 cities worldwide has found that the number of person-days in which inhabitants are exposed to extreme combinations of heat and humidity has tripled since the 1980s. The authors say the trend, which now affects nearly a quarter of the world’s population, is the combined result of both rising temperatures and booming urban population growth. The study was published today in the Proceedings of the National Academy of Sciences.

Over recent decades, hundreds of millions have moved from rural areas to cities, which now hold more than half the world’s population. There, temperatures are generally higher than in the countryside, because of sparse vegetation and abundant concrete, asphalt and other impermeable surfaces that trap and concentrate heat—the so-called urban heat island effect.

The researchers combined infrared satellite imagery and readings from thousands of ground instruments to determine maximum daily heat and humidity readings in 13,115 cities, from 1983 to 2016. They defined extreme heat as 30 degrees Centigrade on the wet-bulb globe temperature scale, a measurement that takes into account the multiplier effect of high humidity on human physiology. A wet-bulb reading of 30 is the rough equivalent of 106 degrees Fahrenheit on the so-called “real feel” heat index—the point at which even most healthy people find it hard to function outside, and the unhealthy might become very ill or even die.

To come up with a measure of person-days spent in such conditions, the researchers matched up the weather data with statistics on cities’ populations over the same time period. The population data was provided in part by Columbia’s Center for International Earth Science Information Network, where Tuholske is based.

The analysis revealed that the number of person-days in which city dwellers were exposed went from 40 billion per year in 1983 to 119 billion in 2016—a threefold increase. By 2016, 1.7 billion people were being subjected to such conditions on multiple days.

Globally, sheer urban population growth accounted for two-thirds of the exposure spike, while actual warming contributed a third, but the proportions varied from region to region and city to city.

The most affected cities tend to cluster in the low latitudes. The worst hit was Dhaka, the fast-growing capital of Bangladesh; it saw an increase of 575 million person-days of extreme heat over the study period. Its ballooning population alone—4 million in 1983, 22 million today—caused 80 percent of the increased exposure. This does not mean that Dhaka did not see substantial warming—only that population growth was even more rapid. Other big cities showing similar population-heavy trends include Shanghai and Guangzhou, China; Yangon, Myanmar; Bangkok; Dubai; Hanoi; Khartoum; and various cities in Pakistan, India and the Arabian Peninsula.

On the other hand, some other major cities saw close to half or more of their exposure caused by warming climate versus population growth. These include Baghdad, Cairo, Kuwait City, Lagos, Kolkata, Mumbai, and other cities in India and Bangladesh. The populations of European cities have been relatively static, so increases in exposure there have been driven almost exclusively by increased warmth. The researchers found that, overall, 17 percent of the cities studied added an entire month of extreme-heat days over the 34-year study period. 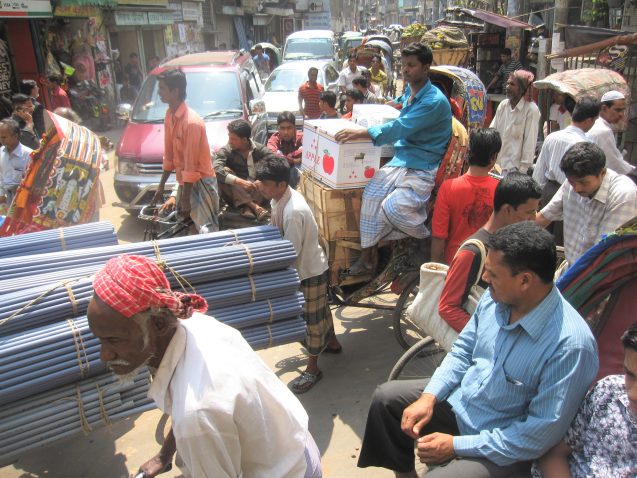 Above, and below, street scenes in Dhaka, the densely packed capital of Bangladesh. It has been getting hotter there, but population growth is even more rapid—five times over since the 1980s. (Kevin Krajick/Earth Institute) 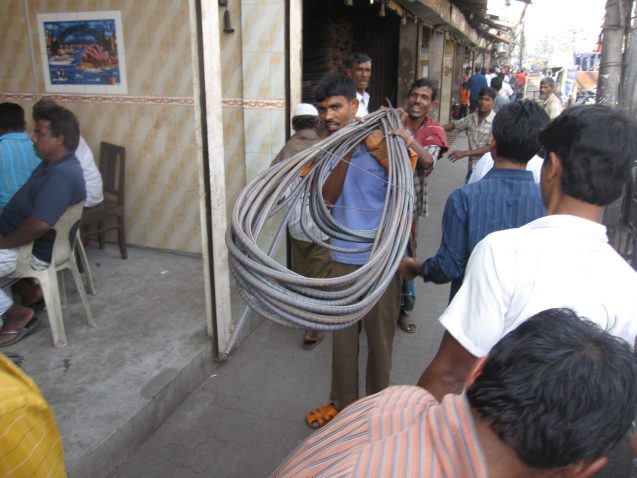 “A lot of these cities show the pattern of how human civilization has evolved over the past 15,000 years,” said Tuholske, pointing out that many are located in warm climates where humidity is delivered by big river systems. This made them attractive for farming and eventually urbanization. “The Nile, the Tigris-Euphrates, the Ganges. There is a pattern to the places where we wanted to be,” he said. “Now, those areas may become uninhabitable. Are people really going to want to live there?”

In the United States, about 40 sizable cities have seen rapidly growing exposure, mainly in Texas and along the Gulf Coast. The causes have been varying combinations of both increasing population and increasing heat. These include Houston, Dallas-Fort Worth, San Antonio and Austin, Tex., along with Pensacola and other cities in Florida. In some, population growth is the main driver: Las Vegas; Savannah, Ga.; and Charleston, S.C. In others, it is almost exclusively fast-rising heat: Baton Rouge, La.; Gulfport, Miss.; and Lake Charles and Houma, La. One major outlier: the bayside city of Providence, R.I., where rising exposure was 93 percent due to warmer, more humid weather.

Because the period covered by the study ran only through 2016, the data did not include the record heat waves that raked the U.S. Northwest and southern Canada this summer, killing hundreds of people.

The study is not the first to document the dangers of excessive urban heat. Among others, last year a separate Earth Institute team showed that combinations of heat and humidity literally beyond the limits of outdoor human survival have been briefly popping up around the world. The newer study led by Tuholske adds to the picture by quantifying on a granular level how many people are being affected in each location, and the population versus climate factors. The authors say this information should help urban planners come up with better-targeted strategies to help cities adapt.

Kristina Dahl, a climate researcher at the Union of Concerned Scientists, said the study “could serve as a starting point for identifying ways to to address local heat issues,” such as planting trees and modifying rooftops with lighter colors or vegetation so they don’t trap so much heat. “This study shows that it will take considerable, conscientious investments to ensure that cities remain livable in the face of a warming climate,” she said.