Why Did Glacial Cycles Intensify a Million Years Ago?

Something big happened to the planet about a million years ago. There was a major shift in the response of Earth’s climate system to variations in our orbit around the Sun. The shift is called the Mid-Pleistocene Transition. Before the MPT, cycles between glacial (colder) and interglacial (warmer) periods happened every 41,000 years. After the MPT, glacial periods became more intense—intense enough to form ice sheets in the Northern Hemisphere that lasted 100,000 years. This gave Earth the regular ice-age cycles that have persisted into human time.

Scientists have long puzzled over what triggered this. A likely reason would be a phenomenon called Milankovitch cycles—cyclic changes in Earth’s orbit and orientation toward the Sun that affect the amount of energy that Earth absorbs. This, scientists agree, has been the main natural driver of alternating warm and cold periods for millions of years. However, research has shown that the Milankovitch cycles did not undergo any kind of big change a million years ago, so something else likely was at work.

Coinciding with the MPT, a large system of ocean currents that helps move heat around the globe experienced a severe weakening. That system, which sends heat north through the Atlantic Ocean, is the Atlantic Meridional Overturning Circulation (AMOC). Was this slowdown related to the shift in glacial periods? If so, how and why? These have been open questions. A new paper published today in the journal Proceedings of the National Academy of Sciences proposes an answer. 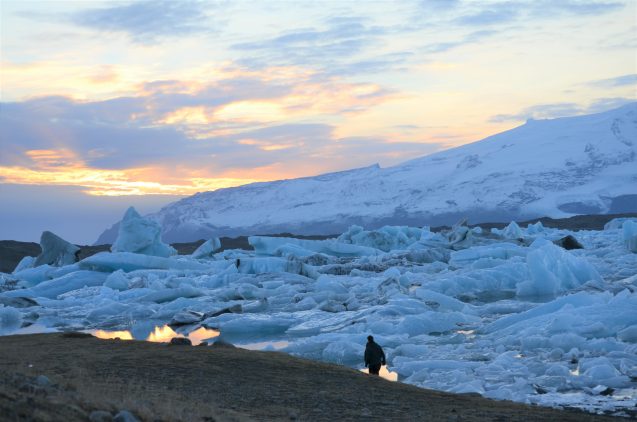 A new study suggests that a million years ago, glaciers began sticking more persistently to their beds, triggering cycles of longer ice ages. Here, ice discharged from Iceland’s Breiðamerkurjökull glacier on its way to the Atlantic ocean. (Kevin Krajick/Earth Institute)

The researchers analyzed cores of deep-sea sediments taken in the south and north Atlantic, where ancient deep waters passed by and left chemical clues. “What we found is the North Atlantic, right before this crash, was acting very differently than the rest of the basin,” said lead author Maayan Yehudai, who did the work as a PhD. student at Columbia University’s Lamont-Doherty Earth Observatory.

Prior to that oceanic circulation crash, ice sheets in the Northern Hemisphere began to stick to their bedrock more effectively. This caused glaciers to grow thicker than they had before. This in turn led to a greater global cooling than before, and disrupted the Atlantic heat conveyor belt. This led to both stronger ice ages and the ice-age cycle shift, says Yehudai.

The research supports a long-debated hypothesis that the gradual removal of accumulated slippery continental soils during previous ice ages allowed ice sheets to cling more tightly to the older, harder crystalline bedrock underneath, and grew thicker and more stable. The findings indicate that this growth and stabilization just before the weakening of the AMOC shaped the global climate.

“Our research addresses one of the biggest questions about the largest climate change we had since the onset of the ice ages,” said Yehudai. “It was one of the most substantial climate transitions and we don’t fully understand it. Our discovery pins the origin of this change to the Northern Hemisphere and the ice sheets that evolved there as driving this shift towards the climate patterns we observe today. This is a very important step toward understanding what caused it and where it came from. It highlights the importance of the North Atlantic region and ocean circulation for present and future climate change.”

The research was led also by Yehudai’s advisor, Lamont geochemist Steven Goldstein, along with Lamont graduate student Joohee Kim. Other collaborators included Karla Knudson, Louise Bolge and Alberto Malinverno of Lamont-Doherty; Leo Pena and Maria Jaume-Segui of the University of Barcelona; and Torsten Bickert of the University of Bremen. Yehudai is now at the Max Planck Institute for Chemistry.

What do you think about Global warming will the next 5 or 10 years become very hard for us?

What is likely the largest cosmic impact in the last 30 million years occurred at precisely 778,000 years ago, at the pivot point of the MPT. Any relationship considered?