Study of West Antarctica's Deep Past Reinforces Vulnerability to Melting

A new study examining the status of Antarctica’s ice around 18 million to 16 million years ago suggests that the West Antarctic Ice Sheet contributed a lot more to sea-level rise events millions of years ago than previously thought.

The period, known as the Early Miocene, saw both warm and cold periods. During warmer periods, sea level is thought to have risen by up to 60 meters—the equivalent of melting all the ice currently on the Antarctic continent.

However, the sea-level contributions of the huge East Antarctic Ice Sheet and the smaller West Antarctic Ice Sheet were uncertain. Now, in a paper published today in the journal Nature, scientists from some 20 institutions have shown that during colder periods of the Miocene, the western ice sheet was larger than previously thought. It was thought to be relatively small before 10 million years ago, and sea-level rises were thought to be mostly the result of near-complete melting of the East Antarctic Ice Sheet during the warmest periods. However, ice sheet models conflict with this idea; they suggest that parts of the eastern sheet remained even during the warmest periods of the Miocene, when sea level rose the most. The new study reconciles these models with the geologic records of sea levels. 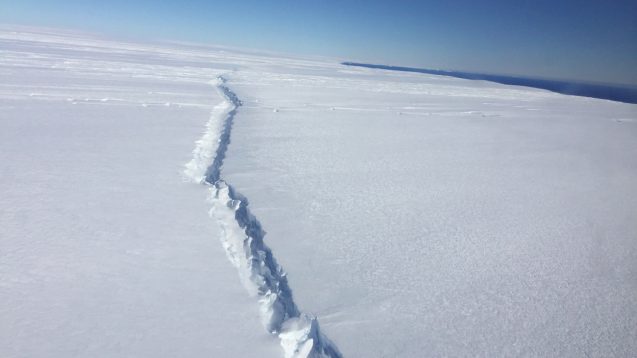 Near the edge of the West Antarctic Ice Sheet. (NASA/Nathan Kurtz)

Lead author Jim Marschalek of Imperial College London said, “Our observations from the past help inform predictions of how the West Antarctic Ice Sheet, which is considered particularly vulnerable to rapid ice mass loss today, will respond under various future warming scenarios.”

The research team, which included geochemists Sidney Hemming and Benjamin Keisling of Columbia University’s Lamont-Doherty Earth Observatory, drilled into sediments in Antarctica’s Ross Sea. In the cores, they retrieved layers that corresponded to the coldest and warmest periods of the Miocene. They found evidence of material deposited by the West Antarctic Ice Sheet far out to sea, indicating that it grew quite large during the coldest periods.

Scientists believe that the western sheet is today very vulnerable to oceanic and atmospheric warming. The new study supports that idea, showing it expanded and contracted significantly during the Miocene. The researchers say that now that the geological information agrees with the models, they can be more confident that the models are capturing the response of the West Antarctic Ice Sheet in the past.

Coauthor Tina van de Flierdt of Imperial College said, “While Antarctica is losing mass at an accelerating rate today, projected sea level rise by the end of this century is nowhere close to the levels that we know existed in the geological past when temperatures were one, two, or three degrees warmer.”

She said that “the past is an important window to tell us what we are committing the planet to with certain amounts of warming. The good news is that the large ice sheets are relatively sluggish to respond to environmental change, so we might still be able to avoid major ice loss in many areas. The bad news is that the low-lying areas of the ice sheet have a tipping point, and we do not yet fully understand where this point of no return lies.”

The team says future work is needed to study in more detail the vulnerable low-lying parts of both the West Antarctic and East Antarctic ice sheets.

Adapted from a press release by Imperial College London.