Blood Glacier and Creative Climate Storytelling for an Uncertain Future

An eerie mountain landscape, a handful of jump-scares, and plenty of gore — “Blood Glacier” may seem like every other low-budget horror film. But it has another story to tell.

“In 2014 the last skeptics fall silent,” the film’s title card begins. “The climate disaster is worse than ever imagined… The consequences are unclear but we know one thing. Life on earth will change forever.”

Throughout the film, a team of scientists, government officials and a technician fight mutants at a research base in the Austrian Alps as a glacier oozes a mysterious red liquid that transforms local wildlife into deadly abominations.

The first time Christy Tidwell watched the film, she laughed. Tidwell is an associate professor at the South Dakota School of Mines and Technology who studies science fiction and environmental humanities.

The film isn’t very good compared to other eco-horrors she’s seen, she admitted to GlacierHub in an interview. But its “badness” struck her curiosity, leading to her recent publication, titled “‘We will change’: Deep past and uncertain future in Blood Glacier,” in the journal Science Fiction Film and Television.

Although the film may not reflect the literal realities of climate change, it asks its audience to consider how their choices shape a future so fragile that even the world’s glaciers are no longer permanent, Tidwell explained.

“Blood Glacier” follows a growing trend toward telling creative stories about climate change. Fiction or nonfiction, stories about melting glaciers or coastal towns threatened by rising seas could offer a more emotional or engaging understanding of a warming world that science traditionally has not provided.

Discovering the Right Story to Tell

Matthew Tegelberg’s bookshelf is filled with climate fiction. The associate professor in the department of social science at York University spoke with GlacierHub on the growing body of climate fiction and the value it has in communicating the climate crisis. “Fiction invites the public into the world of science in ways that it is hard for the scientists to do themselves,” he said.

Tegelberg studies environmental communication, exploring how stories are told to people who don’t care or don’t know that climate change is a real problem. Fiction can inform the ways scientists and policymakers communicate about the climate crisis, he explained. “If science communicators can look at how fiction is done and find ways to build narratives that do the same for nonfiction, then we have a better chance at getting the action we need.”

Tidwell’s article echoes points to research co-authored by Tegelberg on how the media represents glacier retreat — a difficult phenomenon to communicate to the public, given its geographical distance and non-human time scale. The Emmy-award-winning documentary “Chasing Ice” is successful in this, Tegelberg explained. The film follows National Geographic photographer James Balog as he documents the effects of global warming on glacial ice using time-lapse photography. 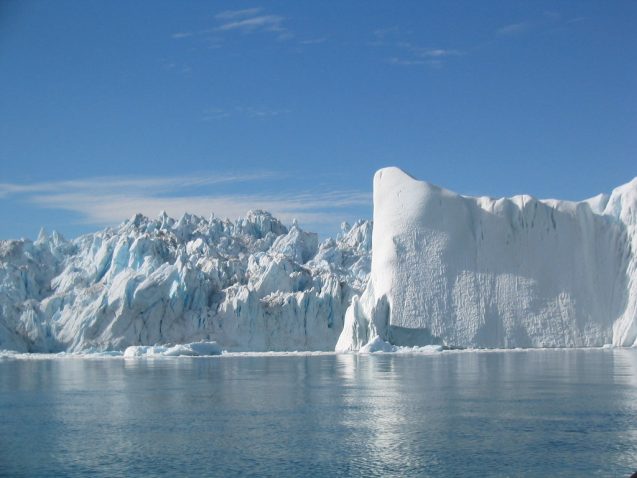 The Jakobshavn glacier in Greenland was featured in the “Chasing Ice” documentary about glacier retreat. Credit: Spencer and Carole/Flickr

Stories about climate change often lean on what Tegelberg called “icons” of climate change, like a lone polar bear balancing on a melting iceberg, which distances the public from this reality due to how often this image is shared in mainstream media. Using time-lapse photography, however, brings an audience up close to the real impacts of a warming world, showing how much geological time is eroded from just a few hundred years of human activity.

But how do these creative climate stories, horror films and documentaries, turn into meaningful real-life action?

“Link them to lived realities,” Tegelberg answered. “We need to scale [stories] down to the local level and think about how these larger [climate] concepts are making their way to the community level.”

Far from the Austrian Alp sits Asbury Park, New Jersey — the setting for David Eisenhauer’s storytelling and research. The researcher from Bennington College focuses on telling future stories about the coastal city to inform possible solutions to climate change impacts, like sea levels that are rising partly due to melting glaciers.

Asbury Park, which has a history of racial segregation and housing inequality, has experienced a recent upswing in development where luxury condos and fancy restaurants have moved in along the coast, pushing out low-income, minority residents, Eisenhauer explained to GlacierHub. One future climate story in Asbury Park imagines coastal flooding on the beachfront, making housing further off the coast more desirable and pushing low-income, minority residents further west and out of the city, he explained. 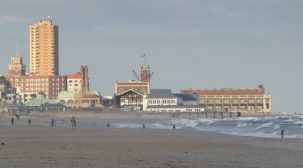 Climate storytelling can imagine a more desirable future for Asbury Park that attends to its history but addresses current concerns people are facing in the community. This story can impact how decision makers design a just and sustainable future in the coastal city.

But what does it mean when these future stories aren’t so hopeful?

Climate Storytelling in an Uncertain Future

In the final few minutes of “Blood Glacier,” the main characters escape their research base in a helicopter, speechless and terrified. The climate disaster is far worse than they had imagined and an uncertain, grim future lies ahead.

In fiction there’s a danger in sensationalizing climate change, Tidwell explained, comparing “Blood Glacier” to Roland Emmerich’s “The Day After Tomorrow” — a 2004 film about a paleoclimatologist who warns the United Nations about superstorms but is largely ignored. In the film, a mega-hurricane sucks frozen air from space and literally chases the movie’s characters.

“Emmerich was really trying to say something [about climate change], but the [public’s] reaction was ‘That’s ridiculous, it’s not going to happen like this,’” Tidwell said. While eco-horrors could make climate change harder to take seriously, expecting it to offer real solutions to the crisis is asking the genre to do too much, she explained. “Blood Glacier” acknowledges that climate change is scary and evoking that emotion is what it can do uniquely well.

Eco-horrors also ask audiences to imagine new kinds of relationships between humans and the natural world, which can be both productive and valuable for climate communicators, Tidwell added.

The documentary “Chasing Ice” does something similar, raising questions about how the media can expand its own relationships with whose story it tells, like dedicating more resources and time to frontline communities that may not have access to time-lapse photography to tell their own climate stories, Tegelberg added.

Eisenhauer’s work also highlights new relationships in its storytelling, connecting the dots between the historical past, the present issues people are facing in Asbury Park, and the possible futures that they can work towards. By helping residents tell their own stories, this work helps them advocate for a more equitable city, he added. “Stories don’t solve everything, but having a story that makes all of these connections is really important,” he noted.

Whether it be eco-horror, a documentary, or nonfiction, storytelling “is about experience and emotion—the things that traditional science says we aren’t supposed to include,” Tidwell concluded. “It can’t do everything, but whatever it is doing, you get to feel that.” 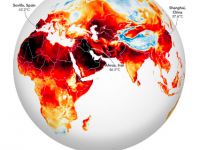 Summer Heat Waves Caused Several Glaciers to Collapse
Subscribe
Login
0 Comments
Inline Feedbacks
View all comments
wpDiscuz
0
0
Would love your thoughts, please comment.x
()
x
| Reply
This website uses cookies as well as similar tools and technologies to understand visitors' experiences. By continuing to use this website, you consent to Columbia University's usage of cookies and similar technologies, in accordance with the Columbia University Website Cookie Notice.Close