Scientists, speaking at the American Geophysical Union Fall Meeting in New Orleans this month, reported that a critical section of the keystone Antarctic glacier, Thwaites Glacier, will likely collapse in the next five to ten years. The research, led by Erin Pettit of Oregon State University, predicts that the Thwaites ice shelf will break apart within the next decade because of startling increases in surface fractures and rifts. Up until now the floating section at the outlet of Thwaites Glacier into the ocean, called the ice shelf, has been relatively stable, but the scientists say it could “shatter like a car windscreen.”

Thwaites Glacier is one the largest Antarctic glaciers, comparable to the size of Great Britain or Florida. Meltwater from Thwaites alone is responsible for 4% of global sea level rise, leading it to receive a great deal of scientific attention in recent years. Researchers have already observed dramatic changes to the glacier, including a doubling of its speed in the past three decades, but scientists are warning the worst is yet to come. 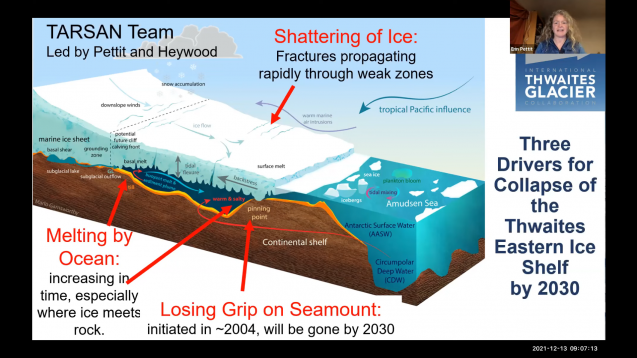 Fractures that span more than 40 kilometers across nearly the entire ice shelf are the most pertinent sign of impending collapse. At Thwaites Eastern Ice Shelf, there were no obvious crevasses at the surface, but radar techniques used to penetrate to the ground revealed a zone of thin ice marked by crevasses at the glacier base, which critically weakens this part of the ice shelf. The fractures are likely to extend to meet with areas of weak ice, which would initiate further rifting of crevasses in a “zig-zag” pattern, as mapped by the scientists, ultimately leading to the complete breakup of the ice shelf.

At present, the eastern sector of Thwaites Ice Shelf flows at about one-third the speed of the western sector, because its ice is held in place by contact with an offshore underwater mountain, termed a ‘pinning point,’ which restricts the flow in this region. However, new data from GPS stations positioned on the ice shelf indicate that ice is beginning to route itself around the mountain, which will cause it to fracture and break apart quicker. Thwaites Eastern Ice Shelf is losing its grip on its pinning point, with great implications for the ice currently held directly behind it.

The nickname ‘Antarctica’s doomsday glacier’ is given to Thwaites because if the ice shelf collapses, the glacier and the enormous volumes of ice upstream that funnel into the glacier will no longer be restrained from accelerating into the ocean. “It is the potential long-term effect on the rest of the grounded ice sheet that we need to consider,” explains Anne Le Brocq, a senior lecturer in physical geography at the University of Exeter. If the entire glacier were to melt then global sea levels would rise by 65 centimeters, or about two feet. If Thwaites Glacier, and other critical neighboring glaciers such as Pine Island Glacier, cannot hold back the West Antarctic Ice Sheet, which holds the equivalent of 3.3 meters (10.8 feet) in sea level, then it could affect coastlines across the world. 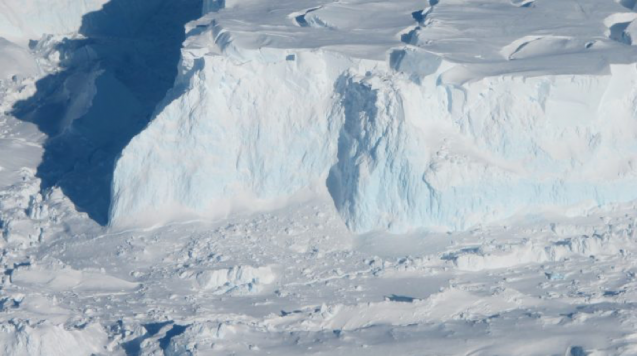 “Despite being far away, the poles and their changes have and will control the climate on our planet, and hence our own society,” says climate scientist Marco Tedesco of the Lamont-Doherty Earth Observatory and Columbia University’s Climate School. “The collapse of Thwaites can catalyze sea level rise, therefore accelerating the damage to our society by climate change,” he adds.

Tedesco further explains that melting of the glacier and its ice shelf is worrisome because it will add freshwater to the Southern Ocean which will have “strong repercussions on currents and ocean circulation.” In the northern hemisphere, “increasing melt from the Greenland ice sheet may disrupt the ocean circulation that brings warmer weather to Western Europe and Eastern USA,” says Le Brocq. “The global reach of these changes in the polar regions brings them to the forefront of climate change science.”

The research involved a combination of satellite data, ground-penetrating radar measurements and GPS measurements. Satellite techniques were able to pick up on the acceleration of ice in the region along the fracture zones. Many of these observations are incorporated into computer models which scientists are using to further understand and predict the current and future behavior of the ice shelf.

Shining a spotlight on Thwaites Glacier is the work of the International Thwaites Glacier Collaboration (ITGC), an intense five-year study program by US and UK researchers. Its $50 million funding is jointly awarded by the US National Science Foundation and the UK Natural Environment Research Council. Each Antarctic summer, teams of scientists are heading south to collect data from the air, sea and land in order to place Thwaites under close examination. This year’s team are currently in quarantine in Patagonia before making the final leg of their journey to Antarctica. With several research seasons left in the ITGC program, continued monitoring of the ice shelf disintegration will take place and will be reported back to world leaders. 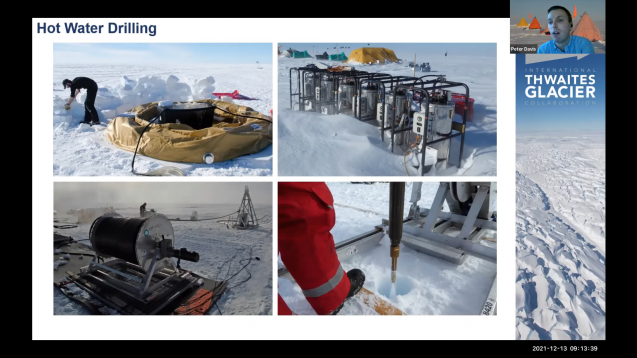 It is not only the fracturing and breakup of ice that is worrying scientists, but the warming of ocean temperatures, which is melting the ice shelf from below. Much of the West Antarctic Ice Sheet is grounded below sea level, which means that as the glaciers retreat inland, more ice is exposed to warm ocean waters. This shift is causing great concern because melting from below is also loosening Thwaite’s grip on its pinning point, causing the glacier to become more unstable. Intensive work has been done to better understand the ice-ocean interaction in the region by boring holes hundreds of meters deep through the ice and by deploying submersible robots to dive under the ice shelf and collect data autonomously.

The loss of these major ice sheets, especially in conjunction with increased melt from the Greenland Ice Sheet, has the potential to transform the climate as we know it, “changing our society much faster than we can imagine,” warns Tedesco. Drawing on his research on economy and climate impacts, Tedesco indicates that “sea level rise acceleration in conjunction with floods, extreme events and precipitation are already taking a toll on the most socially vulnerable populations as well as on financial assets or related estate.”

The findings presented this week are yet another catastrophic blow to the fate of this crucial Antarctic glacier. As the Antarctic research season is just beginning, it will be striking to see what changes are reported from Thwaites Glacier over the coming months.

What Is Blue Carbon and How Can It Help Fight Climate Change?
Subscribe
Login
20 Comments
Oldest
Newest
Inline Feedbacks
View all comments

Brilliant thought provoking piece Lily. Thank you for enlightening the less knowledgeable of us.

#LiquidNitrogen
Freeze the areas that are warm and/ or melting.

The melting of the Antarctica ice shelf looks serious. Three to 5 years is the prediction. For me this should be considered a clear and present danger.

How fast would the shattered glacier actually collapse into the world’s ocean? Could large parts collapse quickly enough to form tidal waves?

If I read this correctly, and based on other comments and research, 3 to 5 years before total collapse, and then melting over the course of the next 3 to 5 years.

It’s “interesting” to see what appears to be happening re. Pettit (and others’) “3-5 years” prediction, especially with the “editorial note/disclaimer” from the ITGC editors: https://thwaitesglacier.org/index.php/news/thwaites-science-discussed-agu-press-conference. To me, a possible explanation may relate to Holland’s finding of the importance of air flow and air temperature over the glacier. Comment?

Also, keep in mind, that the amount of fresh water released from the melting will have devastating effects on marine life that depend on salt water.

The press conference here, watch the video linked at the end:

As far as I understood such an event hasn’t been observed before, a forecast is guesstimating.But it seems clear that a chain reaction will be caused when the first 1/3 of Thwaites starts to move, nearby glaciers will then start to move as well.
The domino effect which a sudden rise of the Antarctic sea level will have caused by Thwaites on all other glaciers in a similar position as Thwaites is not mentioned but worth thinking about: all other glaciers held in place by such submarine rubble banks will be lifted over their ‘break pads’, their ‘wedges’ due to the rise of the sea level.And this means a very,very sudden increase in sea level.And in cosequence a shift of the magnetic poles.
In short:when Thwaites goes down all others will do so as well.

I have the same question. Would love to know what I can do to help. Little things add up.

Ultimately we need 2 things.
Great pressure on legislators, making it a campaign issue at every level so it costs politicians their job to ignore it

Hit corporations in the pocket book so they make less money if they ignore it. The court of public opinion through shame, boycotting and disinvestment

It’s all about money and working America enables the economy that they profit from.

I am an American, not much hope here. If you have seen the movie Don’t Look Up, that is the attitude.
Right now it is all about bombs and fuel, a pretty sad state of affairs for the planet.

Eat drink and be merry and don’t think about it

1. Eat less beef
2. Invest in companies that prioritize sustainability corporations (401 k and such)
3. Buy local
4. Educate climate deniers. When you see an ignorant social media post follow up with links to the best science you can find. Then walk away arguing is not worth you time.
5. Visit your local politician and federal representative, repeatedly, until they realize this is urgent.

There is no cure from capitalism.Ignore climate deniers, there are better things to invest time.Ignore the representatives of the existing system.Organise resistance.

Strike every Friday with the students.Boykott fossil fuels,don’t nuke the planet.And move to higher lands.

Hello! I am Katty from Chile, I was reading what happened and it will be catastrophic. How much time do we have left before the great disaster? because the authorities do not inform the countries that will be affected.

Read the press conference and watch the presentation video linked at the end:

We are stucked with incompetent authorities all over the globe.

Thanks for the great work and top-presentation.
The work of Pettit et al. is mentioned in local magazines but the penny hasn’t dropped with the masses who are distracted with Covid and war and hardly get directed by the media to the root of these problems.

The Ukrainian IPCC scientist Krakovska called last week during a webinar organised by the Friends of the Earth(FOE) for an end to “fossil fuel proliferation”.The Guardian noted her existence today but didn’t dare to repeat her call, the Rockefeller foundation on who’s paylist the Guardian is wouldn’t like this:

Keep up the good work,

I was hoping to see a statistical probability assigned to the collapse “within 5-10 years.” Is it possible to produce such a figure that is meaningfully accurate? Dana Beach Charleston, SC