Understanding the number and location of people living near the coast at low elevations — the area known as the low elevation coastal zone (LECZ) — is necessary for policy makers and communities preparing for and adapting to impacts from sea level rise caused by climate change. The number of new data sets that can be used to estimate these population and areas at risk — including elevation, population, and location and type of human settlement information — continues to grow as more satellites and other sensors are launched, more organizations develop the capacity to produce and disseminate data, and more advanced methods allow for rapid analysis of high volumes of data. While new and more datasets is generally a positive development, they must be used with a critical eye so that new or divergent conclusions that may arise are well understood. Climate scientists have long appreciated this, and use multiple models to understand uncertainties in predicting phenomena — for example, in weather forecasting. When it comes to estimating the number, location, and type of settlement living in low lying coastal areas, a similar approach is needed.

To address this gap, a new paper published in Earth Science System Data uses new inputs of data on coastal elevation, spatial population data, and spatial depictions of urban areas to better estimate the population living at risk of rising sea levels. It establishes the importance of assessing LECZ data quality in research and policy making, by using a sensitivity analysis — establishing a full range of estimates of all data set combinations that reveal their strengths and weaknesses — and recommends “fitness for use” guidelines for applying these datasets in the evaluation of exposure in the LECZ. 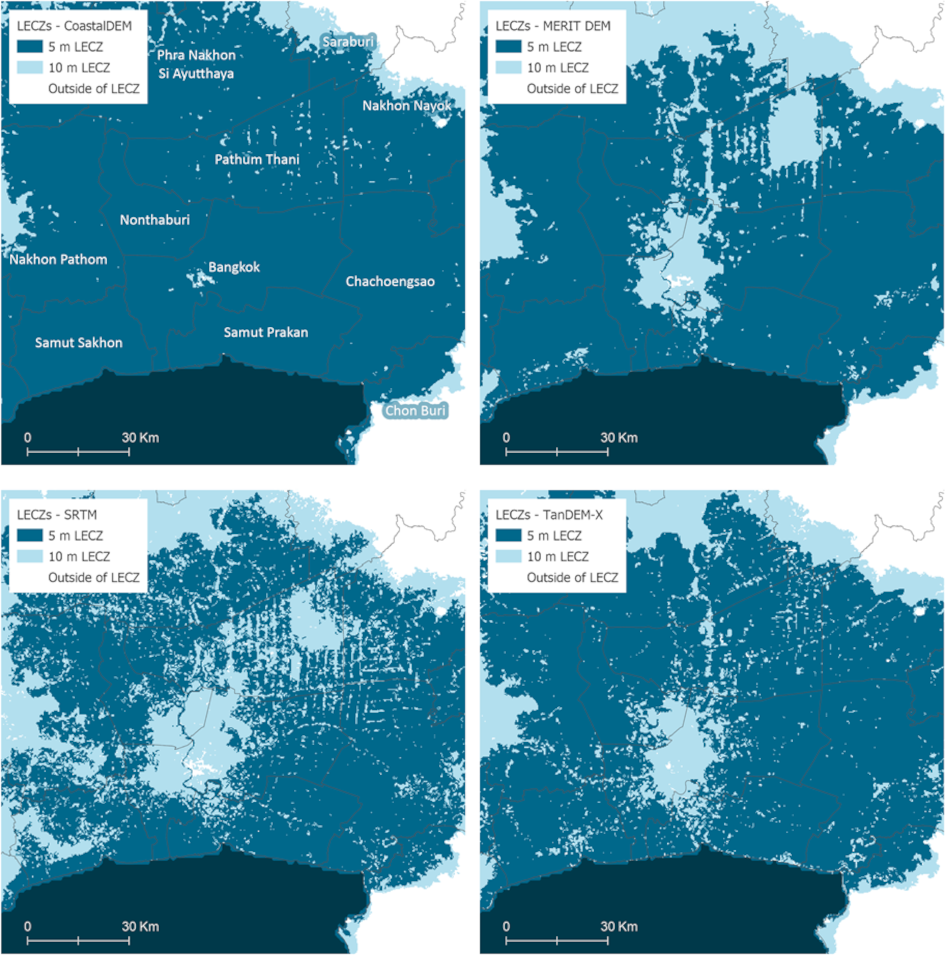 The LECZ is measured as land areas connected to the coast at ≤ 10 meters elevation or ≤ 5 meters elevation, but each of the four data sets evaluated in the study reveal somewhat different areas at risk, as shown in the image above. 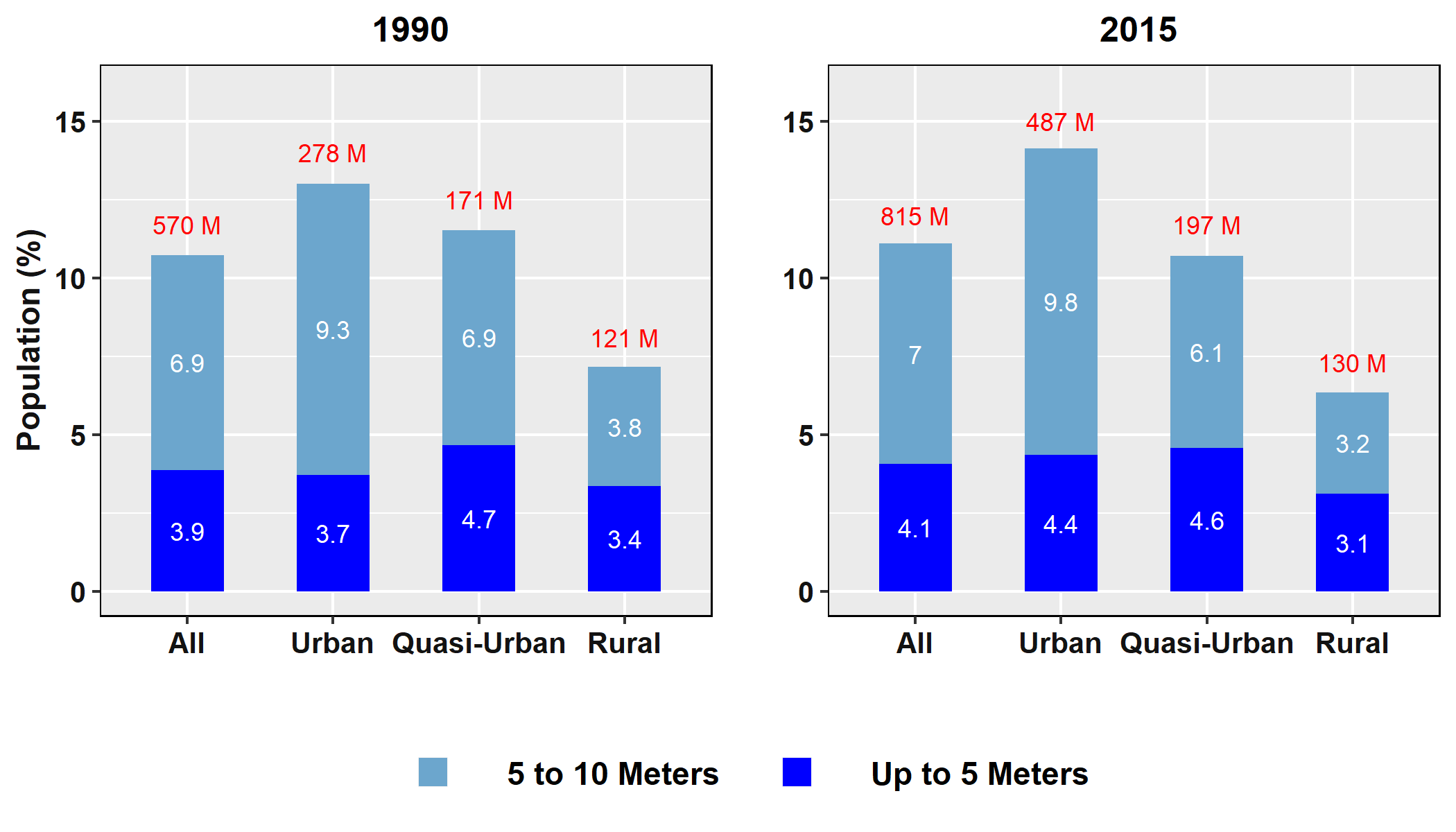 In the comparison below, we see that one LECZ data set shows more people live in the ≤ 5 meters LECZ , while three other data sets show that more than half the population of the LECZ lives between  5 and 10 meters above sea level. This demonstrates how critical data choices are in arriving at an accurate understanding of the risk to populations living in the LECZ. Importantly, regardless of which data set combination is used, the study finds agreement among data sets that the built up area and population in the LECZ has grown faster than that outside the LECZ, since 1990. These findings have important implications for coastal policy and management, and consideration of coastal hazards and sea-level rise and their impacts and risks. 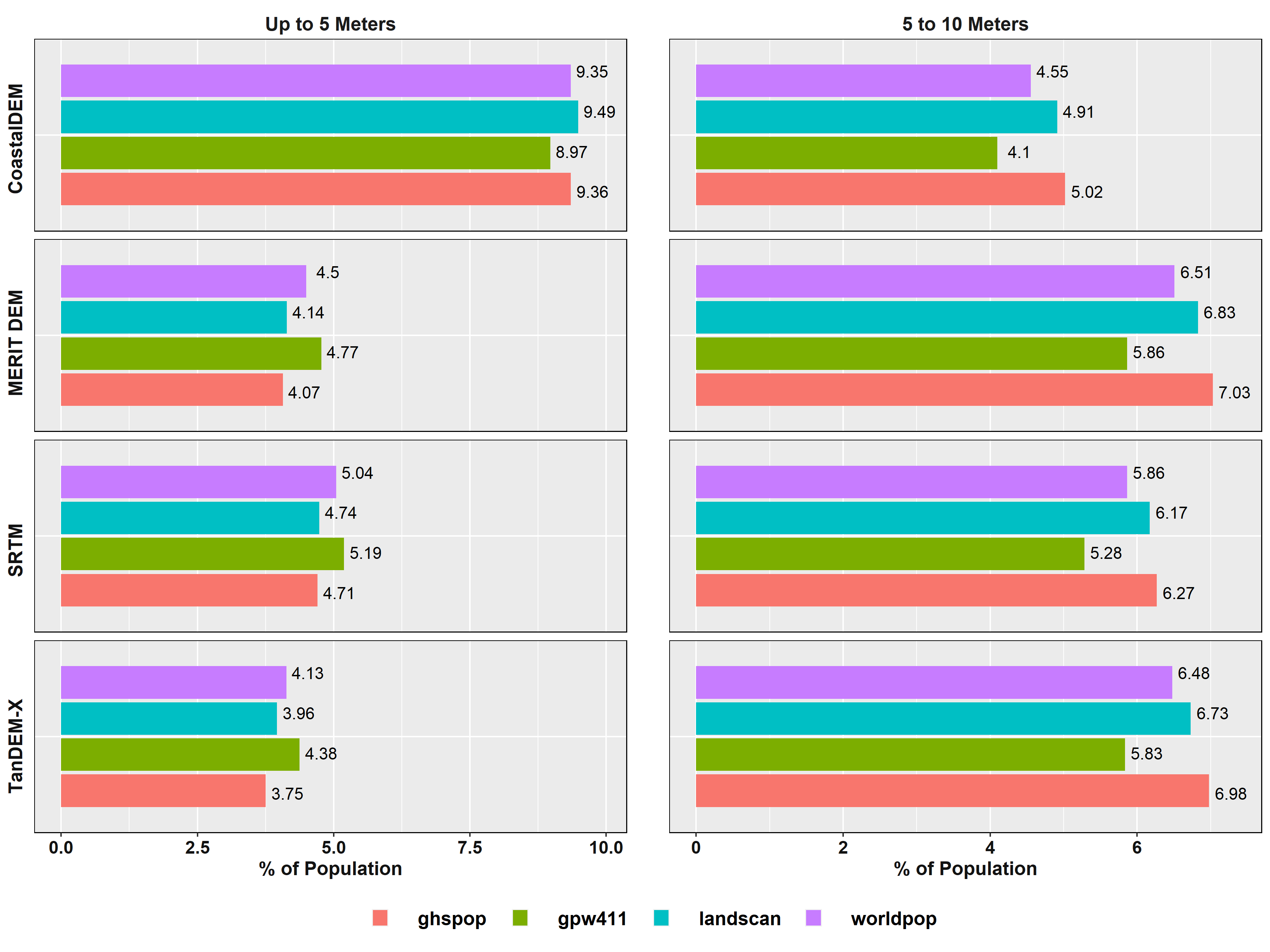 The paper discusses many of the challenges of working with broad-scale coastal data, and makes practical recommendations for continuing this work. It was a collaboration between Kytt MacManus and Rya Inman of CIESIN; Deborah Balk, of the City University of New York Institute for Demographic Research (CIDR); Hasim Engin, formerly of CIDR, now CIESIN; and Gordon McGranahan of the Institute of Development Studies, University of Sussex.

The data, which contains land areas with urban, quasi-urban, rural, and total population counts within the LECZ for 234 countries and other recognized territories for the years 1990, 2000, and 2015, update and extend the first-ever estimates of population and land area in the LECZ, undertaken more than a decade ago.

Contributors to this blog post include Kytt MacManus and Hasim Engin, CIESIN; Gordon McGranahan, Institute of Development Studies; and Deborah Balk, City University of New York, Institute for Demographic Research. The data and source code underlying this new research is disseminated by the NASA Socioeconomic Data and Applications Center (SEDAC), in collaboration with the City University of New York (CUNY) Institute for Demographic Research (CIDR).