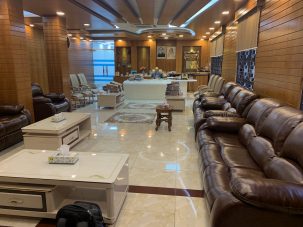 I spent the past week in Dhaka, the capital, in numerous meetings with colleagues and partners, limited only by the terrible Dhaka traffic. Two events stand out. I traveled north to Gazipur to stay with my colleague of over 20 years and primary partner in Bangladesh, S. Humayun Akhter. Last summer he became vice-chancellor of Bangladesh Open University, the seventh largest university in the world. The vice-chancellor is the equivalent of the university president in the U.S., as the chancellor is a ceremonial position. He now has an enormous office and residence, where I stayed with him. 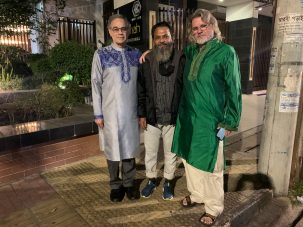 Chris and I pose with Babu, who drove us to the wedding, in our punjabis.

The real highlight of the week came on the last night, when Chris Small, now arrived to join me, and I attended Nafis Sazeed’s wedding reception, my first in Bangladesh. Nafis is a graduate student at New Mexico Tech and part of a project that will bring me back to Bangladesh in March — using electromagnetic tools to map saline and fresh groundwater. We have many times spoken by Zoom and email and I am on his thesis committee, but due to COVID this was also the first time I have physically met him. As it turned out, Humayun was also at the wedding.  Georgina, his now wife, as well as Nafis, were students at the Department of Disaster Management at Dhaka University. Humayun was invited by her. 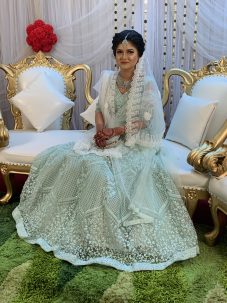 Georgina in her wedding dress posing for pictures.

Early the next morning, we set out for southern Bangladesh, where I will spend the rest of this trip.  I now have nine GNSS stations in this part of Bangladesh, and the batteries at all of the stations appear to have failed. We will change the batteries and see if anything else is amiss that could have caused the problem. These stations are examining the subsidence of the land of the Ganges-Brahmaputra Delta. All deltas sink due to the weight of the accumulating sediments and due to compaction of the sediments. The rate of the sinking is even greater than the rate of sea level rise, greatly exacerbating the problem in this densely populated, low-lying land. However, here the Ganges and Brahmaputra Rivers still bring an enormous supply of sediments to fill in the newly created space. As a result, Bangladesh is still gaining land, but due to the shifting positions of the rivers, some areas get sufficient sediments while others are facing problems due to a lack of sediments. 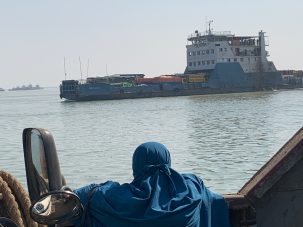 This investigation is currently supported by the Bangladesh Water Development Board as part of the “Long Term Monitoring, Research and Analysis of Bangladesh Coastal Zone (Sustainable Polders Adapted to Coastal Dynamics)” project. In Bangladesh, they use the Dutch term polders for the embankments protecting coastal islands.

In addition to Chris, who will be validating his remote sensing observations, Sanju and I are joined by five others. Masud Rana and Sharmin (Pinky) Akhter from Dhaka University will be servicing the RSET-MH (Rod Surface Elevation Table – Marker Horizon) equipment that we installed with the GNSS in 2019. These devices measure the elevation change and sediment accumulation. The difference gives the shallow subsidence above the 80-foot depth of the rods at the sites. The GNSS, on the other hand, measure the deep subsidence, but miss some of the shallow subsidence due to the foundation of the buildings that they are installed on. The combination is a very powerful way to understand the dynamics of the delta. This work is the basis for their master’s theses. 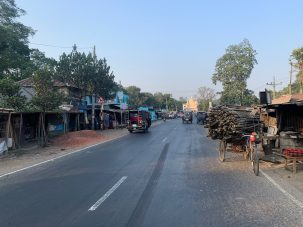 A typical scene along the “highway”. Most are one lane in each direction and not limited access. We share the road with trucks, buses, cars, autorickshaws, rickshaws, lagunas, bicycles trucks and more, continuously passing slower vehicles.

We recently published a paper on our results to date here. In addition, Pinky has brought another female student with her, Tanjina Fedous Ira. Finally, two employees of the Institute of Water Modeling, one of our partners in this project, are also coming along for the land part. Sheikh (Nahid) Nahiduzzaman and Upal Mahamud are along to be trained in our methodology and equipment as part of the technology transfer part of the project.  Nahid was also with us in 2019. The two of them will visit New York and Louisiana for further training in April. 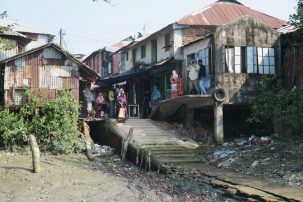 Chris standing at the ferry ghat (dock) photographing us climb the Khepupara tide gauge to temporarily install a campaign GNSS.

There are two ferry crossings of the Padma River, as the combined Ganges and Brahmaputra are called — one at Mawa, south of Dhaka, and one at Aricha, near the confluence of the three rivers. Although Mawa is closer and a shorter overall drive, the drivers elected to cross at Aricha because to the heavy delays at Mawa. While, this route will be overall time-saving, we did not arrive at Kuakata on the coast of the Bay of Bengal until 9 pm. Stopping at Barisal University, we picked up my colleague Hasnat Jaman and one of his students. 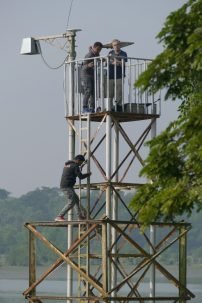 We climbed the metal structure, put the antenna at the near end of the arm holding the radar water level gauge, and set up the receiver and solar panel.

Now we could begin work on the sites. We headed back north towards Barisal, stopping at two sites on the way. Masud and Pinky’s team would service the RSETs and Sanju and my team would do the GNSS sites. The RSET team was worried about completing all their sites and making it to Barisal, so they left at 7 am. We followed more leisurely after an 8 am breakfast. Since we have a campaign GNSS kit with us, we stopped at the tide gauge near the GNSS site at Khepupara. We originally put the GNSS here to be close to the tide gauge, which showed irregular and sometimes high subsidence. On my last trip here in 2019, we welded a monument pin to the tide gauge. Now, we will put a campaign GNSS here while we work on the continuous site. After a few phone calls for permission, we used a ferry boat to go to the steel structure and it set up, hoisting the equipment by rope. GNSS recordings of the signal bouncing off the water will allow us to determine the offset of the local datum for measuring the tides from mean global sea level. 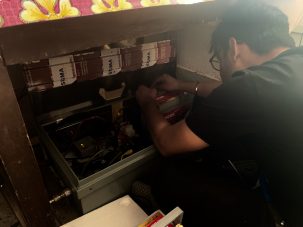 Sanju diligently working on the receiver at PSTU (misnamed PUST). We eventually got it repaired and working, although it took much longer than expected.

We then went to the continuous GNSS at a local weather radar station. Other than the batteries being dead, everything seemed to be in working order. The logs looked like it slowly failed last summer.  The likely explanation is that with days of rainy and cloudy weather, the solar panel could not recharge the batteries. The battery charge was drawn down enough to damage the batteries. A quick call to Keith Williams at UNAVCO in Colorado confirmed everything was in working order. We packed up, recovered the campaign kit from the tide gauge, and headed north feeling confident.

We stopped for a relaxed lunch, instead of the snacks we often had on the road, and arrived at our second site at Patuakhali Science and Technology University and went to work. We changed the batteries, flipped the switch and … nothing. After much testing and some false starts, we determined the solar charger had failed and we replaced it. Now we had power, but the modem wasn’t able to connect to the network. Luckily, we had another spare modem and changed it as well. With running up and down from the fourth floor office hosting the receiver, I got lots of exercise.  Finally, we installed a new grounding rod as the copper rod was stolen and we were done. It took us four hours. By the time we finished, the RSET was long settled in the hotel in Barisal. We were the late team. Sanju and I finally had dinner at 10 pm.