After a series of storms dumped unprecedented amounts of rainfall on the northwestern corner of Washington last November, small communities in the Nooksack Valley were left severely flooded and asking questions about how to prevent flood damage in the future. But finding a solution to flooding isn’t easy. The region is home to a diversity of stakeholders, including Indigenous tribes, community leaders, gravel-extracting firms, and agricultural landowners, whose interests, such as protecting fish habitat, commercial business, and private property, often come into direct conflict with flood prevention measures.

The winter storms were generated by a series of atmospheric rivers — long, narrow regions in the atmosphere that carry water vapor from the tropics. When these rivers reach land, they can dump heavy amounts of precipitation in localized regions. In November, Whatcom County, where the Nooksack River drains into an extensive valley, sat right in the bullseye of an atmospheric river. It recorded a rainfall of about 13 inches. Nearly six of those inches fell in just three days, causing the river to overflow into nearby areas. Damage from the floods could cost as much as $50 million, according to Whatcom County officials.

The solution may seem simple. A deeper river would carry a greater volume of water downstream, mitigating overflow during extreme precipitation events. This would require dredging the river by removing gravel and sediment from the bottom of the channel. But dredging can have devastating impacts on the watershed’s ecology, destroying habitat for salmon species — an important natural and cultural resource for the local Lummi Nation and Nooksack Indian Tribe who hold treaty rights with the State of Washington to harvest and co-manage salmon stocks on the Nooksack River.

The Nooksack begins as three rivers: the North Fork, Middle Fork, and South Fork, which originate from the high peaks of the North Cascades. The North Fork picks up icy glacial snow melt and receives input from the other two forks in the Cascade foothills, sweeping across a broad floodplain in Whatcom County’s lowlands and continuing west into Bellingham Bay and Puget Sound. Along its way, the river transports large amounts of sediment that derive from glaciers on the north side of Mount Baker. The Nooksack River’s annual sediment load is 1.4 million tons — the second-largest amount of all the rivers draining to the Puget Sound region, according to the United States Geological Survey. 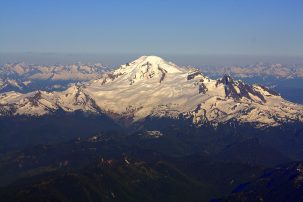 For almost half a century, the Nooksack River was commercially mined for gravel for use in construction, primarily downstream between the towns of Lynden and Everson. But mining ultimately came to a halt in 1997, due to concerns from the local Indigenous tribes that mining had detrimental impacts on fish habitats. In the wake of the recent floods, the idea to remove gravel from the river to mitigate flood risk has resurfaced. Some farmers and property owners in the Nooksack Valley, for example, believe gravel removal to be an effective method to lower or maintain the river bed and stop their land and property from filling with flood water every winter.

In a community meeting in the town of Everson on November 24, a week following the devastating floods, local county officials sat on a stage at the Nooksack Valley High School to listen to community members, some of whom had lost their homes and businesses. “There are people who cannot go home tonight because they do not have a bed to sleep in. There are people who cannot go home because they do not have a house to go home to,” one community member said. Although local leaders tried to keep the discussion centered around short-term solutions to the flood, dredging dominated the conversation. “We’ve got to dredge the river. Stop screaming ‘climate change’ when you haven’t dredged the river,” another community member demanded, eliciting cheers from the crowd behind them. Although the meeting concluded with a sense of gratitude for volunteers who were helping in the region’s recovery, many questions about flood prevention were left unanswered.

But even if the river was dredged, too much sediment is transported down the river each year for it to be effective in preventing floods, Oliver Grah, who is the water resource program manager in the Natural and Cultural Resources Department for the Nooksack Indian Tribe, told GlacierHub. Sediment and gravel accumulation will likely increase with climate change. When glaciers retreat as temperatures rise, more material is exposed, which accumulates downstream, piling up in the river bed and contributing to flooding, he added. “[Dredging] is a huge cost with almost no effectiveness.”

On December 7, former Whatcom County Council Member Rud Browne, whose term ended this January, introduced a resolution in a Whatcom County Council Natural Resources Committee meeting. Browne proposed removing sediment from the dry uplands meander zones of the river. The project would include digging holes above the waterline that could stop overflow during a flood, Browne explained in an interview with GlacierHub. The water holes would then theoretically replenish the river during dry summer months when river flow is much lower, he added.

But his resolution was quickly tabled by other council members who requested further input from the tribes and county flood and river staff. According to Browne, this was because “people often get lost in the issue of dredging” although he emphasized this is not a dredging proposal, but something entirely different. Although digging holes would require removing vegetation and gravel from around the river habitat, he says it would not have the same impact on fish habitat that dredging would, which includes removing gravel and sediment from below the waterline.

In a letter to the Whatcom County Council prompted by Browne’s resolution, the Lummi Nation disapproved of any sort of gravel removal. “To be clear, the Lummi Nation has not been consulted on the proposed resolution,” the letter stated, asking that plans for long-term flood management take on a cooperative approach based on “sound science” that is informed by “indigenous insight.”

“The best way [to prevent flooding] is to remove or move back all flood control structures so the river can go back to its historic floodplain,” Grah explained. Trusting the river ecosystem to also mitigate its own flooding, as long as it is given the space and ability to do so, could benefit every stakeholder involved, he noted. One example includes replanting areas that were previously logged for commercial forestry along the watershed, which would increase water quality and reduce the risk of flooding by retaining more moisture in the soil and slowing runoff following heavy snowfall and rain events.

Dartmouth College Ph.D. candidate Grant Gutierrez echoed this sentiment. Gutierrez, who studies the Skagit River just south of the Nooksack, explained that over the last 150 years, settler colonialism has altered flooding, whether by removing log jams and large woody debris that impact river flows or by installing levees, dikes, and dams that alter the river’s configuration. When early settlers in the late 1800s and early 1900s developed the areas around the Nooksack for agriculture, its valley was transformed. The land was cleared for farming, forests were logged for timber, and the river was straightened. These modifications only made flooding worse. But humans still rely on a fantasy that they can “solutionize” their way out of flooding, Gutierrez added. 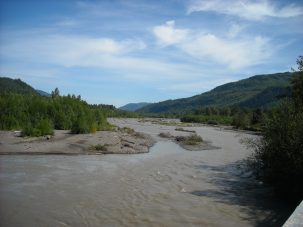 Warmer air holds more water, increasing the intensity of rainfall during atmospheric river events. This intensity will also grow as the region’s dynamics change, Guillaume Mauger, a research scientist at the University of Washington Climate Impacts Group, explained in an interview with GlacierHub. For example, a recent analysis from the Lawrence Berkeley National Laboratory projected that annual snowpack in the Cascade Mountains could decline by nearly a quarter by 2050 and up to nearly three-quarters by the end of the century. As snowlines recede up the mountains, more areas will receive rain instead of show, which runs off more quickly, exacerbating the flooding. The November event showed that Washington communities are not well adapted to the current climate or the future climate, Mauger concluded.

Despite his resolution being tabled, Browne hopes future flood management in Whatcom County can be approached with an open mind. “There is an old saying that the definition of insanity is continuing to do the same thing but expecting a different result,” he concluded. “We are only going to solve these problems with a willingness to discuss every option.”