New research shows that populations of a critical marine mammal species are smaller than previously thought. Weddell seals are one of the most well-studied marine mammals because of their importance to the Antarctic ecosystem, but a new estimate of their population suggests that there are only thirty percent of what was once suggested.

Weddell seals are found around the Antarctic coastline in land-fast ice, where sea ice freezes onto land. Female seals hunt in the water but haul out onto the ice to give birth to their pups during the spring each year, and remain there for months at a time.

Until the recent advent of very high resolution satellite imagery, a large-scale estimate of the Weddell seal’s population was not possible. Similarly, investigating environmental factors that influence their distribution was challenging due to the remoteness of their habitat. 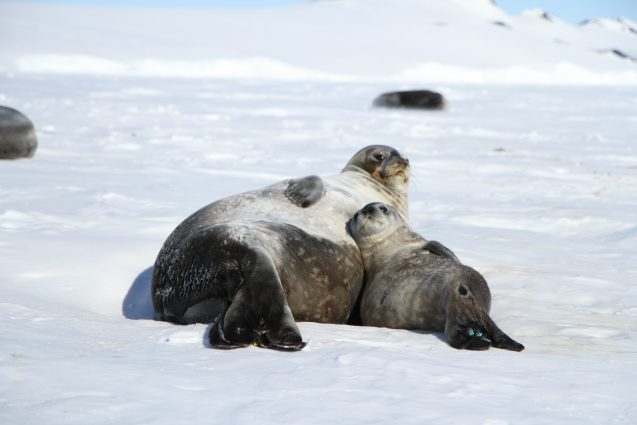 Female Weddell seal and her pup, hauled out on the ice. Credit: Michelle LaRue.

The new study, published in Science Advances in September, uses high-resolution satellite imagery to uncover details about large scale population size and structure of this species, as well as its pattern of distribution. The researchers estimated there were 200,000 adult female Weddell seals in 2011, the year their data were collected, which is far below previous estimates. However, previous work based species-wide population estimates off of small-scale field studies.

“When we got the preliminary results and it was only 200,000 Weddell seals, it was concerning to me. I thought I did something wrong or we had missed something because previous estimates decades ago were on the order of hundreds of thousands,” said lead author Michelle LaRue, an ecologist at the University of Canterbury, in a conversation with GlacierHub. While it may have been reasonable to expect a decrease in the population, prior researchers suggested that there were once four times this many seals. “In reality,” she said, “I think that the 800,000 [estimate] that we used as a benchmark from before was perhaps incomplete as there were a lot of assumptions previous researchers had to make, whereas in this particular case, with our study, we were able to look at the entirety of the coastline in a single year. In other words, our estimate is probably a better benchmark.” 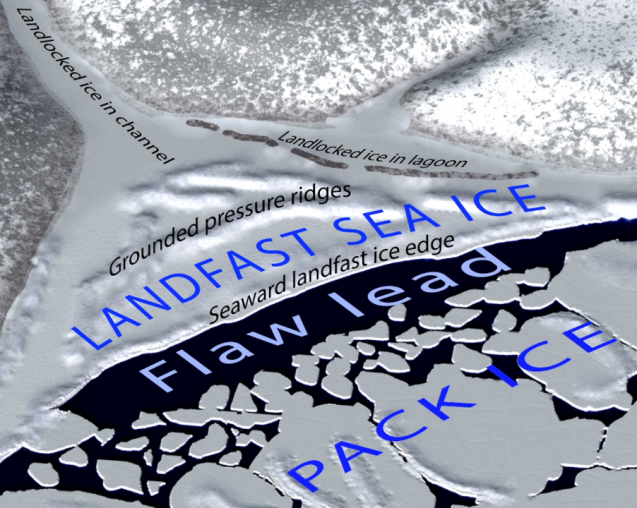 The availability of imagery with 30- to 50-centimeter resolution, about the size of a seal’s head, made the study possible. “The technology has gotten really good,” added LaRue. Because of their size, color and tendency to not cluster together on the ice, counting seals from imagery was feasible. Since the 1960s, scientists have conducted intensive ground-based studies near McMurdo Station, the largest research facility on Antarctica, and these studies provided important validation data to compare against the satellite-based results.

The study revealed that the availability of land-fast ice played a significant role in the seals’ distribution. In Victoria Land, an area in Antarctica bordering the Ross Sea that is a known Weddell seal hotspot, the number of seals spotted in the north has decreased remarkably from nearly 2,000 in the 1970s, to only four in 2018. The seals are moving south as land-fast ice habitat is disappearing earlier in the summer in more northern areas.

Seal populations were also more likely to be found near glaciers, shorelines, and deep water. Deep water is necessary because it hosts the rich fish populations to prey on. Pressure caused by moving glaciers causes cracks to develop in land-fast ice, allowing the seals to enter and exit the water, as do fissures that develop as the result of tides cracking the ice along coastlines. A tendency to stay near glaciers may mean the seals have to adapt to the rapid retreat and loss of Antarctic glaciers in the coming decades. 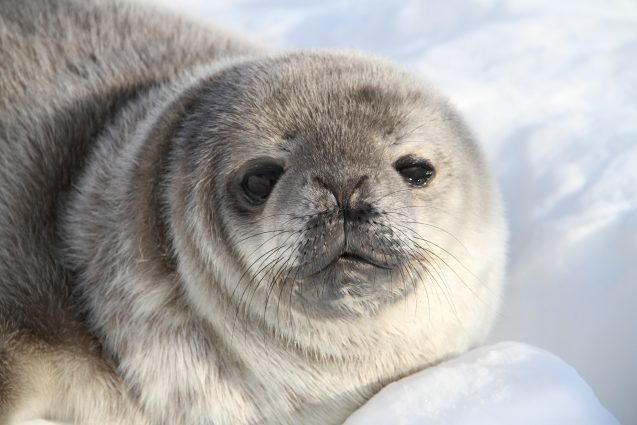 Weddell seals, alongside penguins, are dubbed indicator species of ecosystem change because of their sensitivity to food availability. David Ainley, study co-author and senior ecologist at H.T. Harvey and Associates, explains that “owing to their high-energy lifestyle, they are more sensitive to changed prey availability than are, say, fish. Also, they have less of an ability to search for food than aerial birds, and hence that adds to their sensitivity.”

The marine ecosystems and ice habitats that the species depends on are rapidly changing due to climate change and overfishing. “The polar oceans have to deal with polar amplification. What ends up happening is those places end up warming a lot more rapidly than other places on the planet, so largely that is what is going on with melting sea ice,” LaRue explains. If sea ice patterns change, there will be knock-on effects for seal habitat and the Antarctic food web, which depends on the presence of sea ice.

The Southern Ocean, which encircles Antarctica, is a productive fisheries area for krill and Antarctic toothfish (commonly named in supermarkets and restaurants as Chilean sea bass). Both krill and toothfish are fatty food sources for seals and penguins, so taking these important fish out of the ocean is a big problem. Krill are found under the sea ice, so less sea ice could mean less krill. 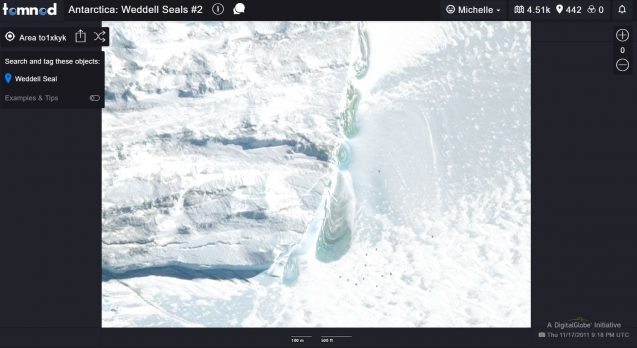 An example of the imagery and software used to count sea populations. Credit: Michelle LaRue.

Counting individual seals from imagery is time- and labor- intensive, so the researchers used citizen science and crowdsourcing to help with this part of the study. Once trained, volunteers can conduct counts on a routine basis and therefore invasive and potentially dangerous field trips to Antarctica to conduct population counts are no longer a necessity. Ainley said that “ground-based assessments are incredibly expensive,” and have limits of logistics, meaning monitoring is often only possible near to research facilities. Transport costs, insurance, risk assessments, navigating the vast, remote ice and using equipment in an extreme environment all make Antarctic fieldwork especially challenging and largely limited. “In order to obtain a regional perspective, which is more ‘true’ than just one colony, this is where high resolution satellite imagery comes into play.”

LaRue highlighted that “what is really exciting is we can do this all the time now. The next step is to analyse the data from subsequent years and look at seals through time.” The new large-scale approach will allow researchers to monitor the entire ecosystem and better address conservation goals, adding key information about the Southern Ocean as it experiences rapid climate change.