Having finished deploying magnetotelluric stations (MT) on land to image the distribution of fresh and saline groundwater along two rivers in Bangladesh, we now turned to a complementary towed TEM (transient electromagnetic) system to improve the imaging. Where the surface and groundwater are fresh has a huge impact on the agriculture. We are also imaging deeper freshwater, below the saline groundwater, which can be tapped for drinking water. 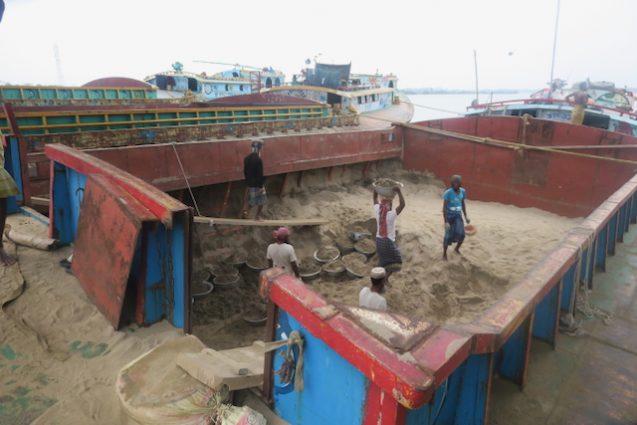 We sailed to a ghat near a bridge to find a vehicle to drive us to the MT station. We tied up next to a sand barge and I got to see the emptying operation of one of the ubiquitous sand barges on the rivers.

Before we started the TEM, we first had to pick up the MT stations deployed the day before. Because of the high winds, my team went to the last site by road. The country boat took us to the nearby bridge with the main road south. There, our guide Romeo hired two autorickshaws to drive our team to the equipment. While the main road was fine, the smaller road along the channel that led to our instrument was pretty bumpy. Eventually, we got there, packed everything up and made it back to the Kokilmoni. Another team picked the other two instruments using the country boat. 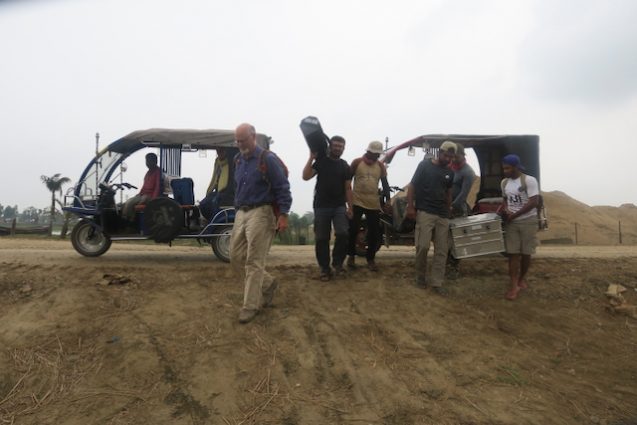 Arriving at our last MT station by auto rickshaw. Mark, Nafis, Biplop, Romeo, and Russell are carrying the equipment.

By the time we returned, Kerry had started assembling the raft that will carry the instruments. There is a rectangular frame made of Kevlar with ropes to tighten it. Coils of wire are wrapped for the transmitter and receiver wires and a smaller receiver will be towed behind on an inflatable kayak. The entire frame is mounted on inflatable boats, tubes and kayaks. Assembling it took the rest of the morning. 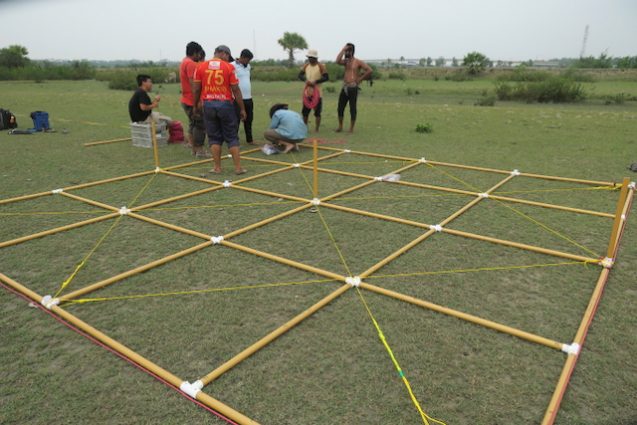 Beginning the onshore assembly of the Kevlar and rope frame that will carry the TEM gear.

We towed it out to the Kokilmoni using the country boat and set up the tow lines. Then the debugging process started. We sailed up the Andharmanik River and started to get a feeling for how fast we could tow it. The round floats tended to flip and had to be secured better. We also added weight with five-gallon jugs filled with water as ballast. We spent the entire day doing this and still hadn’t started the survey, so we were falling behind schedule. 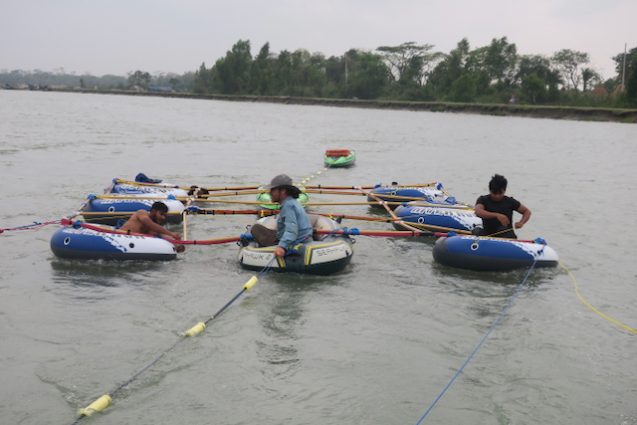 Kerry and crew members adjusting the floats that hold the raft and adding water bottle ballast.

Overnight, the crew went ashore and purchased long bamboo poles. When we towed the Rube Goldberg device back to the starting point of the survey, we stopped and the crew added them to the frame, greatly strengthening it. We started heading north, but now the kayak with the smaller receiver kept flipping over. We added one and then two outriggers with plastic jugs. Finally, a life preserver under its bow kept it from diving under the water. 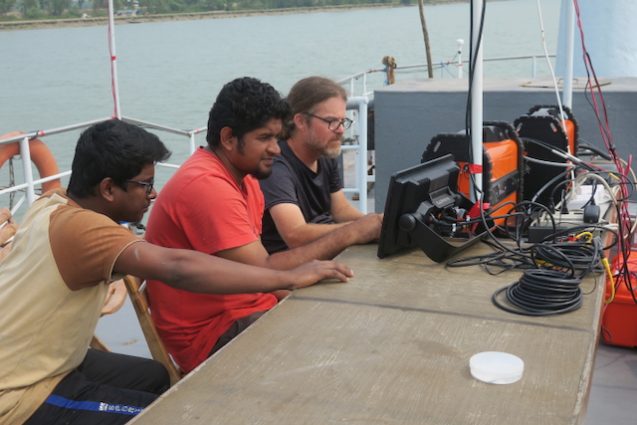 Biplop, Masud, and Kerry monitoring the echo sounder, sidescan, and TEM on the top deck of the Kokilmoni.

Still, fighting the tide, we could not safely tow the system very fast. We found that 5 km/hr was approaching the limit for the speed we could tow it and were mostly going slower than that. Even using my contingency day, it was uncertain whether I could get back to Barisal on time. We didn’t get out of the Andharmanik River and into the larger Tetulia Channel until the late afternoon. It had taken us over a day-and-a-half to build the towed TEM system and get it working. It was collecting good data, but our progress over the ground was very slow. 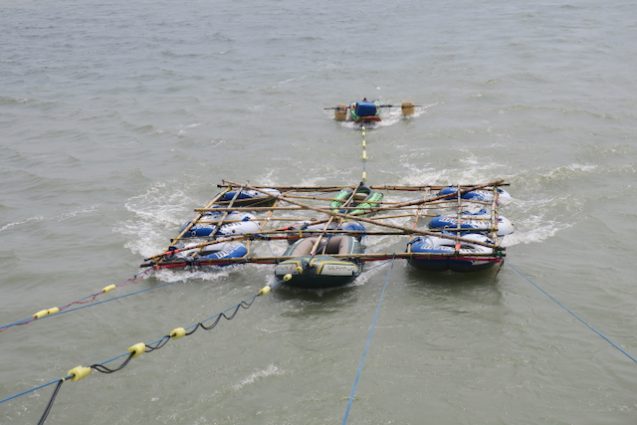 Then things started to change. The larger channel was rougher, but we caught the rising tide and suddenly we were going 9 km/hr. With the following sea we started making up time. At the end of the day, the captain decided to keep going after dark to take advantage of the tide while we could. We headed for a good location to spend the night. 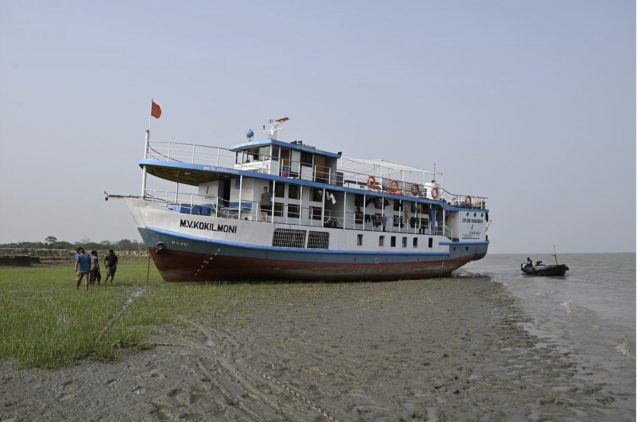 The Kokilmoni beached on the shore at low tide. Tides can reach 3-4 meters here. We were stuck until the tide came in. Photo by Kerry Key

We were almost there when the Kokilmoni ran aground. Parts of the river are very shallow and we hit a submerged sand bank. We spent a tense half-hour keeping the TEM raft safe while trying to maneuver the Kokilmoni to get free. Finally, we did and headed back south to go around this shallow part of the river. We almost made it. 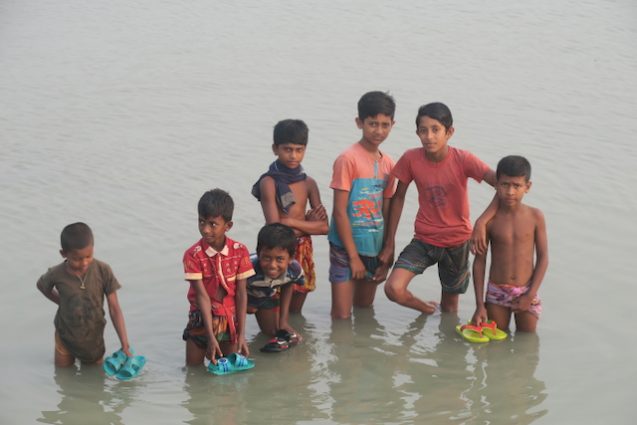 Some local boys staring at our beached boat and the strange raft that we are towing.

A little short of where we had previously crossed to the deeper water, the Kokilmoni had to swerve to avoid a fishing boat. As a result, we ran aground again while going pretty fast in the dark. This time, we were solidly stuck although there is deeper water just a little to our side. We could not get free. Instead, we had to wait for the next high tide in the morning to get free, or so we thought. The two high tides of the day are unequal. We had gotten stuck during the higher tide. The morning tide did not reach a level to allow us to get free, so we had to wait for the evening high tide.  Getting a few extra hours of travel with the tide now cost us an entire day. 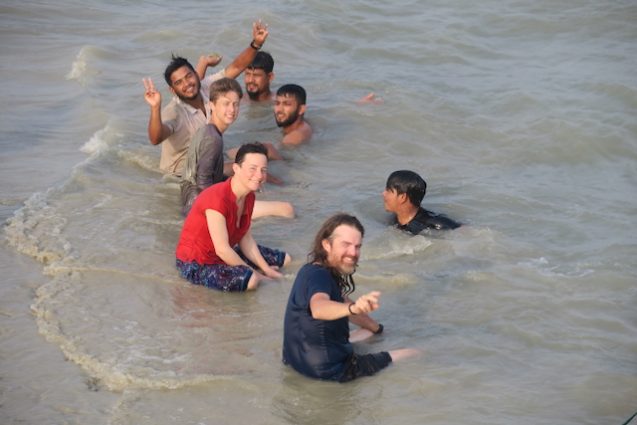 Kerry, Céline, Adrien, Russell, the captain, Marin and others play in the mud and water while we were stuck.

We disconnected the TEM raft for getting the boat free, which happened easily once the water level was high enough. The next morning, we reconnected everything and restarted our voyage north. Because we had lost so much time, Adrien and I left shortly after breakfast on the speedboat, along with Céline and Masud, who will do gravity stations by land and meet the Kokilmoni in Khulna at the end of the cruise. To save time, we will motor directly to Patuakhali, which is closer than Barisal, and meet Sanju and two others there. They arrived in Barisal from Dhaka that morning on the overnight ferry. It turned out to be more of an adventure than we expected. 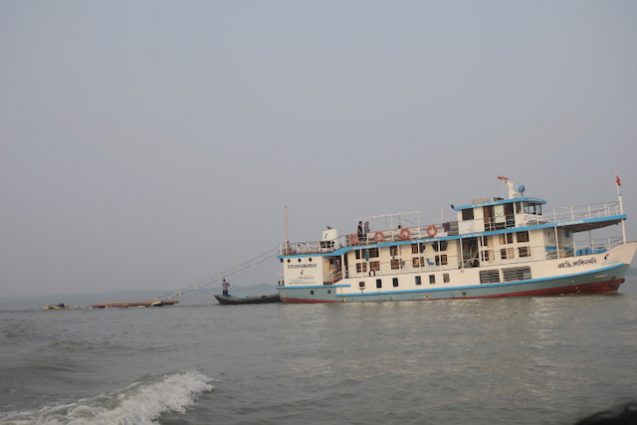 A view of the Kokilmoni towing the TEM array as we depart on the speedboat.

The speedboat had to frequently slow for fishing nets, so our speed was slower than expected. Then we encountered a sand bank where the water was too shallow. It took a while to get back to deeper water, including Romeo getting out and pushing the boat. Then we circled to the other side of the river. As we did the wind picked up and the waters became choppy, spraying us with water. When we got to the other side, we sheltered in a small side channel. 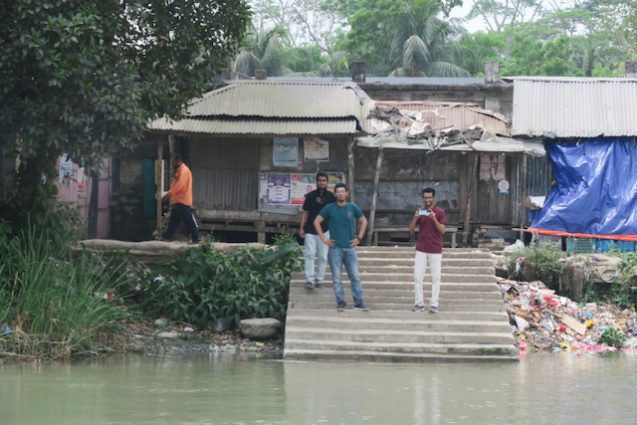 When we finally reached a ghat, Malik, Sanju, and Shohan were there waiting for us.

At that point, after almost three hours of traveling by speedboat, we turned out to be only 5 km ahead of the Kokilmoni. She had caught the rising tide and rode it north at a good clip. She picked us up and gave us a ride. Since time was going by, we changed plans. The car continued east from the university hosting our GPS, while we sailed north and across the river on the Kokilmoni, then through a set of channels and a small river on the speedboat to meet the car with Sanju. 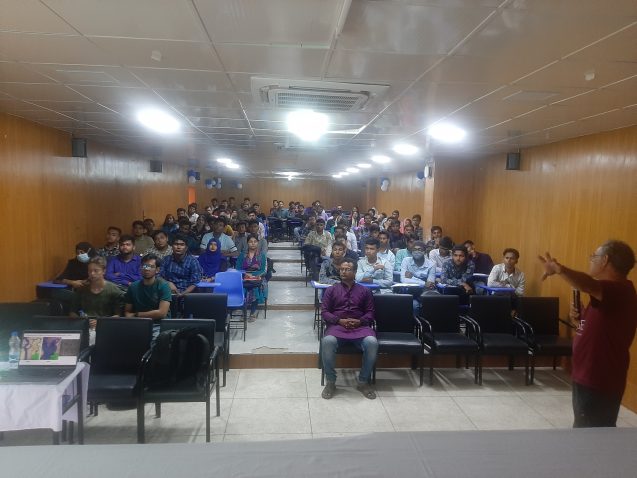 Giving a lecture on my work in Bangladesh at Barisal University. Hasnat is sitting at the front center and Adrien and Sanju on the left side.

We then drove back to the GPS station. The problem turned out to be a faulty cable. We did not have a spare, so with the help of Sarah Doelgar at UNAVCO in Colorado, we got the receiver in a position that worked while Sarah monitored it in the middle of the night in the US. We then rushed north to Barisal University, where I gave a talk, delayed by our mishaps. 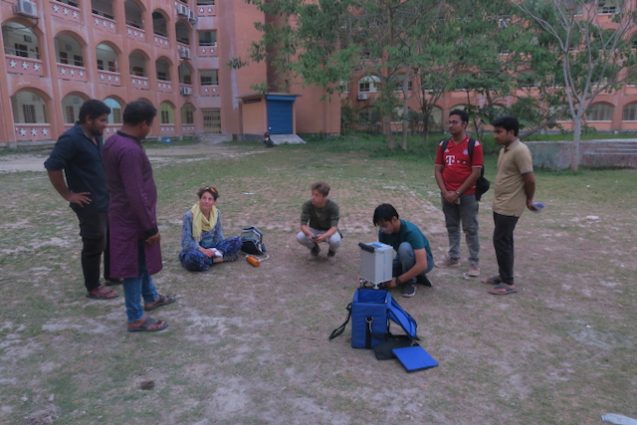 Masud, Hasnat, Céline, Adrien, and Sanju make a gravity measurement at Barisal University while a couple of Hasnat’s students watch.

To end the fieldwork, Sanju, Adrien, and I traveled from Barisal to Dhaka on one of the overnight ferries — something I had long wanted to try. It did not disappoint, and we arrived in Dhaka early in the morning. After two successful GPS repairs and our extensive EM survey (MT and TEM), the first of their kind in Bangladesh, it was time to return home. After a rapid COVID test and meetings in Dhaka, we headed to the airport to fly home. 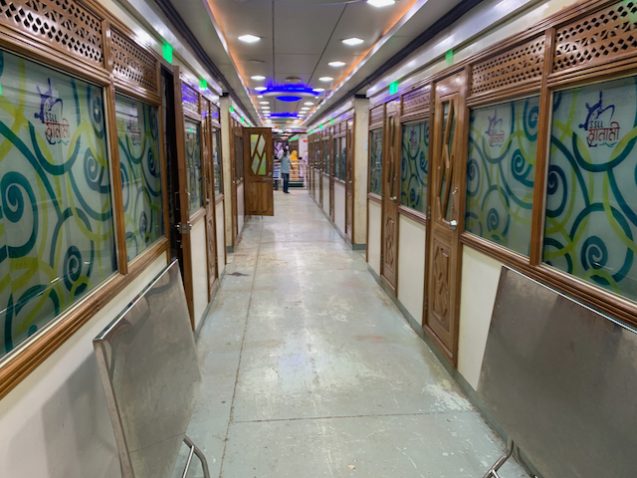 A view of the upper deck hallway with the higher quality cabins where we stayed. The lower decks had open floor space for groups to speed out blankets.