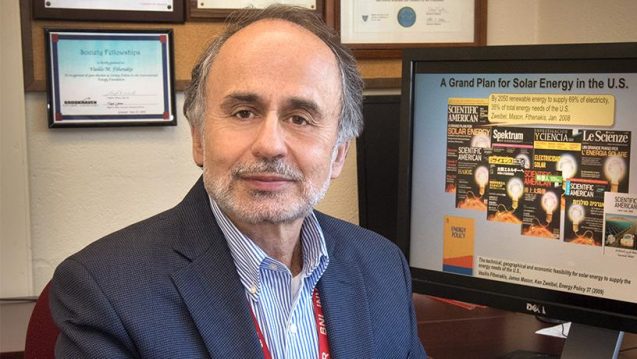 Vasilis Fthenakis of Columbia Engineering has received a prestigious award for his pioneering work in solar energy.

Vasilis Fthenakis MS’78, founding director of the Center for Life Cycle Analysis and adjunct professor of earth and environmental engineering and of electrical engineering, has won the 2022 Böer Solar Energy Medal of Merit. The award, accompanied by a $100,000 prize, honors a world-renowned researcher who has made pioneering advancements in renewable energy as an alternative form of energy.

Fthenakis has helped resolve concerns for rapid growth commercialization through groundbreaking work on variable renewable energy systems integration and life cycle sustainability analysis. He primarily works to solve problems at the intersection of energy and the environment, by developing predictive models, control technologies, and methodologies. Supported by the U.S. Department of Energy (DOE) and the International Energy Agency, he has created and led multi-country collaborations.

Fthenakis founded Columbia’s Center for Life Cycle Analysis in 2006 to guide tech and energy policy decisions with holistic descriptions of energy systems’ sustainability profiles. With a focus on developing methodologies, models, and tools to analyze cleaner energy alternatives, he has been a pioneer in studying the environmental impact and resource availability of photovoltaics, accelerating their commercial adoption around the world. In addition, his research into life-cycles of renewables, nuclear, and coal has advanced a broad range of sustainable technologies and policy reforms. More recently, he broadened the center’s research to explore renewable energy grid integration, solar-enabled water desalination and “green” hydrogen production.

Fthenakis joined Columbia Engineering in 2006 in a joint appointment with the DOE’s Brookhaven National Laboratory, where he spent decades as a senior research scientist, assisting the photovoltaic industry and developing novel photovoltaic recycling technologies; upon his retirement from BNL in 2017, he was awarded the status of Distinguished Senior Scientist Emeritus. The author of numerous books and publications, he is also a Fellow of the American Institute of Chemical Engineers, a Fellow of the Institute of Electrical and Electronic Engineers, a Fellow of the International Energy Foundation, and a co-founder and board member of the Global Clean Water Desalination Alliance.

Fthenakis has won numerous awards for his scientific achievements. These include the 2018 William R. Cherry Award from the Institute of Electrical & Electronics Engineers for “pioneering research at the interface of energy and the environment that catalyzed photovoltaic technology advancement and deployment world-wide.” Also in 2018, he received a $1.2 million grant from the DOE to advance solar-thermal desalination technologies and about $1 million in follow-up grants from the DOE and NREL this year. He also co-authored the textbook Electricity from Sunlight Sunlight: Photovoltaic-Systems Integration and Sustainability, which he uses in his course at Columbia.

Karl Wolfgang Böer, a visionary scientist whose work led to significant progress in the field of renewable energy, founded the University of Delaware’s Institute of Energy Conversion in 1972—it is the world’s oldest solar energy institution. The Böer Solar Energy Medal of Merit award was established in 1991 to honor Böer. Former U.S. President Jimmy Carter was the first to win the medal in 1993, and among the previous recipients are Zhores Alferov, 2000 Nobel Prize in physics, and Richard Swanson, founder of SunPower Corporation.

Adapted from a release by Columbia Engineering

The Paradox of Lithium
Subscribe
Login
0 Comments
Inline Feedbacks
View all comments
wpDiscuz
0
0
Would love your thoughts, please comment.x
()
x
| Reply
This website uses cookies as well as similar tools and technologies to understand visitors' experiences. By continuing to use this website, you consent to Columbia University's usage of cookies and similar technologies, in accordance with the Columbia University Website Cookie Notice.Close