Companies can go bankrupt due to poor business models, more successful competitors, or a decline in their target consumers. But as glacier retreat and droughts lead to lower river flows, hydroelectric power companies like Alto Maipo SpA (“Alto Maipo”) are adding climate change to the list of culprits.

On November 11, 2021, Alto Maipo, a Chilean subsidiary of the American Fortune 500 Company AES Corporation, filed for Chapter 11 Bankruptcy in the state of Delaware for its highly controversial hydroelectric power project on the Maipo River, southeast of the capital city of Santiago. In its bankruptcy filing, the company claimed that decreasing electricity prices in Chile and the effects of climate change on its water supply make its current financial structure unsustainable. The filing follows years of intense pushback from environmentalists and residents in the Maipo Valley and Santiago over the company’s diverting of the Maipo River, which is the main water supply for the city. Much of the scrutiny comes from concerns that the Maipo Valley is already overexploited by developers who have built mines, the El Yeso Dam, and several hydroelectric plants meant to subsidize mining—four of which are owned by Alto Maipo’s American parent company, AES Andes. 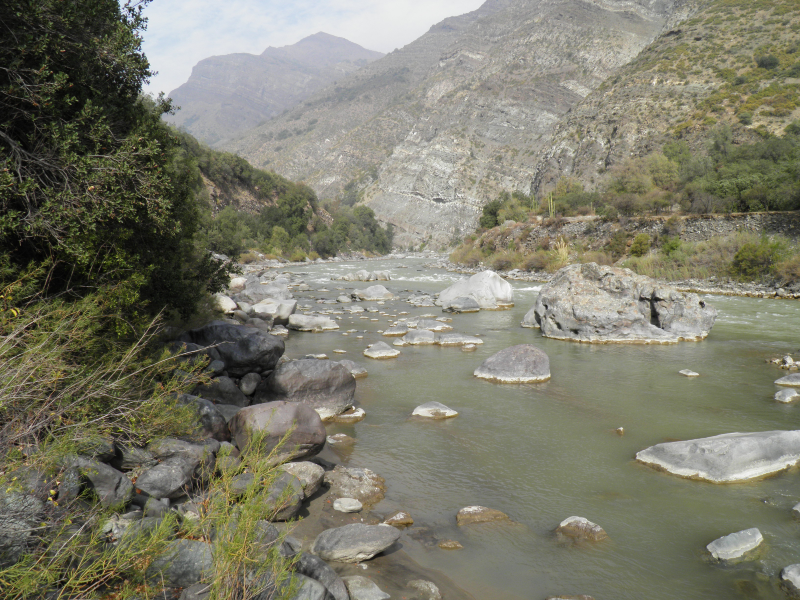 The Maipo River in Chile is 155 miles long and sourced from glaciers in the Andes. It is the main water supply for Chile’s capital city, Santiago. Source: Felipe Esturillo/Flickr

Construction of the Alto Maipo hydroelectric power project began in 2008 despite considerable opposition from residents of the surrounding valley and Santiago. The energy generated was meant to power mineral operations such as Los Pelambres, a copper mine north of Santiago.

Costs of the project have ballooned from $700 million to over $3 billion. Scheduling and construction setbacks have pushed the expected finish date by more than 9 years. It is now projected to be completed this summer. The project was expected to generate an average of 2,213 GWh of energy per year—enough energy to power Dallas, Texas, three times over—but generated just half of that (1,100 GWh) in 2021 in large part due to droughts and shrinking Andean glaciers. The loss of revenue from decreased water flow was a key factor in Alto Maipo declaring bankruptcy last November in the face of fractional energy outputs from the project that are trending downward.

While supporters of the project tout it as “run-of-the-river,” this label is not accurate, according to Carl Bauer, a water policy professor at the University of Arizona. Run-of-the-river projects are hydroelectric projects that place the turbines and generating plants directly in the river so that water flows through without being removed or held in a reservoir. The Alto Maipo hydroelectric plant is “diverting water and piping it through tunnels, eventually returning it quite a bit downstream” unlike a true run-of-the-river project, said Bauer.

The project diverts 43 miles of the river and its tributaries through a tunnel to turbines which generate electricity before returning the water to the river upstream of Santiago. Bauer notes this has significant environmental impacts and leaves areas of the basin entirely dry. This has led to considerable opposition from environmentalists, local communities in the Maipo Valley, and Santiago residents. Santiago’s city government has not opposed the project, but Bauer says that this likely is due to the upstream location of the water’s return, which leaves the urban water supply unaffected. 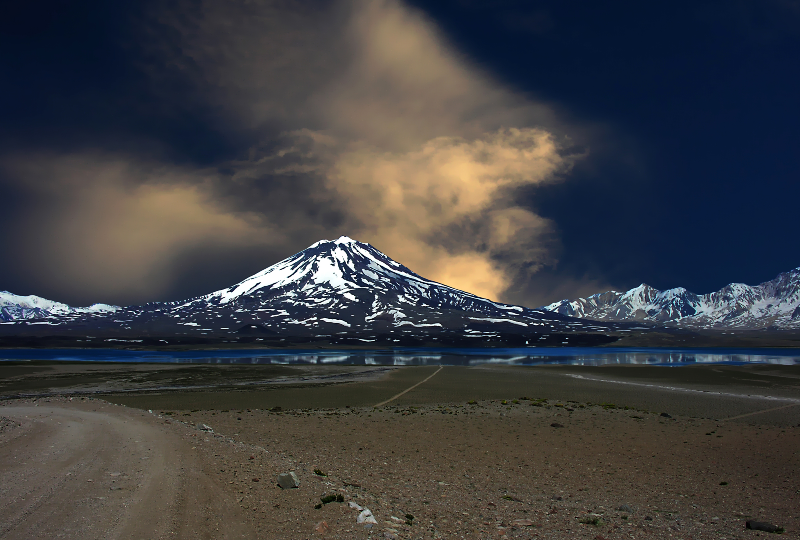 Glaciers on the Maipo Volcano in the Andes feed the Maipo River. Source: Carlos A. Bau/Flickr

Though Alto Maipo said in its bankruptcy claim that the droughts and low water flows were unexpected, critics such as NGOs No Alto Maipo and Ecosistemas have pointed out that the environmental and social impact assessment (ESIA) conducted in 2008 by Alto Maipo was flawed and incomplete. These organizations asserted that the ESIA used historical water flow data as a basis for the project rather than the current data at the time, leading to faulty projections in energy generation. Both movements are led by community coalitions and environmentalists that have opposed the Alto Maipo Project for over a decade.

In 2017, No Alto Maipo and Ecosistemas filed a complaint with the International Finance Committee (IFC), a global development institution and large investor in Alto Maipo. Unlike entirely private bank groups, the IFC is the financial arm of the World Bank Group, a bank of the United Nations focused on helping developing countries. As a result, it is more open than private banks to addressing complaints and allegations against the recipients of its funding if they are shown to be in violation of the UN’s policies.

No Alto Maipo and Ecosistemas stated that Alto Maipo violated the IFC’s policies on social and environmental governance, saying that the ESIA failed to acknowledge potential water shortages due to climate change. They added that the ESIA did not consider how the hydroelectric project would affect recreation, tourism, and drinking water in the valley. The IFC agreed with these charges, adding in their report that Alto Maipo did not properly consult affected communities. As a result, the IFC fully divested from Alto Maipo in May 2018. 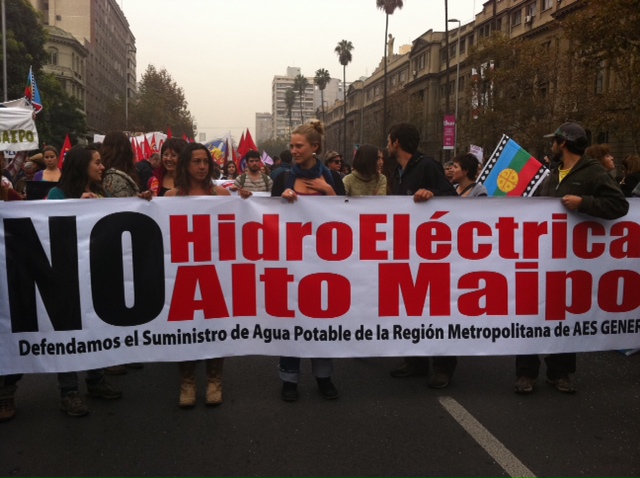 Protesters in 2011 call for people to defend drinking water from the Alto Maipo hydroelectric project in Chile. Source: Radio Tierra/Flickr

In the years before petitioning the IFC, as well as after, these groups organized large demonstrations, which have brought in people from dozens of organizations and professions. A 2010 demonstration included 300 muleteers from the mountain range around the Maipo Valley, a mass to pray for the water of the Maipo, and several Chilean senators and public figures. Other major demonstrations took place in 2013, 2015, and 2017 as well as a demonstration organized by women in 2019 and another led by local residents in 2020. More recently, a protest in 2021 brought together outdoor communities under the campaign “Save the Maipo,” organized by Patagonia, an American outdoor clothing brand.

Magdalena Gil, an environmental sociologist at the Catholic University of Chile and homeowner in the Maipo Valley, said that developers frequently fail to consider the full impacts of projects in the overexploited Maipo Basin. Hydroelectric plants, the El Yeso Dam, and mining operations put a strain on the water resources of the valley, which she notes has seen 15 years of drought and is “the number one tourist post in the metropolitan region.” Gil told GlacierHub that the Alto Maipo hydroelectric plant should not be discussed as a stand-alone project. “We need to discuss the sustainability of the Maipo Valley, which is the sustainability of Santiago and its metropolitan region,” she said.

Currently, the bankruptcy claims are under review by the Delaware District of the U.S. Bankruptcy Court. Alto Maipo is planning to restructure itself in a way that would give most of the control of the company to its parent company, AES Corporation, and not give junior creditors any recovery—a decision that is unpopular with those unsecured creditors. It argued on March 29 of this year that the courts should not allow the company to solicit creditor votes for its reorganization plan.

Not necessarily, according to Bauer. “Changing flows due to climate change will affect the economics and engineering of all water resource projects,” he said. However, he added that groups can take advantage of extra water coming off glaciers that are retreating, either for hydropower or freshwater storage over the next few decades. By targeting areas where glaciers are producing more meltwater as they recede, groups can utilize short-term projects that are less intrusive and exploitative of the rivers they are built on, said Bauer.

The bankruptcy of Alto Maipo demonstrates that developers need to use holistic, future-thinking approaches to renewable energy. Moreover, it shows the importance of prioritizing community voices in the face of climate change to protect vital economic, recreational, and municipal water sources like the Maipo River.