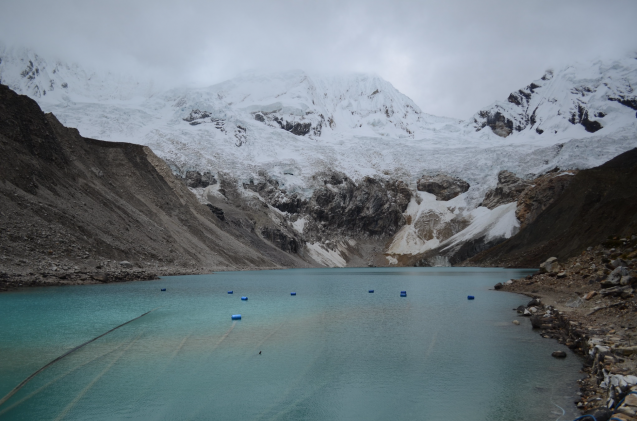 Lake Palcacocha in 2014. Siphons were installed in the glacial lake to lower the water level. Photo: Cooperación Suiza COSUDE/ via Flickr CC

A historic climate change lawsuit, Luciano Lliuya v. RWE AG, is ramping up again. Indigenous Peruvian farmer Saúl Luciano Lliuya is suing German energy company RWE AG for the costs of preventing the glacial Lake Palcacocha from flooding his hometown of Huaraz. After delays from COVID-19, the case is progressing again as German officials — including judges and court-appointed experts — arrived in Peru on May 25 to assess the level of risk posed by Lake Palcacocha.

The lake, which sits 4,650 meters above the regional capital Huaraz, has been growing in volume due to meltwater input from receding glaciers. The lake poses a substantial threat to the town below, as the increased volume could cause the lake to overflow and flood it.

RWE, a German multinational energy company, was the 297th largest public company in the world in 2020. According to the Carbon Majors Database, RWE has caused 0.47% of global post-Industrial Revolution carbon emissions, so Lliuya is suing for that proportion of the costs of flood prevention. In an interview with Noah Walker-Crawford, an advisor on the case, he explains that if Lliuya wins the money, it will be put toward flood safety infrastructure at the lake according to an agreement with the Ancash Regional Government (which is responsible for safety works at Lake Palcacocha).

Receiving this settlement would set a groundbreaking precedent that a corporation could be held liable for its contributions to global climate change. If Lliuya is awarded the damages, totaling 17,000 euros ($18,239), it would be a minimal expense for this massive corporation, but it would lay the foundation for much larger suits against other heavy polluters. 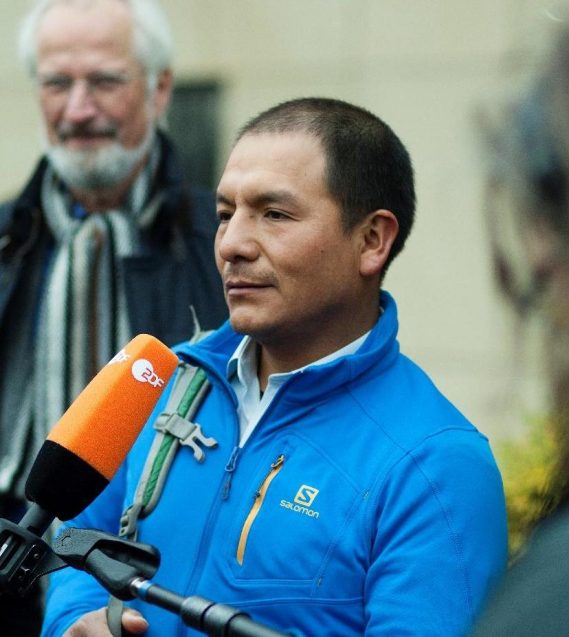 With the help of Germanwatch, a German climate justice organization, the case was filed in the District Court of Essen, Germany on November 24, 2015. Although the case was initially dismissed in December 2016, a 2017 appeal has allowed it to move into the discovery and evidence collection phase. There were delays due to COVID-19, as noted in previous GlacierHub coverage of the case, but with the arrival of the court experts in Peru, the case has moved forward. Lliuya argues that RWE has infringed upon his rights by being partially responsible for the creation of a threat that would prevent him from using his land. Lliuya must prove that the glacial recession can be attributed to climate change and that this poses a concrete enough threat for RWE to be held liable.

A peer-reviewed report published in Nature Geoscience asserted that greenhouse gas emissions have accelerated the retreat of the Palcaraju glacier above the lake, putting the town at increased risk of a devastating flood. The independent report goes even further, stating that the glacial retreat is “entirely attributable” to global warming. This statement corroborates Lliuya’s claim that the flood risk is due to climate change, and thus RWE should be held partially accountable.

German court-appointed experts are currently assessing whether the threat of flooding is a “real and imminent risk” to Lliuya’s property. Lliuya’s lawyer, Roda Verheyen, explains that although attribution to climate change is one of the main questions of the evidentiary phase, the court-appointed experts are actually there to investigate the personal risk to Lliuya’s house in the flood path. Verheyen elaborates, stating that “nobody who was there actually could question the fact that there is risk” and that the question lies in whether or not the risk is legally imminent enough.

The threat to the town has been known for years. In 1941, a flood from the same lake killed 1,800 people and destroyed a large portion of the city. Today, Huaraz is much larger and 50,000 residents live within the flood path. Additionally, the lake’s volume is 34 times larger than it was in 1970. Flood prevention measures have already been set. In 2011, siphons were installed to lower the water level. There is constant video monitoring, and a team of people dubbed “glacier guards” have been stationed near the lake. Additionally, the town has implemented warning sirens in case of flooding. This would afford the residents about a half hour to evacuate before the flooding reaches their homes. However, this warning system is not enough to protect the residents from the flooding, as the video monitoring often has issues. 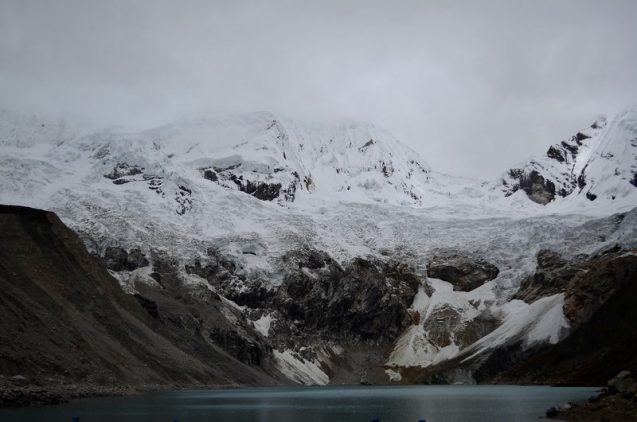 In an interview with GlacierHub, Rupert Stuart-Smith, a researcher at the Oxford Sustainable Law Programme who contributed to the Nature Geoscience report, explained how the swelling volume of the lake not only increases the risk of a glacial lake outburst flood, but how the receding glaciers may increase the likelihood of a “trigger scenario” that could cause lake overflow and subsequent flooding. Stuart-Smith asserts that there is “ample scientific evidence” for these trigger scenarios. The scenarios include avalanches or landslides entering the lake and creating waves which would send water spilling over its borders and eroding them. He explained that as the glacier recedes up the mountain, it destabilizes the soil by allowing for permafrost to melt. Destabilized soil increases the likelihood of avalanches or landslides and consequently increases flood risk as well.

The case was initially brought to obtain a declaratory judgment, monetary compensation, and an order requiring RWE to cease emitting. The court rejected Lliuya’s claims for declaratory judgment, which is when a court gives an exact opinion about the “nature of a legal matter,” along with his claims for monetary compensation and a court order. The court rejected monetary compensation, called damages, because money being awarded would not solve Lliuya’s problem. The court order for cessation, also called injunctive relief, was rejected because ordering RWE to cease emitting now would not stop the impacts of climate change from continuing to cause glacial retreat.

Despite these rulings against Lliuya, the central argument of his case is moving forward and presents both a new opportunity for climate change litigation and good news for the  environmental groups and Indigenous communities that have persisted in the fight against the fossil fuel companies. Walker-Crawford explains that this case has already set an exciting precedent that it is possible for companies to be held accountable for their contributions to climate change, simply because the court of appeals accepted the case. If this case is successful, it would open the door for more climate change litigation. Fossil fuel companies would have to start “pricing in” the costs of these suits, which have the potential to be much more expensive than the $18,239 at stake here.

Eventually, fossil fuel companies may have to set aside millions of dollars for potential expenses associated with litigation, which would encourage divestment from the companies. In addition, if climate change litigation becomes more successful, it could spur political action, which is ultimately the goal of these cases. Walker-Crawford describes climate change litigation as “an act of desperation” in the absence of government action. However, if Lliuya succeeds in his lawsuit, we may suddenly see these cases become the pathway to climate change action and a much-needed win for our planet.

Vajont Dam. Recall it in your nightmares. I read just this week about a flood in Italy caused by the construction of a dam at an area with unstable soil.The engineers kept trying to fill the dam and landslides would increase the level high enough that the reservoir would have to be lowered. Vajont Dam. The engineers figured that if another landslide occurred the reservoir would be low enough that only a 20 meter wave would be generated. Wrong. ‘260 million cubic meters of rock broke off from the top of Monte Toc, on the border between Veneto and Friuli Venezia Giulia. It fell into the reservoir of the Vajont Dam, producing an enormous wave of at least 50 million cubic meters of water.’