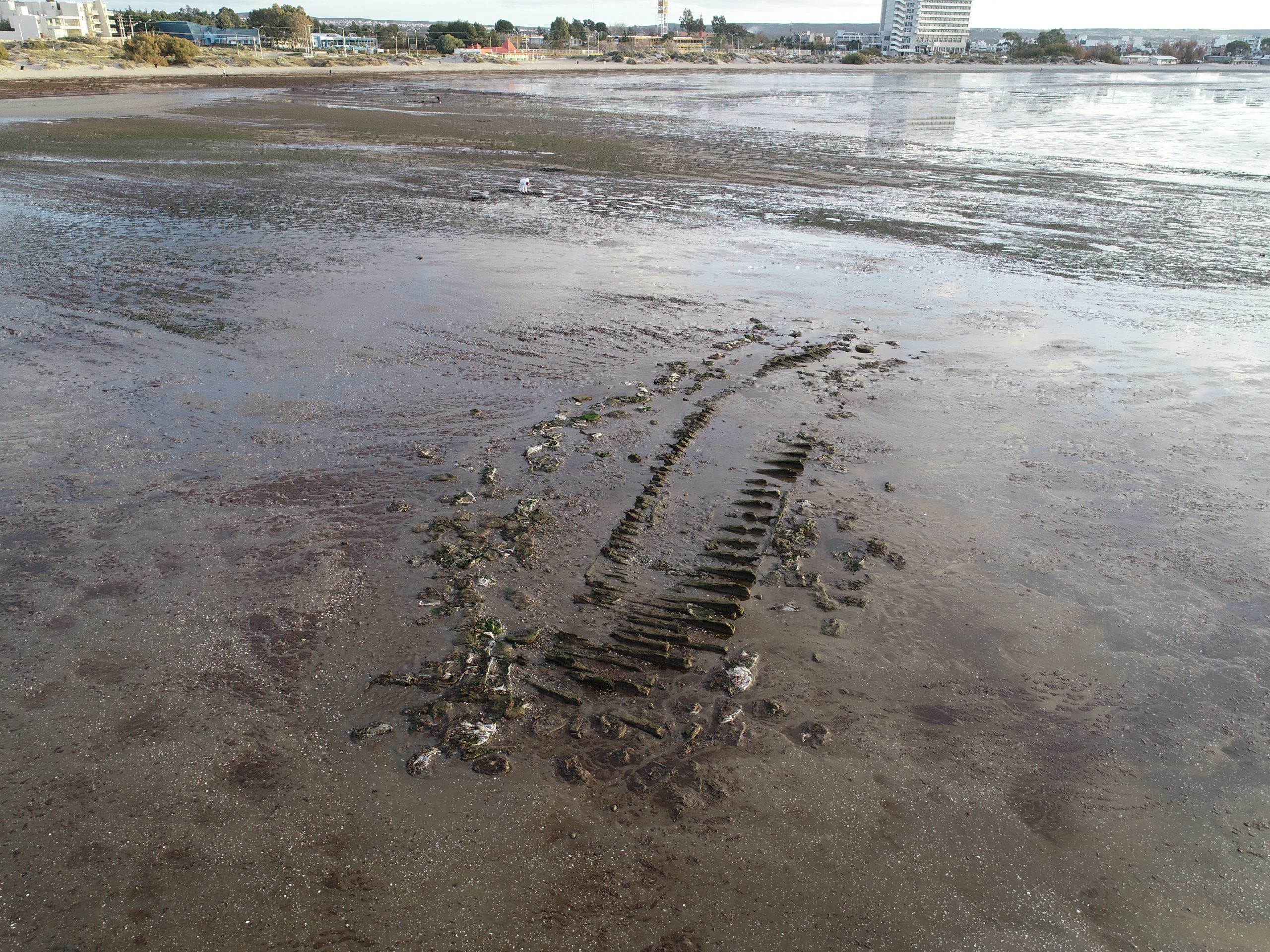 The wreck of a ship thought to be the 19th-century Rhode Island whaler Dolphin at low tide off Puerto Madryn, Argentina. (U. Sokolowicz)

Scientists investigating the remains of an old wooden ship off the cold, windy coast of far southern Argentina say it almost certainly is the Dolphin, a globe-trotting whaling ship from Warren, R.I., lost in 1859. Archaeologists have spent years researching the ship’s origin without making a definitive identification, but a new analysis of tree rings in its timbers has provided perhaps the most compelling evidence yet. A team of Argentinian and American researchers just published the findings in the journal Dendrochronologia.

“I cannot say with a hundred percent certainty, but analysis of the tree rings indicates it is very likely that this is the ship,” said lead author Ignacio Mundo of Argentina’s Laboratory of Dendrochronology and Environmental History, IANIGLA-CONICET. Mundo and scientists at the Columbia Climate School’s Lamont-Doherty Earth Observatory used a huge database of rings from old North American trees to show that the timbers were felled in New England and the southeastern United States just before the ship was built in 1850. Other evidence includes artifacts found near the wreck, and historical accounts from Argentina and Rhode Island. This appears to be the first time tree-ring science has been applied to identify a South American shipwreck.

“It’s fascinating that people built this ship in a New England town so long ago, and it turned up on the other side of the world,” said Columbia tree-ring scientist Mukund Rao, a coauthor of the study.

New England was a major player in the global whaling trade from the mid-1770s until the 1850s, when oil extracted from blubber was popular for lighting and lubrication, and whale bone was used in many small household items now made of plastic. Hundreds of Yankee ships roamed remote regions, often on voyages that lasted for years. The industry faded in the 1860s after whale populations were decimated, and petroleum came in.

According to an unpublished manuscript by local Warren historian Walter Nebiker, the Dolphin was built between August and October 1850, of oak and other woods. Normally trees were felled in cold weather a year or so before a ship was built, which in this case would have been between late 1849 and February 1850. Measuring 111 feet long and weighing 325 tons, the Dolphin was launched Nov. 16, 1850. Nebiker described her as “probably the fastest square-rigger of all time.” 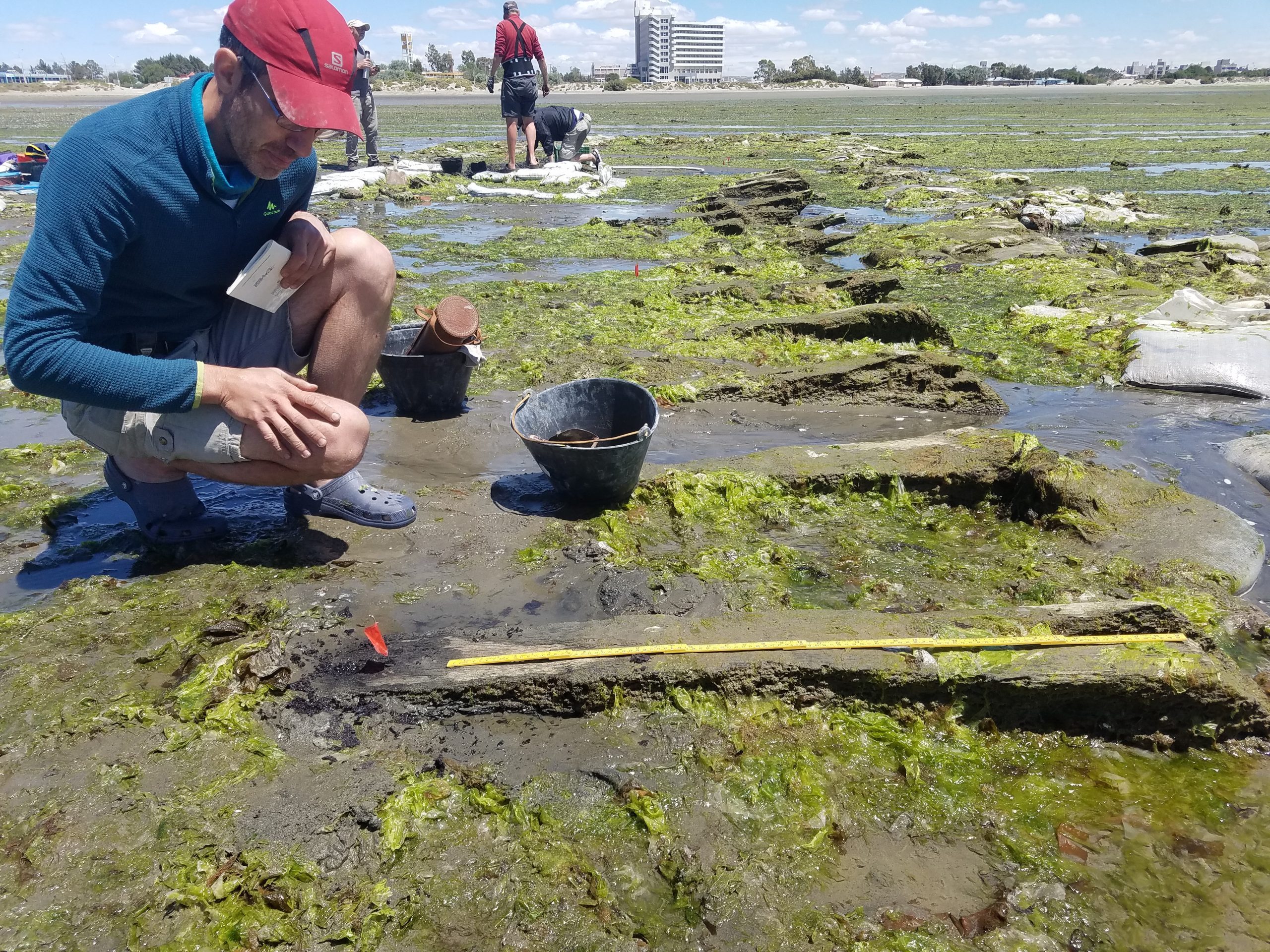 Lead author Ignacio Mundo measures one of the ship’s ribs in preparation for sampling. (Mónica Grosso)

The ship ranged across the Atlantic and Indian oceans for nearly two and half years, returning laden with oil in March 1853. Later trips took her to the Azores and around the Horn of Africa to the Seychelles, Zanzibar and Australia. Her last voyage started from Warren on Oct. 2, 1858. The ship ended up off Patagonia a few months later. A letter to the owners from her master, a Captain Norrie, said she was destroyed when she “lay upon the rocks in the southwestern part of New Bay”—an apparent reference to the Golfo Nuevo, one of Patagonia’s few good natural harbors, where whalers were known to put in. The crew would have sailed some 10,000 miles to get there.

Beyond ships that put in temporarily, there was no real European presence along the Golfo Nuevo until 1865, when Welsh immigrants landed on the site of what later became the city of Puerto Madryn. Local tradition has it that early settlers scavenged material from one or more shipwrecks, but it is unclear whether this was from the Dolphin or some other ill-fated ship or ships.

In 2004, shifting sediments revealed the partial remains of a wooden vessel in the intertidal flats just off Puerto Madryn. Locals knew it was there, but scientists had not. In 2006 and 2007, marine archaeologists including Cristian Murray of Argentina’s National Institute of Anthropology and Latin American Studies excavated the remains during low tides. They also documented several other other wrecks nearby.

About all left of the ship was some of the lower futtocks, or ribs, and some hull and ceiling planking. In a 2009 paper, Murray and colleagues determined that the ship was built probably in the 19th century, mainly of oak and pine from the Northern Hemisphere. But of what species and whether European or North American origin, they could not tell. With little else to go on—some brass nails, a single leather shoe—they speculated it could have been a fishing or merchant vessel—or a whaler. 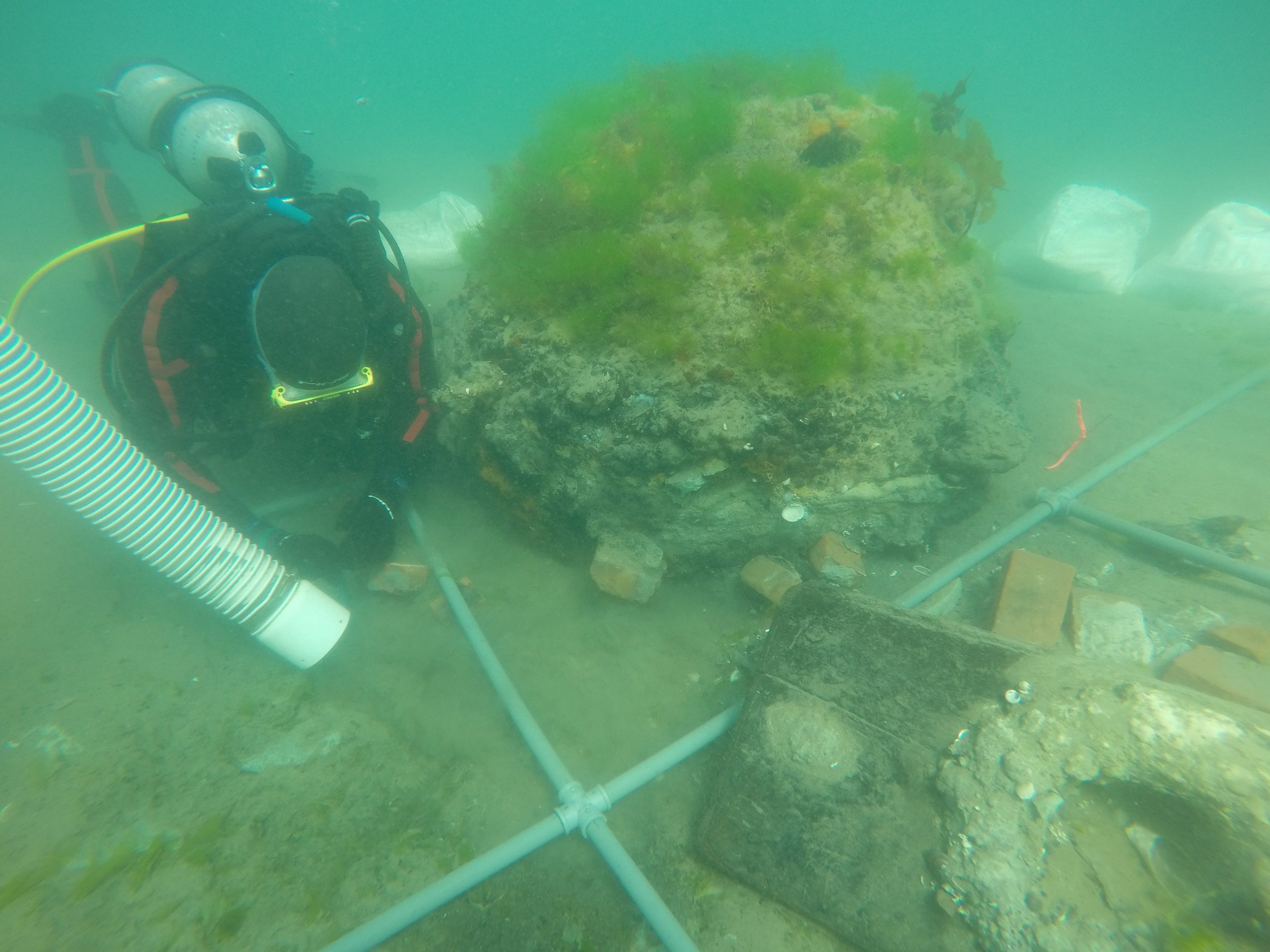 In deeper water near the wreck, next to the diver lies the heavily encrusted, upside-down remains of an iron cauldron, along with bricks from what might have been an oven used to heat blubber. Object to the right may have been a hawse pipe on the deck, where anchor chains passed through. (Courtesy PROAS-INAPL)

Other evidence eventually turned up. Two iron cauldrons and the remains of bricks were found near the wreck, suggesting a shipboard “try-works” for boiling down blubber. Murray and colleagues also discovered that Argentine mariner Luis Piedrabuena had rescued 42 crew members of the Dolphin; he took them to Carmen de Patagones, a town about 100 miles north, and from there the refugees hopefully made it home. Where would that have been? The Dolphin showed up in Lloyd’s marine insurance register as having come from Warren. The researchers then contacted the Warren Preservation Society, which provided Nebiker’s manuscript and other information.

Based on this, a local Rhode Island newspaper speculated in 2012 that the Dolphin had been found. In 2019 Murray finally published a paper suggesting this—but saying it could not be proven. Enter the tree-ring scientists.

That year, Murray and colleagues re-excavated the wreck and invited Ignacio Mundo to examine it. They were horrified when Mundo told them the only way to get decent samples of the sodden wood would be to chainsaw out a couple dozen cross sections of the ribs and planking, and dry them out. Eventually, realizing there was no other way, the archaeologists relented and picked out spots where they thought the least damage would be done.

After processing the samples in his lab, Mundo turned to Ed Cook, founder of the Lamont-Doherty Tree Ring Lab, a longtime collaborator with South American colleagues, and pioneer in dendroarchaeology, the science of pinpointing the age and provenance of old wooden structures. Cook has analyzed many old buildings in the U.S. Northeast, along with objects including an 18th-century sloop accidentally unearthed during excavations after the World Trade Center was destroyed in 2001. (He figured out it had been built of oak around 1773 near Philadelphia.) 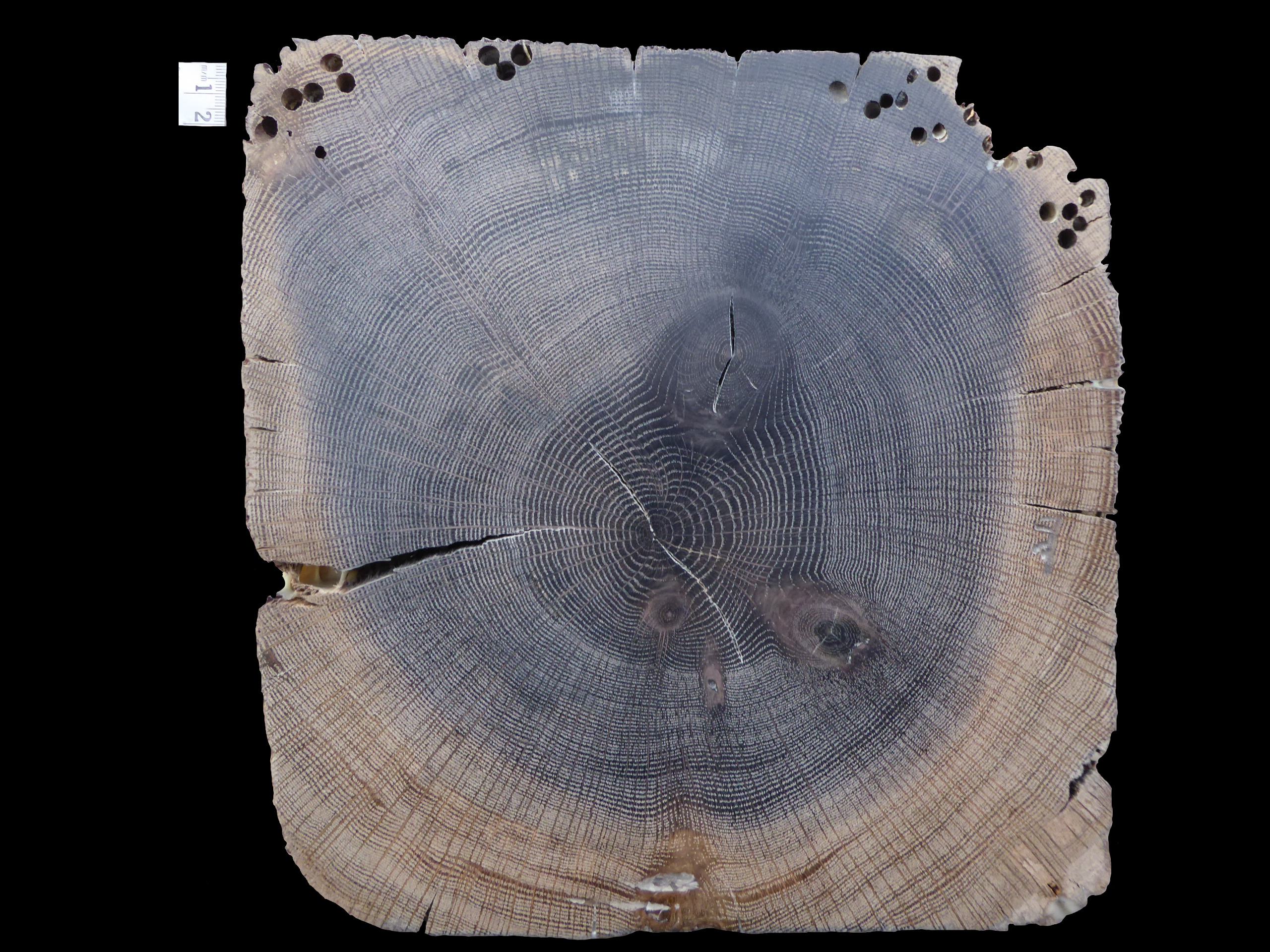 Cross section of a rib made of white oak (more specifically, a first futtock). This sample had 156 rings; its last ring was dated 1845. Holes in upper part were made by wood-eating marine worms. (Ignacio Mundo) 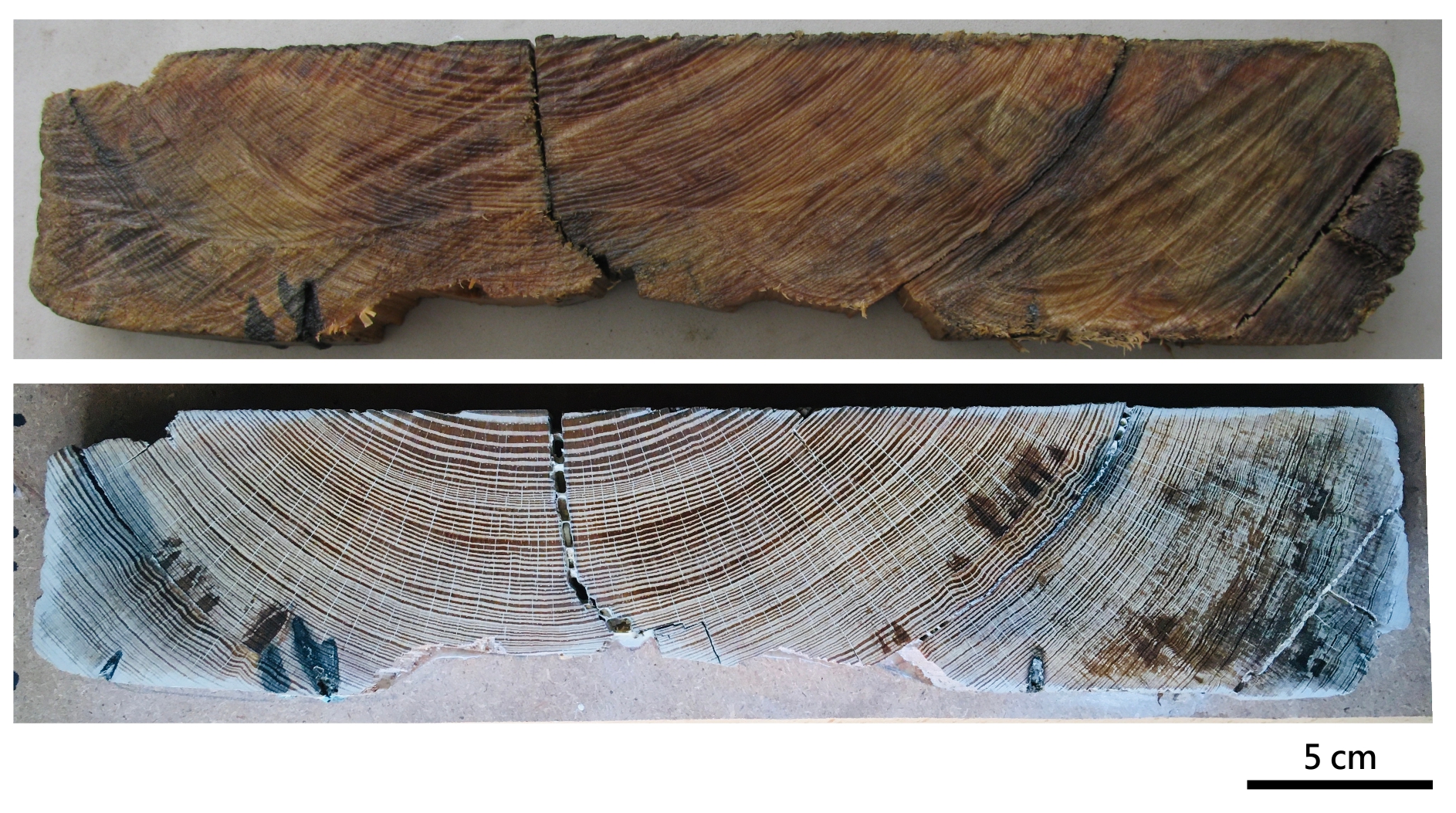 Cross section of a hull plank made of yellow pine. Upper panel shows the raw sample; the lower one, after sanding to make tree rings stand out, This sample contained 258 annual rings. (Ignacio Mundo)

Cook’s secret weapon: the North American Drought Atlas, a massive database whose creation he spearheaded in the early 2000s. The atlas collates ring samples from about 30,000 standing trees of many species across the continent going back more than 2,000 years. Varying precipitation levels create subtle yearly variations in ring width that allow researchers to chart past climates, date trees’ precise years of germination and growth—and in the case of old wooden structures, often where and when trees were cut, since climates vary from place to place, leaving distinct regional signatures.

The dendrochronologists determined that the ribs were made of white oak, many species of which grow in the northeast United States. The hull and ceiling planks, they could tell, were old-growth yellow pine, forests of which once covered much of the U.S. Southeast. Wooden nails holding things together were made of rot-resistant black locust, widespread across many eastern states.

Analysis of the oak rings showed that some of the timbers came from trees that had sprouted as far back as 1679. Most striking: The outermost rings indicated the oaks had been cut in 1849—exactly coinciding with the Dolphin’s 1850 construction. The latest rings in the pine planking came from 1810, but the scientists were unbothered by this; unlike the thick ribs, the planks would have been extensively milled down, so no one expected to find the outer rings.

The scientists then compared the rings to specific regional chronologies. Most of the pine samples matched well with chronologies taken decades ago from living trees in Alabama’s Choccolocco Mountain and Georgia’s Lake Louise areas, both known for exporting massive amounts of pine to the northern states in the 19th century. The researchers couldn’t say if the planks came from those sites specifically, but the signatures indicated that they must have come from somewhere in Alabama, Georgia or northern Florida.

As for the oak ribs, the rings most closely resembled chronologies taken from old trees growing in Massachusetts. Among the markers: distinct dry, low-growth periods in the 1680s-90s, 1700s and 1810s. The rings’ very narrow widths indicated the trees had grown in dense, old-growth forest—most of which was cut down in New England during the early to mid-1800s as loggers swept through. Many of those Massachusetts oaks undoubtedly ended up in the ship yards of next-door Rhode Island.

The new paper still hedges its bets, saying the ship may very well be the Dolphin, but absent some unique artifact associated with the vessel, it could conceivably be some other American whaler from the same time. “There were many whaling ships in that area during that time,” said Murray, who coauthored the paper. “So I don’t like to say it is the Dolphin until we can get more evidence.”

However, Mukund Rao, the Lamont dendrochronologist, says he is completely convinced. “The archaeologists are more conservative—they prefer a slightly higher standard, and I don’t blame them,” he said. “It’s true we don’t have something like the ship’s bell. But for me, the story is there in the tree rings.”

The paper was also coauthored by Mónica Grosso of Argentina’s National Institute of Anthropology and Latin American Studies, and Ricardo Villalba of the Laboratory of Dendrochronology and Environmental History, IANIGLA-CONICET. Ignacio Mundo is also an adjunct professor at the Facultad de Ciencias Exactas y Naturales, Universidad Nacional de Cuyo.