Every winter, the carcasses of recently spawned chum salmon draw hundreds of bald eagles from across western North America to the Pacific Northwest rivers in search of food. However, as salmon populations decline due to climate change and other stressors caused by humans, eagles may struggle to survive on this dwindling food source. A new study found that the eagles are redistributing to other habitats — including agricultural sites like dairy farms — to find food. 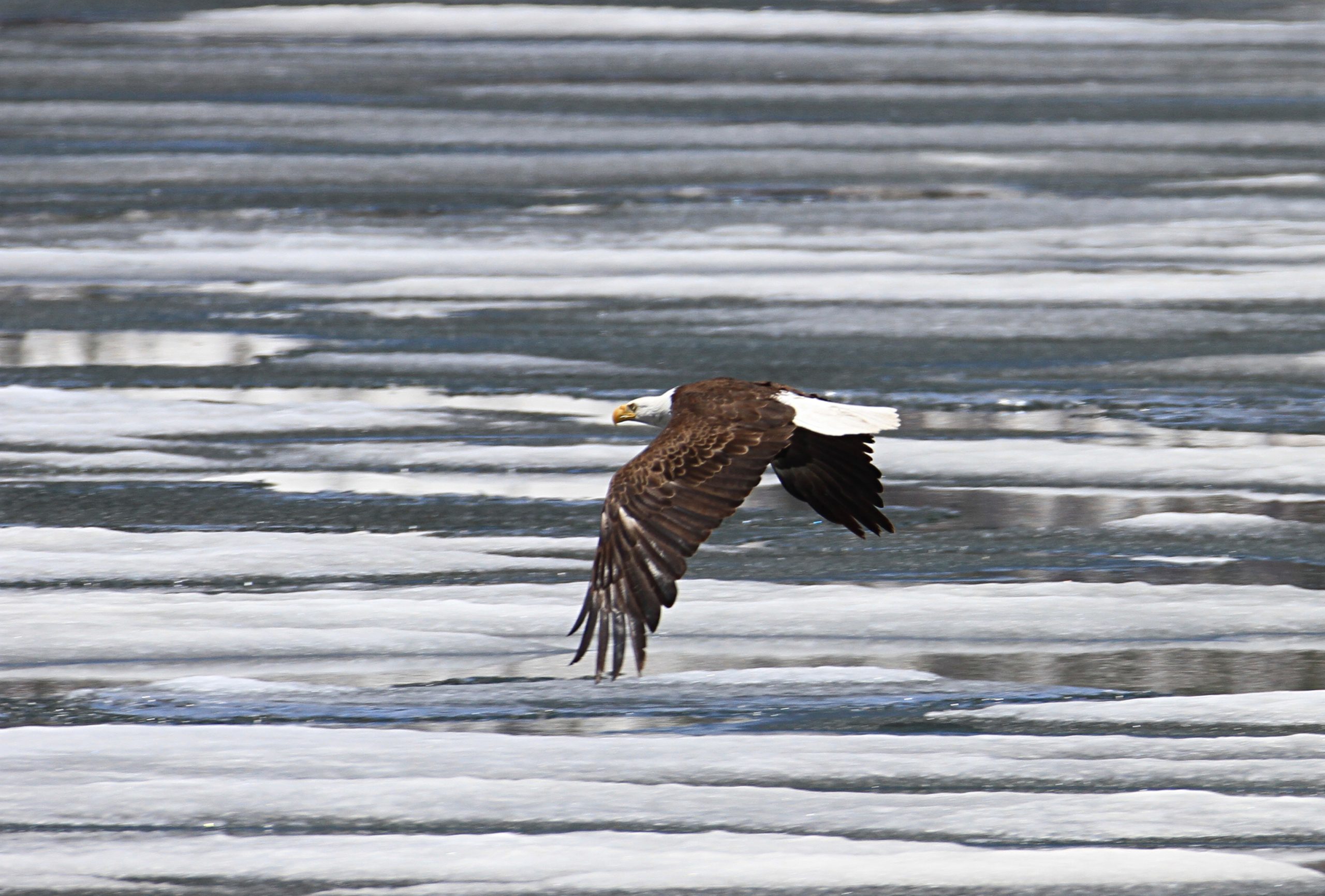 A bald eagle flies over a partially frozen lake during the winter in search of food. Photo: Jim Peaco/Flickr

This is not the first time that eagles have been threatened by human activities. During the mid-20th century, the pesticide DDT devastated America’s bald eagles. The chemical accumulated in the bodies of predatory birds like eagles, and it led to thinning of their chicks’ eggshells, significantly reducing their reproductive success rate. By the 1950s, bald eagles had been completely wiped out of Washington and nearly out of the United States. However, in 1972, DDT was banned after the book Silent Spring by Rachel Carson made people realize the crushing impact of DDT on wildlife, and eagles were able to make a comeback. In 2007, bald eagles were removed from the federal Endangered Species Act and a decade later removed from Washington State’s protected species list — a huge success story for conservationists and eagles alike.

Now, the birds are facing a new threat.

Bald eagles migrate seasonally in search of food — especially chum salmon, their favorite. While some eagles don’t migrate at all if they continue to have access to food throughout the cold winter months, others move to areas with open water when lakes and streams freeze over in the winter. Northwest Washington, with its free-flowing rivers and open seas filled with salmon, has historically been a refuge for these migrating eagles during the winters. Adult salmon reach the end of their lives after returning to breed in their birth stream. Following the annual fall spawning of chum salmon, thousands of carcasses litter the banks of Washington rivers.

However, declines in the availability of salmon over the past century now threaten these eagles and other species that have long relied on the fish. Climate change has led to heavy river flows and floods in Washington in late fall that have washed the dead salmon out to sea before they can be eaten by the eagles. In addition, many salmon populations in the region have shrunk due to other human-caused changes to their habitat, including dams and warming streams. Stream temperatures in recent years have spiked as glaciers retreat and provide less cool water, atmospheric temperatures increase, and intense heat waves become more common. These changes are bad news for a cold-water species like salmon that can experience heat stress and die when water temperatures rise too high, and it’s bad news for the predators that rely on them, too—including bald eagles. 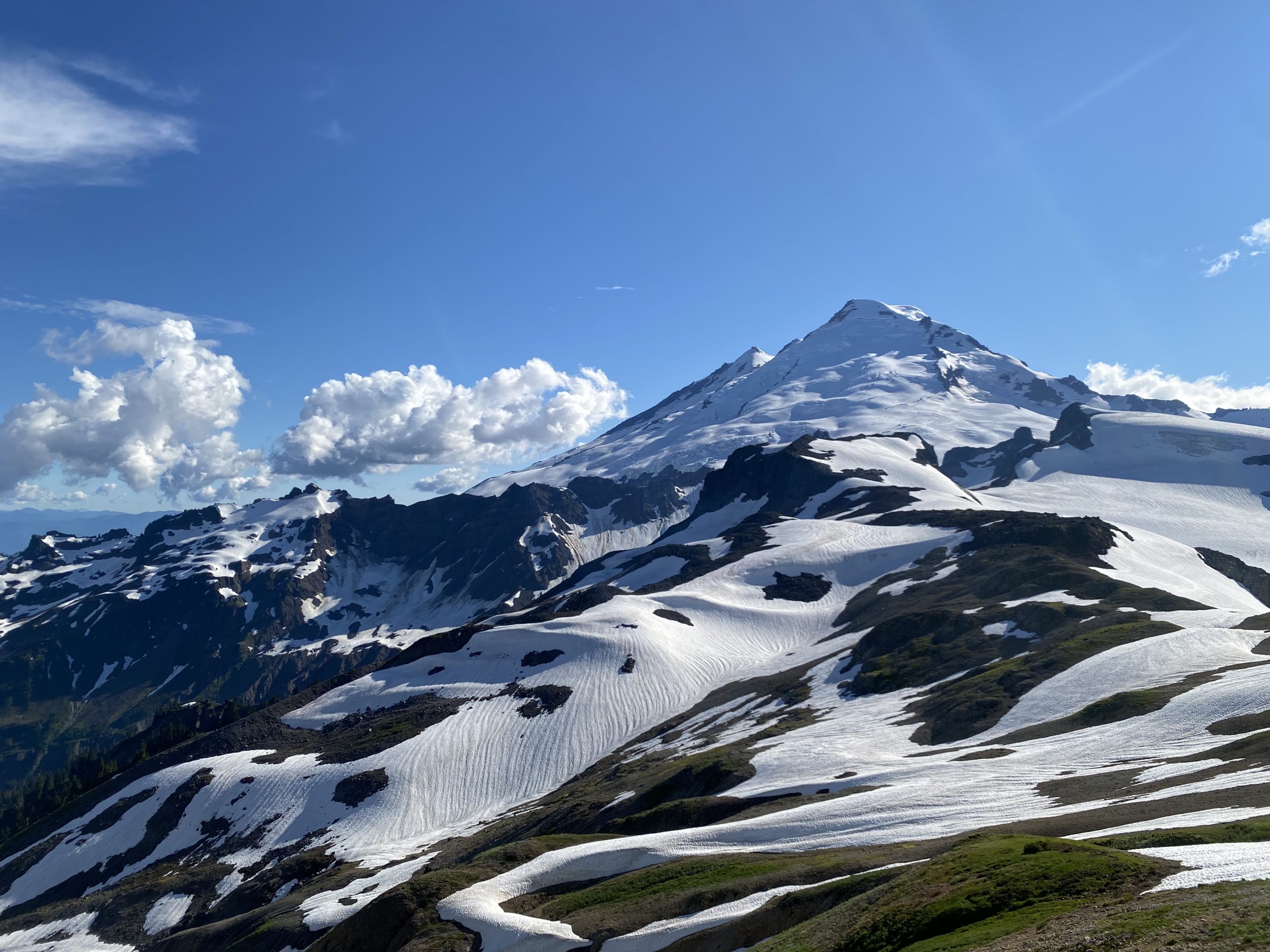 The Sholes Glacier on Mt. Baker, which feeds the Nooksack River and provides cold water to salmon in the summer, has been rapidly retreating over the past few decades. Photo: Jenna Travers

To understand how feeding, migration, and habitat patterns of bald eagles in the Pacific Northwest might be changing in response to climate change, Ethan Duvall, a Ph.D. student in the Department of Ecology and Evolution at Cornell University, surveyed eagles in a river basin in northwest Washington State for two years and compared his data to previous papers and research. His findings, soon to be published in Northwest Science, show that due to impacts of climate change on salmon populations, “a large proportion of congregating eagles redistribute [from rivers] to agricultural areas” in search of other food sources.

Duvall decided to start this study toward the end of his undergraduate degree at Western Washington University. In an interview with GlacierHub, he cited a passion for ecology and ornithology and a desire to conduct independent, relevant research as his motivation for undertaking this long project. He surveyed a 30-kilometer stretch of the Nooksack River every week during the winter months and compared his data to previous surveys in the same area dating back to the 1970s. This extensive dataset allowed him to understand not only the current patterns of bald eagle migration and feeding but also the long-term changes due to anthropogenic pressures.

In an interview with Duvall, he explained that bald eagles in the Pacific Northwest “respond directly to the availability of salmon carcasses.” As chum salmon populations have declined, eagles have begun to search for food in other areas, especially agricultural areas. The eagles have primarily concentrated near dairy farms and duck rafts, eating bovine placenta and duck carrion, per the study. 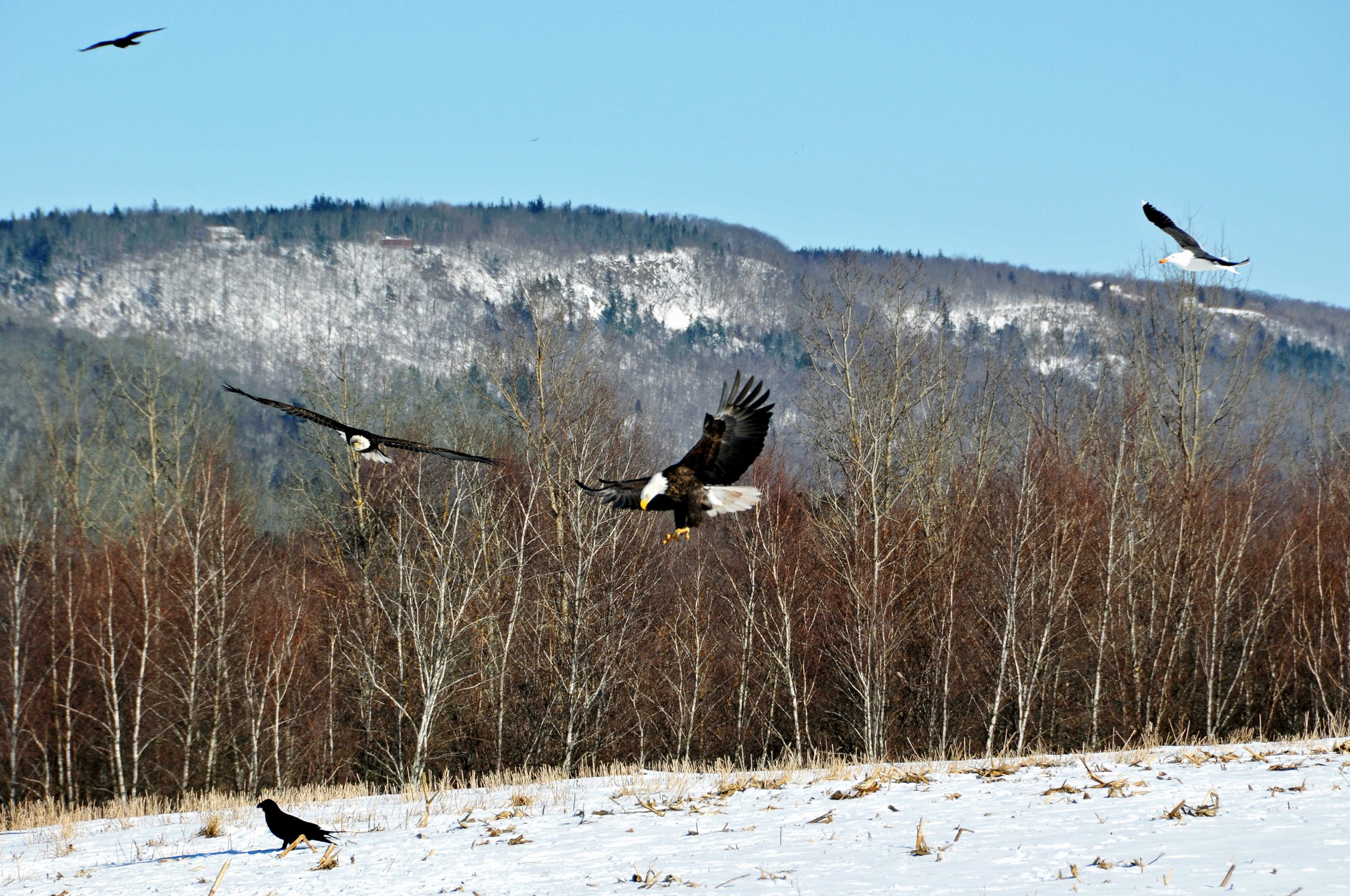 Eagles on a farm swarm in response to farmers feeding them dead chickens. Photo: Dennis Jarvis/Flickr

The study also revealed a striking difference in eagle abundance between two different watersheds in Northwest Washington, emphasizing how differences in riparian management can drastically change ecosystems. Since the 1970s, eagle abundance on the Nooksack River has increased dramatically, concurrent with relatively healthy salmon runs. However, on the neighboring Skagit River, it’s a different story. Duvall says that “eagle abundance has dramatically decreased, coinciding with a dramatic decline in chum salmon populations largely due to dams.” Eagles in this area have had to relocate to the Nooksack River or agricultural sites near the Skagit to find food.

In terms of eagle conservation, Duvall emphasizes that “it is imperative that we protect our salmon populations and work to mitigate anthropogenic disturbances on our rivers.” He notes that if environmental managers and conservationists do not act to resolve the issue of declining chum salmon in the Skagit, both chum and eagle populations may not persist there. As climate change worsens, more salmon runs will be threatened with local extinction—a phenomenon where a population no longer survives in a place it once lived even if it survives elsewhere. This, in turn, threatens eagles and people that rely on salmon for subsistence, cultural, and economic reasons.

This study highlights the importance of addressing the ways humans are impacting rivers and the species that rely on flowing, clean water in the Northwest. Without human action, bald eagles will no longer be able to rely on this area of the US for food during the winter months.

In the past, our society rescued bald eagles, and other species, by undertaking the challenging task of weaning our economy off toxic pesticides. It remains to be seen whether we will undertake the larger task of transforming our energy systems to wean them off fossil fuels, reduce warming, and protect salmon, eagles, and other species threatened by climate change.