Clean energy Archives - Page 2 of 2 - State of the Planet 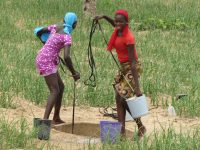 Pushker Kharecha and James E. Hansen write about their recent paper on the long-term health effects of nuclear power versus fossil fuels, and argue that nuclear power needs to be part of the solution to climate change.

Pedaling to Power a Movement: An Invitation to Join Climate Ride 2013

Student Scott Miller, who raised $3,000 for the Earth Institute last year on a 300-mile bike ride from New York to Washington, plans to do it again, and he’s inviting you to join him.

The Policy Buffet (Part 3): As Kerry-Lieberman Fades, a Fresh Start for Cap-and-Trade?

This is the third post in a series that covers the Senates current energy and climate proposals. The introductory post can be found here. The American Power Act (APA), co-sponsored by Sens. John Kerry (D-Mass) and Joe Lieberman (I-Conn), has been seen by many as a paradigm for comprehensive energy and climate legislation. The bill… read more

The Policy Buffet (Part 1): Making Sense of the Senate’s Climate and Energy Proposals

Advocates for energy policy reform and legislative action on climate change have long anticipated their opportunity to effect change. This summer may be the turning point they have awaited. In recent weeks, energy and climate policy have taken over the political limelight. The devastating oil spill in the Gulf of Mexico has forced Americans to… read more

When High Hopes Make Little Sense: Why the Hartwell Paper Fails to Deliver

Earlier this year, 14 energy academics, analysts and advocates gathered with hopes of reinventing the way the international community treats climate policy. The result, The Hartwell Paper: A new direction for climate policy after the crash of 2009, aims to examine “all aspects of the crisis which enveloped global climate policy” last December during the… read more