The Madhabkundu Waterfall formed due to faulting of the Patheria anticline.

Up to now, each group in our Bangladesh project has worked individually on fieldwork in their subject of expertise. Now that our project is now in it’s third year, we decided it was time to get together in the field to integrate our results. A major focus of the project is the interaction of tectonic forces and sedimentary processes. This week, is our opportunity to have experts on each interpreting the same outcops together. We have gathered a group of 9 Americans and 7 Bangladeshis in Sylhet in NE Bangladesh to what we have termed the “conclave”. I guess we have to send up a puff of white smoke if we all agree. Sylhet is an area where the large basement block of the Shillong Plateau and the Dauki Fault that bounds it meets the fold belt of the Burma Arc with its tea garden covered anticlines. It is also has a rapidly subsiding basin being filled with sediments in which the level of the rivers go up and down with sea level. Lots to see through different prisms. On top of the excitement of the conclave, we have a film crew from the American Museum of Natural History with us for the first 6 days to make a video to be shown in the AMNH and other museums about our project and the science we have been working on. After they finish, will we have another film crew from a company that makes PBS documentaries following us. Steve Goodbred examines the rocks at the Madhabkundu waterfall.

Everyone is doing their individual fieldwork before or after the conclave. Several of us arrived in Bangladesh just before the conclave, while others drove over from their fieldwork in western Bangladesh and two crossed the border from studying the Shillong Plateau in India. We all arrived and filled all of the rooms in the Shuktara Nature Retreat. For our first day, we headed to the Patheria Anticline with the Madhabkundu Waterfall. While the waterfall was spectacular, if took most of the day to get there. Pulling out maps after breakfast, we spent time discussing the region, slowed by the filming. Then the drivers took a wrong turn that took us and hour out of our water plus another ½ hour to double back via a faster road. It was 2:30 by the time we got there and almost 3:00 when we finally reached the falls. While there were great outcrops, we only had a hour there before having to start back. It was too late to visit our second stop and quite late before our cranky group got back to the resort for dinner. Overall, a disastrous first day. Nano Seeber explaining the geology to the conclave group.

Having gotten our bad day out of the way early, we had nowhere to go but up. And it did. We headed north toward the border with India and the Shillong Plateau. At the first stop we got an overview and our first view of the 2000 m high mountain and the geology while standing on one of the folds that mark the frontal area of the Dauki thrust fault. Then we went on to the Rangapani River where the large boulders are washed down from the plateau. There is a huge industry in Bangladesh mining rocks and gravel from the rivers along the border. Bangladesh has a shortage of rock that can be used in construction, particularly making concrete. The Indian border is clearly marked by the presence of rocks. On the Bangladeshi side they have all been stripped away and they are digging Mining of rocks from the Rangapani River. The edge of the boulders in the distance is the Indian border.

pits to mine the rocks from the older river sediments. This results in beautiful exposure of the sediment layers and we scrabbled around in a pit while the workers mined the rocks around us. After a brief stop at the border crossing where trucks bearing rocks enter Bangladesh, we went to Jaflong, where the mining industry is even larger. The amazing thing about Jaflong is that besides being an industrial site with rock mining and noisy rock crushers, it is also a tourist site where people come to see the mountain. There are tourist kiosks, snack stands and guides mixed in with the industry. For us, there were also outcrops of the older strata from before the uplift of the Plateau. Our final stop was a visit to our GPS and seismometer station at Jalfong. Humayun and I were filmed explaining our work there while the others visited the geology exposed on the side of the hill we were on. Humayun and Chris discussing the geology at Jaflong with Eocene limestone in the background.

Day 3 was an exciting trip up the Shari River. We rented three wooden country boats and sailed up the river, crossing through exposures of sediments of various ages. The originally horizontal layers of strata have been deformed from the tectonics. The dip of the sediments started at 38° then increased to nearly vertical before decreasing back to ~45°. This folding is due to the sediments riding over structures beneath, possibly a fault. We also saw that the oldest sediments were marine and the seceding layers went to estuarine and then fluvial (rivers) due to the increasing amount of sediments coming from the Himalaya. Our boats traveled together and occasionally leap frogged from outcrop to outcrop. Chris Paola, our river specialist, also noted changes in the shape of the river indicating active tectonics. Our group of specialists is coalescing into a team. Meanwhile, we passed other teams of people dredging the sand and gravel from the river bottom using buckets into their boats. Our boats arriving at an outcrop along the Shari River. 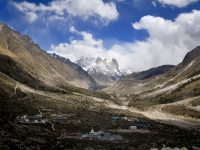 What an interesting project. I hope to see the AMNH and PBS videos when they are released.

Winter 1989 I had an opportunity to do semi-detailed mapping along Dauki fault(s?)d I have lots of observations and obviously lot of questions. I wish I could share.

Good to learn so much of geology from you. Keep it up.

I went to Dawki site today and have seen the sand and gravel mining going on there. Dawki fault with it’s amazing rock structure surely lures earth scientists to inquire about it…..the Meghalaya plateau itself is a treasure and store of geological remnants which attracts all of us…..