Our experience in in Bangladesh in nothing will go as planned, but somehow we are able to get everything done.  Living in this ever changing land beset by numerous natural disasters has made Bangladeshis incredibly resilient and adaptable.  This was tested over the last few days – and may continue to be over the next weeks – by a hartal.  A hartal is a strike in which transportation is shut down.  The party calling it sets up roadblocks and attacks cars and buses on the streets.  Bicycle rickshaws and the green baby taxis are OK.  This one was called by Jamaat-e-Islami, the largest Islamic party.  The reason was that their leader was sentenced to life imprisonment for war crimes during the 1971 Independence War.  The religious Walking up the anticline, we examine the outcrops near the Khadim tea factory.

parties supported remaining part of Pakistan and are accused of helping the Pakistani Army in killings.  Estimates are that 3 million people were killed in the war for independence with Hindus and intellectuals particularly targeted.  The leader on trial was specifically accused of killing 12 and assisting in the killing of 369 others.  The problem is that the Jamaat-e-Islami is part of the opposition coalition and many believe the trials are politically motivated to take down part of the opposition before the elections later this year.

On Feb 5, there was a hartal called that ran from 6am-6pm.  Driving around in our vans was our of the question.  Luckily, it was the day to visit outcrops on the Sylhet anticline, where our hotel is.  The sites at the airport and cricket stadium At the forested anticline we saw a number of monkeys.

were out of the question.  We found out later that there were bombs thrown in Sylhet, although, thankfully, no one was hurt by them.  The third area of outcrops we planned to visit were right by our hotel.  We walked to the sites situated by the tea gardens and tea factory to see them.  They were not the greatest outcrops, but still provided valuable new data and discussions.  We returned to the hotel for a late biryani lunch, a step up from the cold packet lunches we’re been having.  For the rest of the afternoon, we held discussions around our large poster-sized maps, or relaxed.   The Bangladeshi students took advantage of the early night to go into town after the hartal ended.  This was also the day that the AMNH team was doing interviews, so we were able to have people walk back and forth to their makeshift studio in one of their rooms. To travel around during the hartal, we pilled into a small pickup truck.

More serious was when a second day of hartal was called for Feb. 6.  The visit of the U.S. Ambassador to Bangladesh to our group was cancelled.  But what were we to do now? We were to visit outcrops to the north and one of our drilling sites.  After exploring several options, Humayun rented a very small pickup truck.  This type of vehicle should be exempt from the hartal.  To play it safe, we started our work by continuing along the same small road over the anticline that we walked on the day before.  There are no roadblocks on a small country road.  We continued the geologic work over the anticline. These young weathered sediments were hard to interpret confidently. However, we did see the dips of the strata switch from towards the south to towards the north A local elementary school for the villagers on the Sylhet anticline. A super zoom camera is good for shooting into the classroom.

as we went over the crest of the anticline.  We crossed where the floodplain sediments lap up against the folded strata.  Our excitement about the interactions we are having in the field continues to grow.  After completing this part of the drive, we came to a decision point.  Would we continue to the main road and risk facing a possible roadblock?  Did we want to travel that far on the back of a pickup?  In the end, our group split up.  The film crew rented a baby taxi and went off to get footage of the countryside.  A second group walked back to the road over the anticline to visit more outcrop and pick potential drilling sites.  Steve Goodbred was excited enough by what we saw to change tomorrow’s drilling site from the floodplain to the anticline.  The interaction We made it to Jaintiapur despite the hartal where Humayun showed us the evidence of a long gap in sedimentation that resulted in the devlopment of a particular rock indicating a long exposure.

at the conclave was now altering our project plans.  It is working. The last group, including myself, continued as planned with the pickup.  Not only was there no roadblock, but it was a pleasure to drive through Bangladesh with so few cars on the road and so little traffic.  We got to the well site as they reached the maximum depth they could drill.  Gas in the sediments impeded the drillers ability to lift the sediments out of the hole. We could see the gas bubbling up.  We continued on to Jaintiapur and took a pleasant hike through a new set of outcrops and beautiful views.  I personally found the evidence of a long gap in sedimentation 20-30 million years ago puzzling.  As darkness fell, we had to leave the solution for another day.  But at least the 2-day hartal was over. 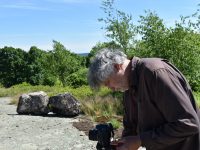 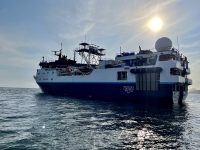 Looking for the Origin of Slow Earthquakes in the Guerrero Gap
Subscribe
Login
0 Comments
Inline Feedbacks
View all comments
wpDiscuz
0
0
Would love your thoughts, please comment.x
()
x
| Reply
This website uses cookies as well as similar tools and technologies to understand visitors' experiences. By continuing to use this website, you consent to Columbia University's usage of cookies and similar technologies, in accordance with the Columbia University Website Cookie Notice.Close